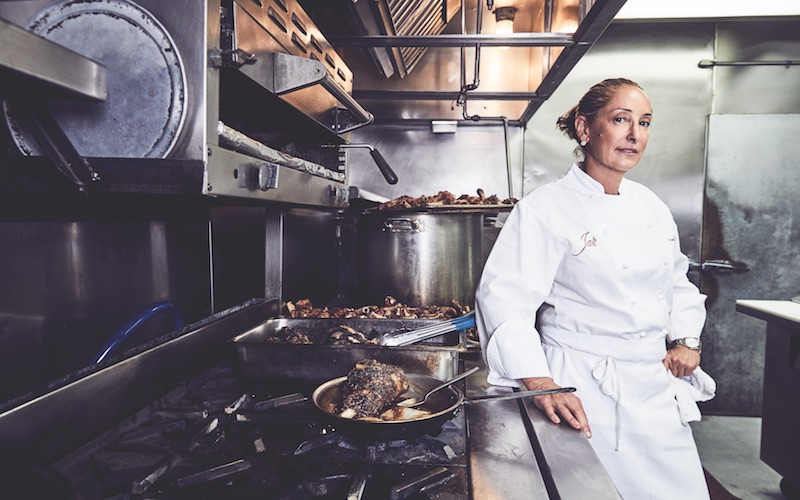 A certain mythology represents chefs as buccaneers who toil over flames and party till dawn. That image might sell for Anthony Bourdain, but it’s hardly reality. The unglamorous cycle of exertion and recovery that is a chef’s routine is practically anti-clickbait, yet the ability to find balance is what separates those who last months and those who last decades. When you’re spending years pulling double shifts, you need to find a way to recharge, maintain focus, and stay sane in the process.

The way Suzanne Tracht sees it, the time she spends swimming laps at the Culver City Plunge (three times a week in the fast lane) is partly why she’s been able to perform nightly for 16 years in the hot kitchen of Jar, her Beverly Grove chophouse. Working at her usual spot alongside Armando Perez and Preech Narkthong, the petite 53-year-old mother of two has developed a series of moves that might be likened to the inside-the-paint game of an NBA center. There’s the hip-check of the pullout broiler where she chars Kansas City strips, the knee-tap of the lowboy fridge where she stores herbs, a quick pivot and long reach across the stove to grab the mussel appetizer—classic marinière with a splash of Sutter Home chardonnay and sliced ong choy greens.

Before launching Jar with decorated chef Mark Peel in 2001, Tracht operated Asian-fusion pioneer Jozu on Melrose. Back then she’d pay little heed to her own well-being. “I think I gave birth to my son on my day off,” she says with a laugh, recalling a time when she was a linchpin of Peel and Nancy Silverton’s team at the now-defunct Campanile. Taking care of herself, though, has not only contributed to her ability to keep cooking, it’s helped her become something increasingly rare in the restaurant business: a chef-owner who executes at the highest echelon on the line night after night.

Since opening, her brick-faced spot at Beverly and Harper (you remember it from the scene in La La Land when Emma Stone runs into the night to meet Ryan Gosling) has seen restaurants come and go; it’s become a beacon of stability, allowing Tracht to develop treasured relationships with staff (food runner José Luis Escobar is not the only one who’s been there from the start) and customers alike. “I have one regular who wants me to call him when another regular makes a reservation,” Tracht says. “That way they don’t miss each other by being here on different nights.”

Though her cooking has taken her from an apprenticeship at the Arizona Biltmore through the decisive early era of Cal-Italian cooking, it has settled into an updated, confident version of the American repertoire. Her pot roast has just enough sherry to soothe; shredded kimchi enlivens the brussels sprouts.

Tomorrow Tracht will take her two rescue mutts hiking at Runyon, but tonight…well, she’s a blur beside the swinging kitchen door, as usual. There’s enough time before starting the next order to say hello to table five.

RELATED: These L.A. Chefs Reveal Their Favorite Knives And Why They Love Them