Home Food What Makes the Bolognese Sauce at Rossoblu So Good? 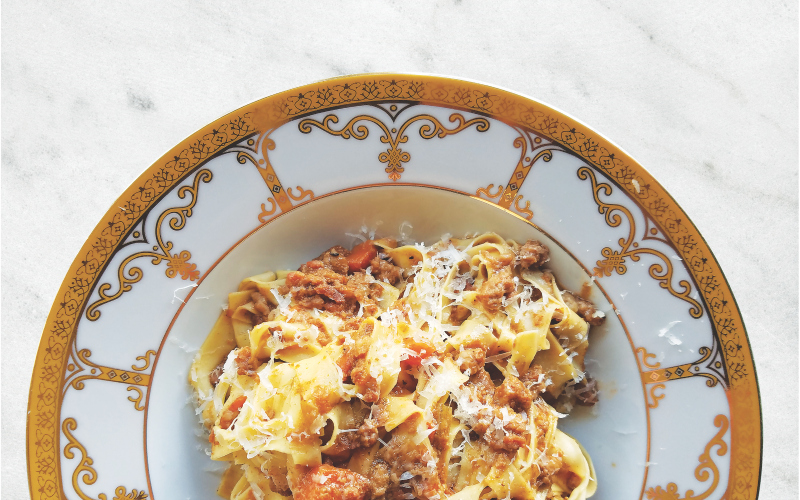 Turns out you may want to rethink your idea of Bolognese sauce. That’s what I find myself doing, anyway, soon after joining Steve Samson in the kitchen of downtown’s Rossoblu to make a batch. He’s gathered ingredients around a 30-gallon tilt skillet. Alongside a hundred pounds of ground pork shoulder and brisket, there are bay leaves, Parmesan rinds, and nutmeg seeds. But while I’ve always regarded Bolognese as a meaty red sauce not notable for anything beyond bubbling appetizingly in a lasagna, Samson’s got what looks like very little tomato paste to me. And where’s the garlic? Apparently not in Bologna, the northeastern Italian city whose hearty cuisine serves as a lodestar for the restaurant Samson and his wife, Dina, opened in June.“If I’m reading a recipe for Bolognese and I see garlic, I stop reading,” he says as he tosses diced onions, celery, and carrots into the heating olive oil and starts stirring with a long wood spoon.

Cheerful, loose limbed, and six feet tall, Samson devoted himself to Southern Italian food when he opened Sotto in a Pico Boulevard basement with Zach Pollack in 2011. But he was being truer to Italy’s heel than he was to himself: Samson’s American-born dad was studying medicine in Bologna when he met his future wife, a local girl, and Samson grew up in the Valley, enjoying the food of his mom’s hometown — at least what she could make from the ingredients she’d pick up at Domingo’s on Ventura Boulevard. During summer trips to Bologna, he learned to love tortellini and other local specialties in his grandparents’ modest second-floor apartment. While he’s set out to honor those memories, I doubt Nonna Olimpia ever said, “Nothing adds more umami than dry mushrooms,” as Samson does when he scatters chopped porcinis into the mix at Rossoblu.

The restaurant is located in City Market South, L.A.’s original wholesale produce center (it dates from 1909), where developers Mark Levy and Kevin Napoli strove to bring the same spirit that made their remodel of Central Avenue’s Dunbar Hotel feel both respectful and new. The bow-and-truss halls of the two-acre site are being converted into creative workspace. Plans for the complex include a branch of Charles Phan’s San Francisco restaurant Slanted Door and a cocktail bar from Steve Livigni and Pablo Moix. For now, other than a Cognoscenti Coffee, it’s just Samson and his quest. A flute of Lambrusco rosso and a few slices of pistachio-studded mortadella (the original bologna sausage) won’t fail to transport you from the Marwan Al-Sayed-designed dining room to Samson’s mom’s hometown. But in this homage — the restaurant’s name refers to Bologna’s soccer team’s colors — all depends on the sauce.

Making it induces a sheen of workout-worthy sweat on Samson as he stirs the meat, looking for hot spots and scraping off the fondo that caramelizes on the bottom of the skillet. At one stage he adds the tomato pulp and paste; later comes the white wine. Carefully building up flavors, he floats Parmesan rinds and grates the nutmeg seeds. Three hours into the process, he determines that the simmering mass has a few more to go. We do one of those TV switcheroos, and Samson heats already-made ragù in a sauté pan, adding freshly cooked tagliatelle and swirling it with a flick of the wrist. Then the Bolognese is before me, a skein of pasta barely glazed with pale sauce of remarkable subtlety. I’m not sure about the umami, but the bay leaf really comes through.