Home Film Here’s How the World of Blade Runner: 2049 Really Came to Life 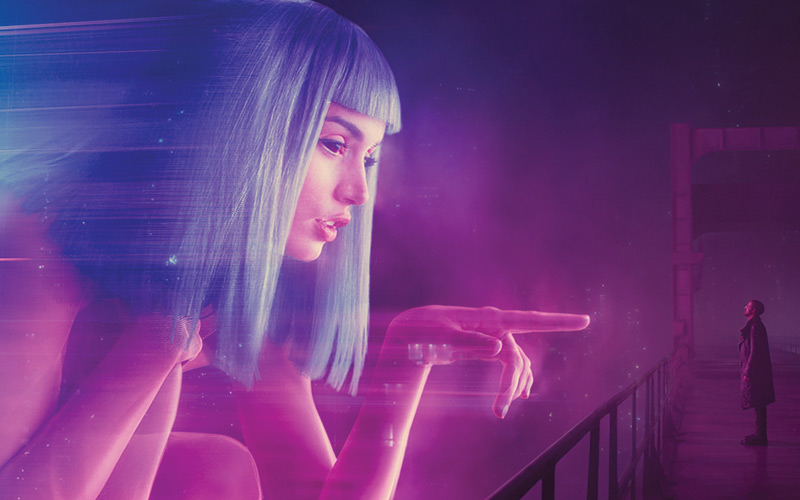 As told by Dennis Gassner to Marielle Wakim

I ALWAYS TRY to start with one word. I’ve done this with Joel and Ethan Coen, with Steven Spielberg, with Sam Mendes. When I started on Blade Runner 2049 with [director] Denis Villeneuve, I asked for a word. He paused for a second, and then he said, “Brutality.” And I said, “That’s our touchstone.”

Then I asked him if I could tell him a little story. He said sure—anytime you meet a new director, you have to go through this kind of dating period—and, of course, he was ready to listen. So I told him: In 1981, I was working at Zoetrope Studios as the assistant to Dean Tavoularis, who was Francis Coppola’s designer. He designed all the Godfather films and Apocalypse Now, which was the first film I worked on with him. We had done this film called One from the Heart about Las Vegas, and Francis got a call from this man who said he was interested in coming by and looking at the neon we had made for it. Dean turns to me and says, “Why don’t you take this,” and I said fine. So this guy arrived at the art department, and I said, “Hi, my name is Dennis Gassner,” and he said, “Hi, my name’s Ridley Scott.” We went down to the warehouse, and I opened the door, and there was two-and-a-half miles of neon. He almost passed out. As we were walking back to the art department, I said, “So what are you going to do with it?” And he told me about this film he was making called Blade Runner. I said, “Oh, that sounds cool”—and it was. Denis thought it was amazing that I had that connection even before the first film was made. So maybe it was predestined that this was going to happen.

Denis and I were reflecting on what we were about to do: make a film that was a continuation of the old film but that still stands on its own. The time period between the two is unprecedented. Between Denis, my old friend [cinematographer] Roger Deakins, and myself, we started down the road of finding the tone. And the tone is unique. I brought my 35 years; Roger, his 35 years; Denis, his gifted storytelling. And that was the nature of how we approached everything: in concert.

We wanted to use practical sets, which is the reason we filmed in Budapest—Ridley had done The Martian there, and he said they have good stage spaces. Because of those, one advantage that we had over the first film was the ability to gain architectural scale; we were able to open up our stages with set extensions and do this film in a bigger way than Ridley did. Our first design challenge was our main character’s vehicle, called a Spinner. He was in it more than any of the other sets. The graphic strength of the Spinner is the signature of the entire film. We spent a great deal of time dealing with the hardness and angles and functionality, its power sources—Is it fossil fuels? Is it fusion?—making it less digital and more analog. It’s like designing an Aston Martin.

But the reality of our world was also necessary: the brutality of the ocean pounding against Los Angeles, the rain and snow. Who knows what really happens in L.A. in 2049? It could be something that nobody would have imagined.

The future is relative. Ours is a continuation of what Ridley had set the rules up for. I don’t let people see my sets until I’m ready to show them—usually the day before we start shooting. And there’s always one word I want to hear when I present them. Denis would walk onto the set, and the word I wanted to hear is exactly the word he usually said, which is “Wow.”

Then he got to present the set to the actor. The actor walked in, and there was a sense of scale they had never imagined. And that’s empowering. The pressure on us is so great to go beyond where we’ve gone before. In this case we’re going beyond the original Blade Runner to some place that has a different quality. Similar—but different.