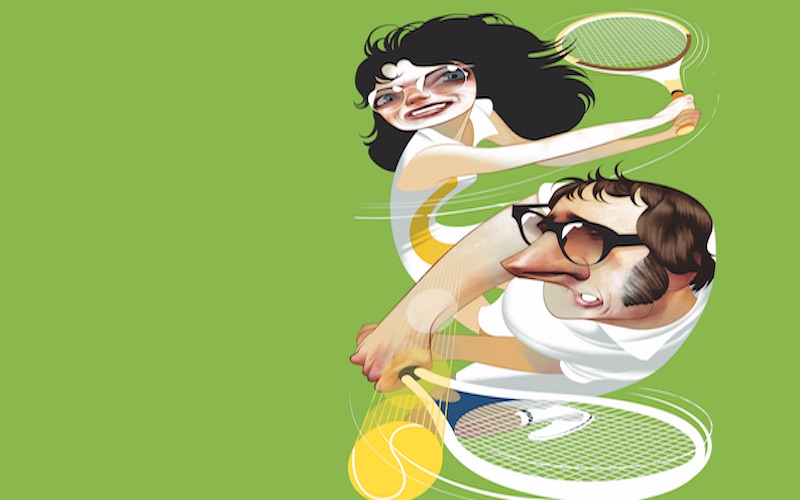 The tennis match called “The Battle of the Sexes”—between women’s champion Billie Jean King and former Wimbledon winner Bobby Riggs—was more than four decades ago, which means I listened to it from my mother’s womb. Well, OK, I had already been born, but I was really young. Pretty young. All right, I was practically a grown person; I was voting age, actually. This was after the discovery of fire and before the invention of the printing press. In any case I’m old enough to recall distinctly this hallowed milestone in gender equality and to have lived long enough that, in the current political epoch, everything that was old is new again, sexism included. As depicted in Battle of the Sexes, King was the perceived underdog, so the odd thing all those years ago is there wasn’t a doubt in my mind she would win. The greatest female player in the world against a washed-up guy in his fifties? What kind of match was that?

We should chalk up my foresight less to progressivism and more to the dumb naiveté of someone who knows little about sports in general and tennis in particular. Male sports fans were so stunned by King’s victory in straight sets that some questioned whether Riggs threw the game, even if $100,000 was riding on it, along with whatever shred of dignity he still had. After his defeat, Riggs spiraled into a deep months-long depression. What’s striking about Battle of the Sexes and the story it tells is how enormous the stakes were for a stunt so silly as to be irresistible to the 90 million people around the world who watched it on television. Riggs arrived court-side in a rickshaw escorted by barely clothed women while King was delivered like the Queen of the Nile on a platform hoisted by half-naked men. Riggs presented King with a ceremonial Sugar Daddy lollipop, and King reciprocated with an oinking piglet, a comment on male swinishness as represented by her opponent. It was all done with humor and even something resembling mutual affection, and since we know how the match ended, the movie’s real drama lies in the extraordinary pressure both players felt, especially King, who figured out she was playing for nothing less than history and the future of women’s tennis. Meanwhile, although the movie collapses these things rather succinctly, as movies do, she was coming to terms with personal epiphanies about her sexuality, finding herself a pioneer in ways she never wanted.

The 1973 King-Riggs match was pop culture’s climax to a feminist movement consumed by more substantive concerns about women’s roles at both home and work. This was a national conversation bookended by a Supreme Court decision the same year that determined abortion to be a constitutional right and, 13 years before, FDA approval of the birth control pill. Only the second feature by filmmakers Jonathan Dayton and Valerie Faris since their 2006 phenomenon, Little Miss Sunshine, and made with the same straightforward, unassuming affability, Battle of the Sexes might have been quaint just 18 months ago, but in the currently wracked and mean national milieu that leaves us barely remembering who we are as a country, the picture is a manifesto—not as radical as, say, Kathryn Bigelow’s Detroit this past summer, but bracing nonetheless. The most insurrectionist aspect of Battle of the Sexes is King’s personal journey as a woman for whom heterosexuality keeps lobbing fast serves she can’t return; married to a loving and supportive husband, she finds her heart, body, and psyche inexorably leading elsewhere. While Steve Carell is predictably perfect as Riggs—equal parts hucksterism and pathos, beset by a gambling addict’s debts and hatching media-savvy schemes that caught the world’s spotlight and cut him off from those who care about him—the movie belongs to Emma Stone as King in a performance that bids for a second consecutive Oscar following the one La La Land got her. Working inward from Billie Jean King’s outgoing personality and stooped, loping physicality, Stone encapsulates by resolute silences someone learning that she’s caught up in more than tennis, when what’s on the line isn’t a career or an identity but the hopes and opportunities of women watching this movie two generations later.

Among the premier actresses of her generation, Stone has ascended more stealthily than, say, powerhouse Jennifer Lawrence—in the business of taking Hollywood by storm before she was 20—or Michelle Williams, who had a series of conspicuously seismic breakthroughs once she transitioned from the small screen to the big. As a teen, Stone flew under the radar on sitcoms that led to B horror pictures before registering as the slut-who-really-isn’t in 2010’s Easy A, a modern retelling of The Scarlet Letter, although Nathaniel Hawthorne might not have used the word slut. Winning and irreverent in Crazy, Stupid, Love as the only woman on the planet immune (at first, anyway) to Ryan Gosling’s appeal, Stone was most famously a rebooted Spider-Man’s rebooted girlfriend until Birdman, a different sort of superhero movie, where she successfully achieved the hardest thing in movies for younger actors to achieve: a younger person’s attitude that doesn’t look and sound like an older screenwriter’s contrivance. As impressive as Michael Keaton and Ed Norton were, it may be Stone’s final wide-eyed gaze skyward in Birdman that stays with us, followed by the smile of a Mona Lisa less jaded by Rembrandt’s jokes or whatever painterly patter got the original Mona Lisa to smile that way. In yet another overfamiliar role in La La Land—the ingénue with a dream and the only other woman on the planet immune (at first, anyway) to Ryan Gosling’s appeal—Stone had not so much the force of revelation as the realization she was always better than we knew.

The times we live in recontextualize the culture we make, when the culture isn’t taking a back seat to the times altogether, when anything can wrest our attention from whatever fresh presidential outrage is being reported by The New York Times. That King, so many years after the fact, is still best known to the public at large for the Riggs match risks trivializing what she accomplished; Serena Williams, at once naked and pregnant on the cover of Vanity Fair and one of the most dominant champions ever of any gender, is part of King’s legacy. Two wordless scenes coming within seconds of each other near the end of Battle of the Sexes take command of our memory after the fi lm ends: the triumphant flyinging in the air of a tennis racket before a thunderstruck worldwide audience,and the subsequent overspill of emotion when King is alone in a locker room. Between the two a life has exposed itself to both the person living it and the rest of us enlightened by it.