Home Sports L.A. Loves Its Soccer, and We’re Finally Getting The Stadium to Match 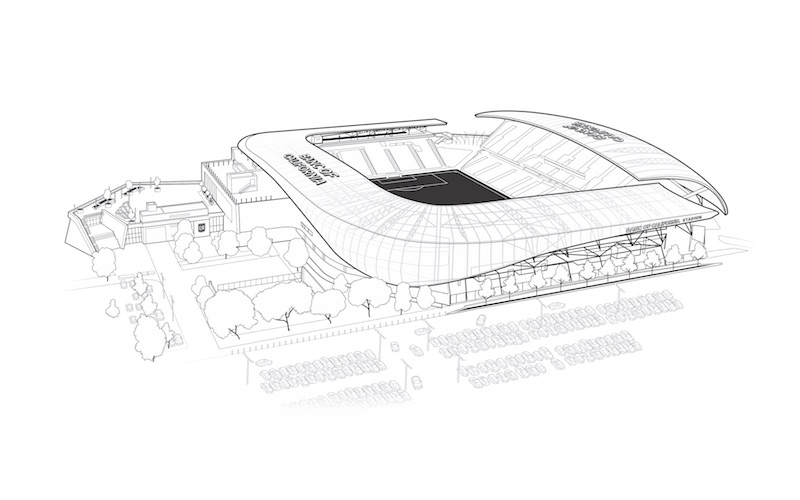 More than a century ago, baseball, rugby, and soccer players who faced off in Exposition Park along Figueroa Street would have to make do with little more than a grassy field. “The only thing lacking,” the Los Angeles Times reported in 1914, “were bleachers.” The Banc of California Stadium, set to open in the park in March, will offer a lot more than a place to sit. Designed by the mega architecture firm Gensler, the $350 million, 22,000-seat home to Major League Soccer’s newest team, the Los Angeles Football Club, marks L.A.’s first open-air arena since Dodger Stadium and its first soccer-specific stadium (the Galaxy’s home turf, StubHub Center in nearby Carson, isn’t just for soccer). It’s also got suitably starry backing, with owners who include Magic Johnson, Will Ferrell, producer Peter Guber, soccer great Mia Hamm, self-help guru Tony Robbins, and former Dodger Nomar Garciaparra.

A post shared by Banc of California Stadium (@bancofcaliforniastadium) on Jun 21, 2017 at 1:38pm PDT

“We are designing this project with NFL-type amenities,” says design director Jonathan Emmett. That means private suites, restaurants, shops, and a rooftop bar. “The front- row seats are only 12 feet away from the action,” he adds. “It’s a very intense and intimate atmosphere.”

But the stadium, which replaces the Los Angeles Memorial Sports Arena (onetime home of the Lakers, Clippers, and Kings), represents only a portion of the park’s transformation. Along with the arrival of the Expo Line, there was the revamping of the Natural History Museum, California Science Center, and California African American Museum, with the Coliseum slated for a $270 million upgrade. And, of course, there’s the forthcoming $1 billion Lucas Museum of Narrative Art. Says Emmett: “The renaissance of downtown really led to this.”

A post shared by Banc of California Stadium (@bancofcaliforniastadium) on May 30, 2017 at 10:09am PDT