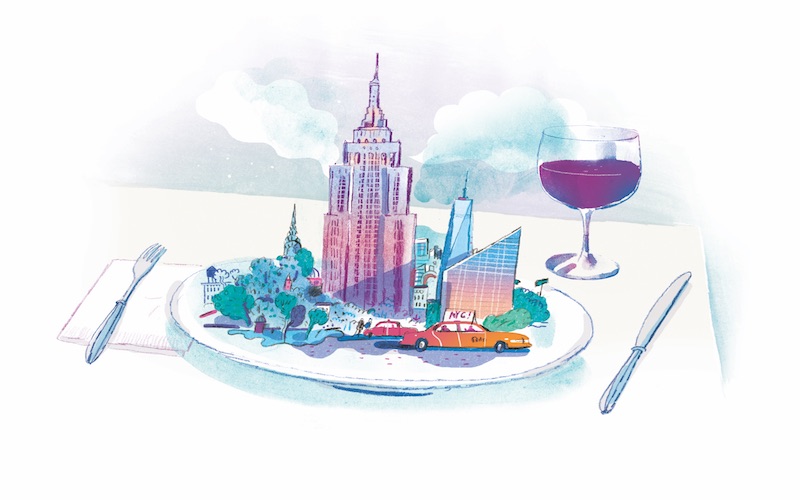 Some of my most cherished restaurants, the ones I still haunt when I return to New York, are opening outposts in Los Angeles: Jean-Georges, whose flavors are so distilled, it justifies entering Trump Tower; the NoMad, where I feel I’m cheating them by paying only $89 for their chicken; Dominique Ansel, whose famed cronut I shun for his perfect kouign-amann; the Mario Batali co-owned Eataly emporium, where I’ve shared a midday grande piatto misto di salumi e formaggi with no one other than a glass of Gavi di Gavi; and the Spotted Pig, where my only bad experience was waiting two hours for my meal because Jay Z decided to have his birthday there. (There are 99 reasons to like the Spotted Pig, but Jay Z is not one.) We’re also importing Cosme, with its $89 duck carnitas that I hear are as good as chicken.

While the food press is beside itself with anticipation, I must pause to ask: Have you been to Tao yet? Ever been to Rao’s? Did you make it to Scarpetta before it closed? Do you long to one day stroll down Abbot Kinney and into the 21 Club?

Not I. Because when I eat in a city, I want to experience the terroir. In Kyoto I crave precision; in Barcelona I crave invention; in Indianapolis I crave being anywhere else. Why anybody in Tokyo would go to its Grand Central Oyster Bar outpost to mimic the experience of quickly slurping bluepoints before running to make the train to Bronxville is one of a million things I don’t understand about that city.

By simply mimeographing their Manhattan restaurants, these New York chefs mistake us for Vegas, which is Epcot for Americans who are not interested in other countries.

New Yorkers like the Kismet chefs are welcome to come here and import farm-to-table cooking to a state that has farms. They understand that we Angelenos have our own style of dining, which is to act so casual that we prefer to eat every meal as if it were cereal, soup, or salad: out of a bowl.

So while I may eventually drive down Highland to get a whiff of those gorgeous pillows of gnudi from the Spotted Pig and be drawn downtown to the NoMad for that $89 chicken, I am in no rush to do so. I’m sure I’ll be back East soon enough to properly appreciate them there.

A previous version of this story incorrectly implied that trains to Ronkonkoma, Long Island depart from Grand Central Station. We apologize for the misdirection.

The Oscar Statue Gets a Makeover

Scene It Before: Location Forensics