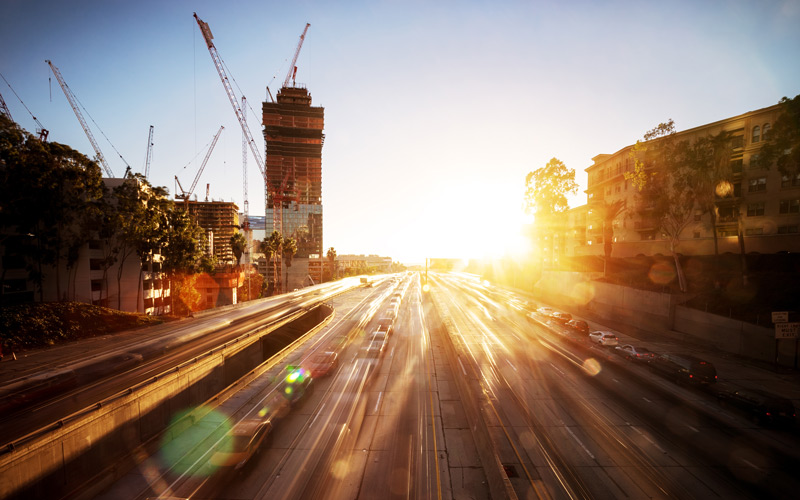 At 470 square miles, the City of Los Angeles is big enough to fit five Seattles within its borders. Tasked with helping to lend some shape and order to that vast tract of land as it grows ever more crowded is the planning department. Neighborhood density, transportation corridors, streetscapes, building height—it has a say in all of that, and at the top of its organizational tree is Vince Bertoni. A veteran of several planning departments in the region, Bertoni was appointed to the post last year. “L.A. is fundamentally rethinking what kind of city it’s going to be,” he says. “I find that amazingly exciting and challenging.” Naturally, a lot of the rethinking revolves around transportation. Below he lays out some of the changes he sees coming our way.

“If you look five, ten years out, you’re going to be seeing more development throughout Los Angeles near our transit stations, our rail lines as the Metropolitan Transportation Authority expands the rail network as a result of Measure M being passed last year. Phil Washington, the CEO of Metro, as well as Therese McMillan, who is the head of planning, see themselves as not just planning a rail network; they see themselves as planning communities.”

2. Driverless cars are already changing the way we build

“In anticipation of the day when automated vehicles come and there’s less individual car ownership, we’re requiring that if a developer builds parking aboveground downtown, they make it so there is the ability to convert that space to residential or office or some other kind of use. So rather than continuous sloping ramps, the space looks like regular building stories that can be converted into floor space.”

3. Driverless cars will be reshaping our streets, too

“As automated vehicles become more common, we’ll get this opportunity to rethink the fundamental geometry of the street and think of it as a comprehensive habitat, if you will, that goes from the wall of the building on one side of the street to the wall of the building on the other side of the street and that doesn’t just revolve around the automobile. We’re looking at what it’s like to walk, bicycle, even skateboard down these streets and all the other ways we’ll get around. We’re going to be putting in wider sidewalks, trees, bicycle lanes that people feel protected in. We are looking at these corridors in a very different way than we have in the past.”

4. Why this isn’t a Manhattan project

“They don’t have single-family detached homes anymore in New York. We still do. A great challenge is going to be how to maintain the integrity of residential neighborhoods that largely consist of single-family detached homes and still allow for additional density in certain places. We’ve got to be really thoughtful about how we do it—around areas where we have really good transit connections—and make sure we have the right kind of transitions for that.”

“If you think about displacement, it’s occurring in areas that have no new development happening at all. This is something that impacts lots of parts of the city. We have to be looking at how we increase our housing supply to truly match the needs of the people in the city so there’s a better balance between what people are earning and what their housing costs.”