Home Uncategorized Where the Sidewalk Ends 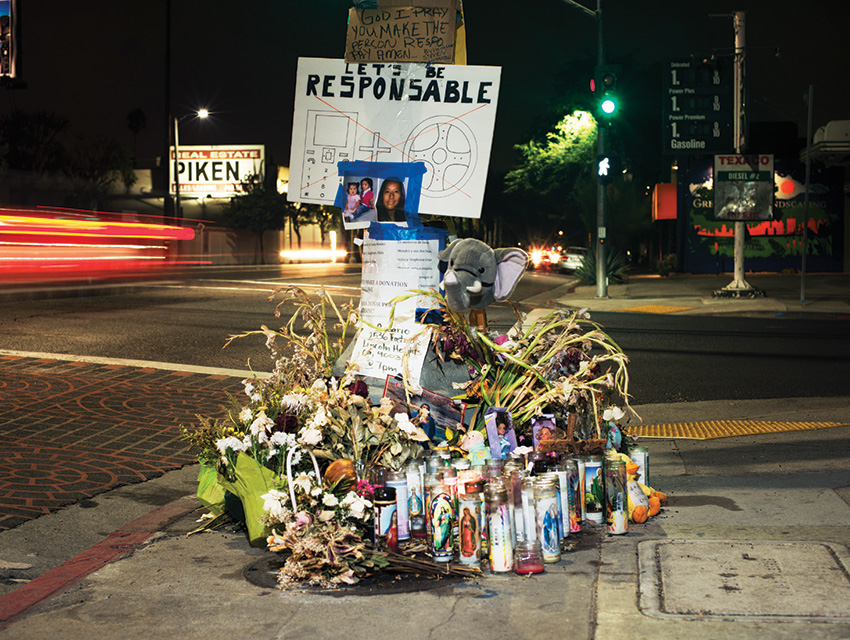 When we see a shrine, we’re usually on the move. In that, we have something in common with the individuals these pop-up memorials are meant to honor. Those people, too, were on their way somewhere when they reached the ultimate end of the road. And then, suddenly, nothing.

Most of us don’t know the men, women, and children whose points of departure are marked with bouquets and candles and teddy bears. But we feel the loss. Maybe we’ve heard about the accident on the news—the celebrating twentysomethings who drank too much before they got behind the wheel, the mother and her two young daughters who had the bad luck to be in their minivan when a senior citizen with a suspended license lost control and veered into their lane. To read about these tragedies is to realize it could have been you. Which is probably why once a shrine goes up, it can grow quickly with offerings from strangers. Maybe, we think, if we take a moment now to mark the fallen, we’ll be better able to take our foot off the pedal later, to proceed with more care. We point out these shrines to our teenagers as cautionary tales. No texting, we say, barely able to fathom the irreparable loss we are trying to guard against.

No one wants to be the one who—out of grief or anger or a need for closure—assembles the ordinary items that make for such extraordinary public gestures. But when we see a shrine, for a moment we understand the person who built it. Because a shrine is more than a mock headstone. It is a reminder that life can be too short, horrible things can happen to anybody, and—and here’s the important part—when you love someone, sometimes you have to say it out loud to anyone who will slow down long enough to listen. RIP: Luke Akao, 30
Date: May 20, 2012
What Happened: Akao’s motorcycle struck a pole at the Metro bus stop on Beverly Boulevard, on the southwest corner of Rossmore Avenue, Hancock Park RIP: Saida Juana Mendez-Bernardino, 27, and her daughters, Hilda and Stephanie Cruz, ages 6 and 4
Date: August 29, 2012
What Happened: Mendez-Bernardino’s minivan collided with a car that swerved into her lane on Highland Avenue at Willoughby, Hollywood