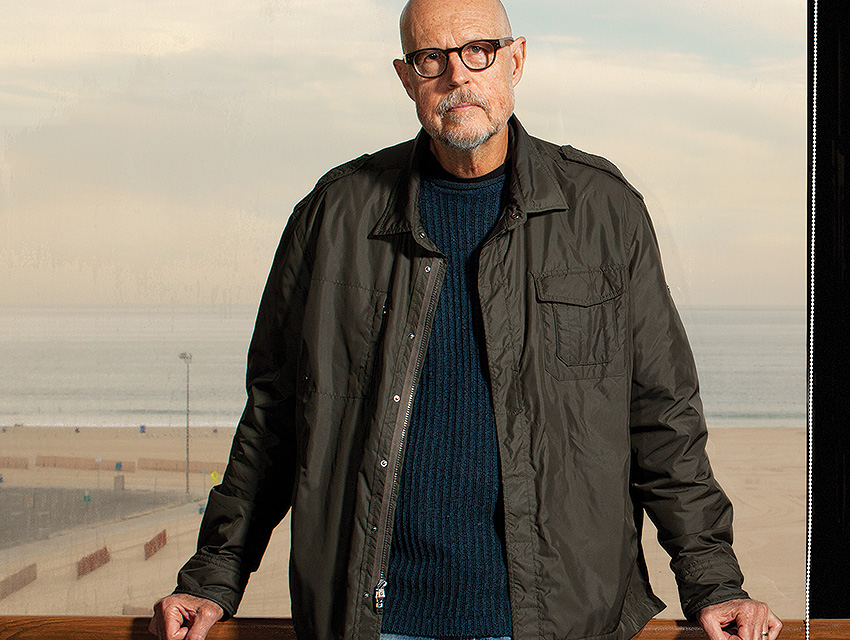 One day in 2004, while heading home from a drugstore ten minutes from his house, Kem Nunn got into his car, put the key in the ignition, and turned it. Next thing he knew, he was in an ambulance, his car totaled. “You can be in the middle of something so ordinary,” he says, unable to report much about the accident, “and then everything changes.” How much time had he lost? “Maybe this isn’t real,” he thought, lying on the stretcher. “Maybe I’ve slipped through the looking glass.” The diagnosis? Amnesia, which Nunn remembers as “profound dislocation.”

The unraveling of reality became the inspiration for Nunn’s new novel, Chance, a crime thriller out this month from Scribner, his first book since the crash. “Life itself is a literary exercise,” Nunn says of the incident, all faculties intact (or so it seems), safely ensconced in what looks like a favorite chair in a cozy un-Kem Nunnish neighborhood in Van Nuys. Since his breakout 1984 novel, Tapping the Source, which was set on the seedy side of Huntington Beach and featured a young Ike Tucker in search of his missing sister, readers tend to picture Nunn outdoors, prowling the unglamorous side of the Southern California surfing world. Or he’s in the dark, fungal, drug-producing woods of Northern California, which he explored in his other surf noir classic, The Dogs of Winter. Not in this bungalow suburb with a plate-glass view of the street.

It turns out that Nunn lives in two places. The novelist-surfer keeps a home in San Clemente. The TV writer-producer, who’s working on the FX series Sons of Anarchy, lives closer to the show’s North Hollywood set. In San Clemente the sun and sea make it harder to be uncontrollably paranoid. At midday in Van Nuys, however, the broad, empty streets by Nunn’s house seem about to erupt into the adrenalized violence that defines his writing of late. Don’t be fooled by the pretty fences, the cacti, palms, and sycamores, the sweet little houses with their curtains tightly pulled against the glare, your instinct whispers. A single car grinds its way around the block, circles back, then goes the other way. Something’s not right.

Nunn, now 65, is in excellent shape from years of surfing. He’s well over six feet tall and tends to wear loose, pale clothes. His demeanor is one part deadpan, two parts Zen. He’s calm and confident, which, as we all know, often masks a confused and anxious interior life. You see it in neuropsychiatrist Eldon Chance, the main character of Nunn’s new book. Chance has lost hard-won control over his life when the novel opens. He’s divorced after 20 years—ex-wife Carla has the house, and Chance’s daughter, Nicole, is in her sullen teenage years. His work consists of filing reports on patients and serving as an expert witness in court. He’s just moved into an apartment that feels more than a bit empty. Nunn writes of Chance: “Well, he thought now, watching the golden light and late wind play havoc with the clouds above the rooftops, he had been the good son, at least to a point. Twenty-odd years in the practice of medicine and it had gotten him here, to something very much resembling the oft-cited life of quiet desperation, unfulfilled in his work, divorced and indebted, half in love with an impossible woman, a potentially malignant blip on another man’s radar.”

The woman is Jaclyn Blackstone, the abused wife of a creepy Oakland homicide detective. Blackstone comes to Chance with memory problems, psychiatric distress, and multiple personalities. Chance refers her to his friend and colleague Janice Silver. But after a beating from her husband puts Blackstone in the hospital, Chance dons the mantle of knight in shining armor to save her.

An overweight, street-fighting, Nietzsche-toting veteran who goes by the name of D becomes the doctor’s confidant, mentor, and hit man. His character is thoroughly drawn, strangely lovable, and completely unforgettable. D has no regard for the rules, and why should he? People like me, he tells Chance, only matter to politicians when they’re looking for cannon fodder or a vote. “Let a guy like D into your life,” Nunn says, “and all hell breaks loose.”

D shares more than a few traits with Nunn’s friend Tom, who earns a living training military personnel in the use of “edged weapons.” It was Tom who shared Nunn’s fascination with Nietzsche and the possibility that all of us walk around creating our own fragile narratives. “You go through the world taking what you need to become what you are—a little art, a little experience,” Nunn says. “Losing those moments after the accident convinced me of the frailty of the present.”

Kem Nunn spent much of his childhood in Pomona, where he lived until he was 21. He started surfing when he was nine, at Salt Creek in Orange County. His dad was an avid swimmer and body surfer, and even though they lived an hour away, father and son would make the trek to the coast frequently, sometimes camping out next to the beach.

As Nunn entered his teen years in the 1960s, getting back and forth to the surf was “an ongoing quest for cars reliable enough to take me and a handful of like-minded friends and enough gas money to keep us going,” he says. Pomona was also experiencing a massive economic shift. A large defense plant shut down. At the same time black families disenchanted with L.A. after the Watts riots were able to buy homes there cheaply, largely because of the plant closure. “The complexion of the place changed very quickly,” he says. “There was a fair amount of white flight, racial tensions in the schools. It was what you might call a turbulent time.”

Nunn’s parents were Jehovah’s Witnesses, which constituted a big part of his family life and the reason he pursued ministerial work upon graduating from high school. “It not only provided for a deferment from the draft, it felt like the right thing to do, given how I had been raised, the community I had grown up in−which, by the way, was a very caring community of people,” he says. “Eventually, however, I saw that I needed another path.”