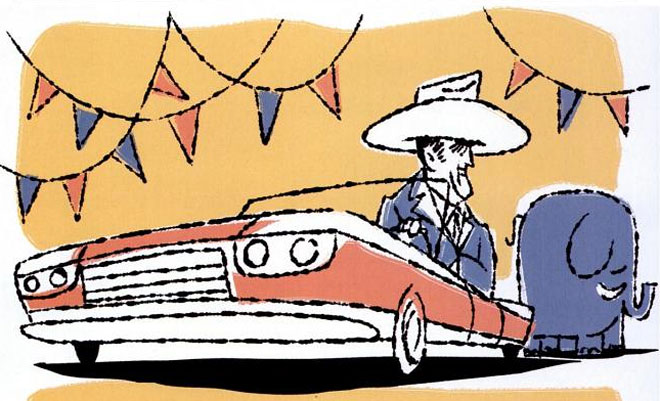 I’VE STOOD ON MY HEAD. I’ve said I’d eat a bug if customers could get a better deal on a car. I’ve never really had to eat one, but I’ve had people send me bugs. Sometimes they’d be chocolate covered.

I’m a competitor. If I’m playing poker for matches, I play really hard to get your matches. I’m not after the money I like to win. The car business is like a game of tennis. I mean, you have to slug it out.

I’ve never had a partner or an investor. I’ve had many, many dealerships and I’ve sold hundreds of thousands of cars and trucks, probably around half a million altogether. I’ve had dealerships from Houston to Seattle, but I’ve sold a lot of them off to grow almonds and raise cattle. Some people are born salespeople. Some are real, real good. And some are just fairly good. The most important thing I tell my salesmen is you have to listen to people. So many people talk so damn much that they don’t listen.

My business about tripled after I came up with those “My Dog Spot” commercials in the early ’70s. I’ve never actually had a dog named Spot. I’ve got a dog—she’s an Australian shepherd—and instead of calling her Kangaroo we call her ‘Roo. She’s 15 years old. She’s a really nice little dog. I’ve had her forever.

Here’s the way I came up with “Spot.” Ralph Williams was a high-powered auto dealer and a real fast-talking, hard-selling guy. He was a big name in Southern California. He had this all-night movie program on TV and he did these commercials with his dog—his dog’s name was Storm. He canceled the show and I picked up the sponsorship. I was going to go down and do commercials for my car lots. I had hosted this country music show, an hour show called Country Music Time on prime-time TV. I was emcee and we got great ratings. So I was very well known for country music—very well known. So the guys who ran the movie program, they knew me and they said, “Cal, you’ve got to get yourself a dog.” They were all kidding me. There was this old guy that’s been coming up to my country music show. He wanted to bring a gorilla in. He was a kind of old Okie redneck guy, a nice guy. I said; “No, no, no, I don’t need a gorilla, but thanks a lot anyway” I got to thinking, “I wonder if that guy’s still got that gorilla?” I called him up and I said, “Can you bring that gorilla down here?”

So he brings this gorilla down for the commercial, and I’m going to pretend it’s a dog, that I’m really a little stupid. And when this thing got on the set, goddamn, he was horrible—so we chained him to the bumper right near me and I started the commercial. “I’m Cal Worthington and I’ve been down to the pound and I found this little fella and he’s real sweet and he doesn’t eat much and he’s just full of love. He chases cars, he chases cats. I know he’s a dog.” I said, “Speak, Spot,” and he let out a roar. I wrapped it up, talking like a preacher. Let me tell you something. I can outsell that dealer out in the Valley. And I can out trade that dealer out in the Valley, and what’s more my dog can whip his dog.” I never mentioned his name, but everyone knew I was talking about Ralph Williams.

I used lots of other animals for Spot. I used an alligator. I used an iguana a lot. My favorite one was this big Bengal tiger. She weighed 500 pounds, and boy, she was dangerous, but she loved me and she’d spring on me and knock me down. I’d break my fall by hanging on to her, and we’d be wrestling and she’d be roaring and people would be screaming as if she was killing me. We was just having a good old time. I still show Spot a little bit from old clips, but TV has gotten so expensive. It’s a long time since I’ve done an ad with a live animal. I’m 82 now, but I still do 40 commercials a week for my lots in Carlsbad, Anchorage, and Long Beach.

I wrote my own jingle and recorded it. It’s got 12 to 13 verses. [Worthington starts singing to the tune of” If You’re Happy and You Know It.”] “If your axle is a-saggin’, go see Cal / Maybe need a station wagon, go see Cal / If your wife has started naggin’ / and your tailpipe is a-draggin’ / Go see Cal, go see Cal, go see Cal.” I was at a big meeting for Dodge dealers one time and this guy stood up and started just raising hell, kind of belligerent, and he said, “Cal, I want you to get that goddamn jingle off the air.” He was a Dodge dealer and I was a Dodge dealer, and I was just selling Dodges like crazy He said, “This is awful, my own kids are going around singing, ‘Go see Cal.'” Of course it got a big laugh.

I come from that same area in northeastern Oklahoma that Will Rogers and Gene Autry was from. People, not just in Los Angeles but all over the United States, they like plainspoken people. We were nine children—very, very poor. It was terrible. I quit school when I was 15. I got into the air force in World War II. I led the first daylight mission against Berlin. I won a lot of decorations and I dodged a lot of bullets and I got tremendous publicity.

After the war, I thought I could get a job as an airline pilot, but you had to have a college education. I was a crack—absolutely crack—pilot, but that didn’t help so I wound up buying a car, an old Hudson, and fixed it up, and all of a sudden I’m just buying cars and selling them like crazy. I made some pretty good money at my lot in Texas—not big, big money, but I did okay for myself. I had a chance to buy some war surplus, some welding electrodes, over in Hawaii. I put a bid on it and damned if I didn’t get it.

I found I could ship them to the West Coast a little cheaper than to Texas, so I said, “I’ll just close down this used car operation and go out and get those things and get rid of them, and then I’ll come back to Texas and maybe get a larger lot.” Well, they had a longshoremen’s strike and my stuff was stuck on the boat for three months, and by the time I had got it off it had deteriorated from the moisture. It took me three years to get rid of it. I had an awful time.

Southern California, when I came out here in the late ’40s, it was like a cross section of the U.S. We had Okies, we had Texans, we had quite a few Latinos—not as much as we have now but quite a few. While I was here, I made friends with a banker, and he called me one time about a Hudson dealership in L.A. and I bought it.

I’ve spoken at high schools quite a bit, and colleges and civic outfits. Some guys in the audience, they always say; “Boy; you went a long way without an education.” And I say, “Yeah, and I could have done a hell of a lot better if I’d had a formal education, because I made some horrible mistakes.” I was offered the Volkswagen distributorship many years ago when the car was just coming into California, and I looked at that thing. It had that little old four-cylinder engine stuck in the back—it looked ridiculous to me and I said, “No one will buy that thing.” Of course it became a sensational car.

Looking at the business today, I like the hybrid cars. They could have done this years ago. I figured this out years and years and years ago: “Well, why don’t we have a little gasoline engine that runs at constant speed? We could time it and tune it. Adjust the valves so it doesn’t pollute at all. Let it turn the generator and have it run on electricity.”

Now, I like an SUV, but I live in the country, out on my ranch, and I pull big trailers with it. But if you live in town, who needs a great ol’ big SUV? Who needs that thing? They’re hard to park. They use a lot of gas. They don’t ride that well. And they’re much more likely to tip over. Why are they so popular? It’s a fashion statement and it’s a macho thing. It’s the same reason someone puts a tattoo on their rear end, because everyone else does it. It doesn’t serve any purpose, but they want to do it because they want to be in and not out.