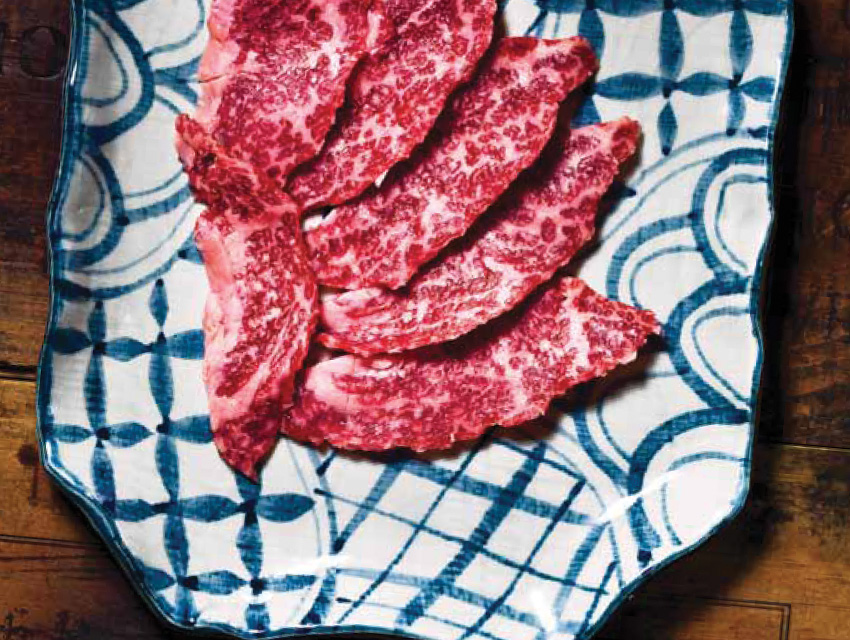 In the winter of 1999, Kaz Oyama was driving along Pico Boulevard in Cheviot Hills when he noticed a man—“Old, Jewish guy,” he says—putting up a FOR LEASE sign in the window of a taco and burger joint. Something made Oyama do a U-turn and park, though he admits he was in no position to be shopping for real estate at the time. “I didn’t have any money, but it was my last chance,” he says. “There was no other way out for me.”

A few years earlier Oyama, a Japanese-born chef, had lost roughly his entire shirt on a restaurant venture gone bad. He was working at Hide Sushi on Sawtelle Boulevard when a customer persuaded him to open a place of his own.

“I was stupid,” he says, shaking his head. “I believed him. I believed that lawyer. He ran away with all my assets.”

The restaurant on Pico was not much to look at. It was narrow and dark, smelled of ancient grease, and had zero atmosphere, but Oyama wanted in. He had a wife and son to feed and “my big ego, too,” he says with a laugh. Oyama pooled resources from friends and signed the lease. “I had no money left to decorate it, but it didn’t need to be fancy,” he says. “Clean. Nice table. Not too comfortable. Not too uncomfortable.”

Oyama did manage to put up a sign outside—bright yellow with green palm trees flanking the words THE TERIYAKI HOUSE PICO. Because that’s what was on the menu back then: teriyaki beef, teriyaki chicken, vegetables. It was the sort of cheap lunch spot you might find in central Osaka or Tokyo. Except this wasn’t Osaka or Tokyo. It wasn’t even Sawtelle.

“Very quickly,” Oyama says, “we realized there were no customers. None. Next door, guys were laughing at me every day: ‘Why’d you start this kind of business?’ ”

A month and a half in, the Teriyaki House Pico shut its doors.

Today at 55, Oyama still has the flowing jet black mane (it’s a mullet, honestly) and trim physique of a much younger man, not to mention the energy. He speaks in uninterruptible sentences and laughs loudly at his own jokes when he isn’t misting up over how quickly life is passing. “My son is 29!” he says, his eyes growing wide. Kenichi Oyama is his father’s kitchen assistant. “In Japanese we say ‘ichi-go ichi-e.’ One chance, one meeting. We are here for this time only.” His mood brightens suddenly. “So we better be nice to each other!”

A reservation at Oyama’s restaurant on Pico is now among the toughest to land in Los Angeles (see “Anatomy of a Totoraku Reservation”). Not that the space looks much different from the way it did originally—before Oyama changed course and reinvented everything but the decor in the weeks after the Teriyaki House Pico closed. The dining area remains so tight that when a customer walks to the restroom, Oyama’s wife, Shizumi, who doubles as maître d’ and waiter, must do an airplane-aisle side turn to let the person pass. Two fluorescent tubes hang from the ceiling on grotty chains, though one light is eternally burned out. The art on the walls brings to mind junior college: framed posters of James Dean, Marilyn Monroe, Bob Marley. The only nod to fine dining is the lineup of impressive wine empties (1992 Colgin, 1961 Mouton Rothschild, 1945 Petrus) on a ledge that runs the length of the place.

Out front the Teriyaki House Pico sign endures as both artifact and decoy. Toto-raku, as Oyama renamed the restaurant (the word means “lucky dad” in archaic Japanese) now serves a kaiseki, or multiple-course meal, of beef—a third of it raw, the rest cooked yakiniku style, a conventionally Korean way of grilling meat at the table that’s popular in Japan. The set menu begins at $140 per person, but there are no actual menus or prices to be seen. The obscurity is all part of the allure. In an L.A. dining world where kitchens are judged by the number of Top Chef stars on the line plating foraged petrified yams, Totoraku does everything it can to avoid attention. The restaurant is not on Twitter, Facebook, or Open Table, and Oyama does not have a Web site or accept e-mail requests or walk-ins (a sunny but firm “So sorry! Fully booked tonight” is what you’ll get if you are not expected, even if nobody’s in the house). For all these reasons, Totoraku—or “Toto” to invited regulars—is known in certain circles around town as “the secret beef restaurant,” although it’s hardly a secret anymore.

The only way to eat at Totoraku is to call the handwritten cell number on Oyama’s flimsy business card. But the only way to get Oyama’s card is to eat at Totoraku. This Zen-koan reservations policy has thwarted neither patrons—the restaurant is busy every night—nor passionate Yelp reviewers, most of whom give five stars. Officially Totoraku is unlicensed to serve alcohol, but bottle-toting regulars make it one of the top wine scenes in L.A., partly because there’s no corkage fee. Customers range from the merely loyal, like chefs Ludo Lefeb-vre, José Andrés, Nobu Matsuhisa, and actor Benicio Del Toro, to the supremely obsessive. When Ichiro Suzuki, the Japanese-born New York Yankee outfielder, was visiting Los Angeles some years ago, he ate at Totoraku five nights in one week, Oyama says.

“Every element conspires against Toto’s success,” says Andy Gavin, a video game entrepreneur and food blogger who has been eating there for more than a decade. “The place looks like hell, the menu is always exactly the same, they’re understaffed, they don’t want new customers, they don’t do social media. And yet, hands down, it’s the best beef place of its kind in L.A., and there’s no place more fun or impressive to take your friends who’ve seen and done and eaten it all.”