Home Uncategorized The USC Song Girl and The Sea 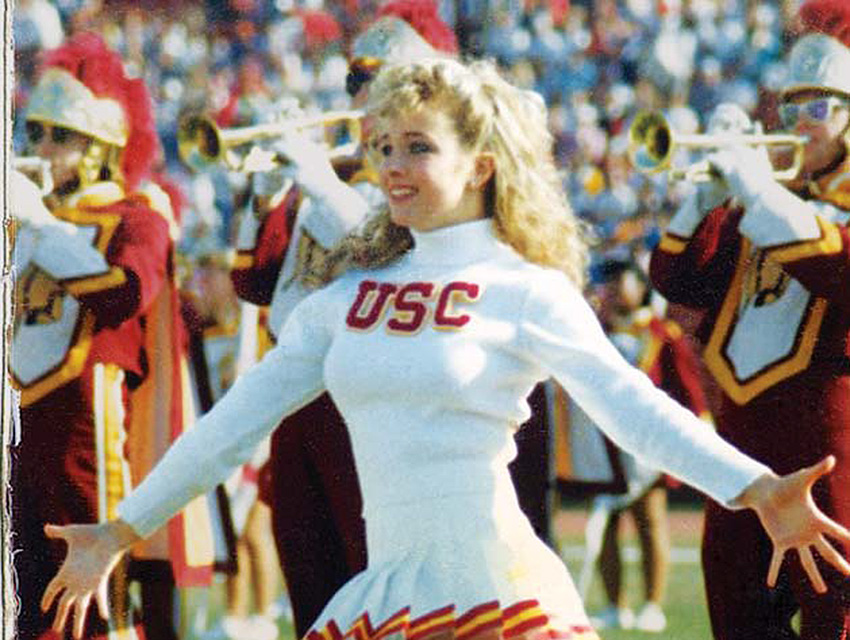 Coast Guard flight mechanic Neil Moulder leaned out of a swaying Jayhawk helicopter and into the full force of Hurricane Sandy, pulling with all his weight on a thick steel cable. Forty feet below, a rescue cage and the shivering survivor inside—nearly 300 pounds total—were being tossed like a paper kite in the 60-knot winds. The tall ship Bounty, attempting to outrun the massive storm, was sinking in the Atlantic in the predawn hours of October 29. Now Moulder fought to keep the cable steady or risk stranding the survivors, who were floating in flimsy lifeboats in 30-foot seas. “As soon as we’d pick up the basket, the winds would throw it under the helicopter and I’d have to muscle it back over,” he says.

As each survivor spilled out of the wire enclosure, Moulder would roll the body, helpless in an oversize orange survival suit, toward any open space on the Jayhawk’s floor. With every new arrival, the group cheered. Moulder’s Jayhawk saved nine, a second helicopter working nearby, five, before dwindling fuel supplies sent them home. A third helicopter arrived to continue the rescue, searching for the suits’ telltale lights. By the time the aircraft landed on fumes at their Elizabeth City, North Carolina, base just past 10 a.m., someone had posted a celebratory message on the Bounty’s Facebook page: “THE CREW IS SAFE…” But like so much of the news coursing through the Web, the announcement was premature.

The captain had gone down with the ship. So had the USC Song Girl.

Claudene Christian had a waterfall of blond hair, was voluptuous without being vampish, and walked the University of Southern California campus on perfect legs. She also wore with confidence the halo of being among the school’s most iconic group of women. If you’ve seen the first ten seconds of any televised USC football game, you’ve watched the Song Girls. The commercials end. The network logo tumbles onscreen over a wide shot of a stadium, usually viewed from a blimp. Theme music erupts as a voice with game show-host urgency announces, “You’re looking liiive at Los Angeles, California…” And then, before you’ve glimpsed so much as a red helmet, a pretty girl fills the screen, her grin wide and her white turtleneck sweater both timelessly modest and alluringly tight, the USC letters emblazoned across her chest. She won’t shout or clap or point or give any hint that she knows she’s on TV. She will most certainly not look at the camera. There is nothing happenstance about this moment, nothing unplanned when she stands at military attention on a sideline or twirls in perfect sync with her teammates. Her facial expression, her posture, her entire demeanor are carefully calibrated to match every Song Girl who’s gone before her in the squad’s 44-year history. The process begins with a tough selection that whittles down a hundred or more hopefuls to a number that is about a dozen today but was closer to six when Claudene tried out as a freshman in 1988.

A five-foot-one former gymnast from Anchorage, Alaska, Claudene had been a long shot to make the squad. “In those days Song Girls had a reputation for being tall girls,” says Diana DeBruhl Moody, the captain of the 1989 squad. “Like five-foot-seven or even taller. Claudene was so tiny.” She was also going up for the first time against girls who’d been involved in the world of competitive cheerleading. “Claudene called me in tears,” says childhood friend Wendy Sellens, who was then at Kansas State University. “When she went back for the second round, she almost walked out. She said, ‘Wendy, every girl there had a personal coach.’ It was just her.” Still, as the tryouts continued, squad director Lori Nelson found herself sold on Claudene’s dynamic spirit. “Claudene had that personality that leaped out at you,” Nelson says. “She had so much energy.” That year Nelson would pick an additional barely five-foot contender, Randi Shea. In official photographs Randi and Claudene inevitably stand at the ends, flanking willowy teammates each a head taller. Watching the women practice, USC’s longtime band director Arthur Bartner dubbed Randi and Claudene “the Bookends.” The name stuck.

For the next two years Claudene sat at the top of USC’s food chain: popular with men, envied by women, fawned over by alumni. She had football player boyfriends and a red convertible BMW covered in USC stickers. But looking like a rich kid is not the same as being one. There was no compensation for Song Girl duties. The BMW was possible only because of an unusual entitlement. Like all Alaska residents, Claudene received a dividend check every year from the state’s oil revenues. The money was funneled into a college fund, which paid for the well-used car. “What a lemon it was,” says her mother, Dina, laughing. More pressing was the price tag for a USC education. In the late 1980s, tuition was close to $20,000 per year. “It was hard,” says Dina. “We sold a few pieces of land, but we made it work.”

Southern California was everything Claudene wanted: a land of endless sunshine. As a baby, she had been terrified of the dark. “She’d sit there in the crib and curl her hair real fast,” says Dina. “We always thought she would do it to keep herself awake.” Alaska is a hard place to grow up if your nemesis is night. In winter a timid sun rises at 10 a.m. and sinks below the horizon by 4. If those few precious hours of dusky light are spent inside the cinder-block walls of West Anchorage High School, you might start to believe that you’re sleeping your life away. But even in grade school an inner force drove Claudene. “We kept her in every activity she wanted to try—dance and singing and just about every sport there was,” says Dina. She won gymnastics championships, was voted Miss Alaska National Teen Ager, opened for the Osmond family, and was elected class president. She made strong impressions on people, including a chemistry teacher who told Dina that Claudene had “an aura. We looked at him like he was nuts, but he said, ‘I know if Claudene is in the room before I walk in.’ Everybody was in such a better mood when Claudene was there.”