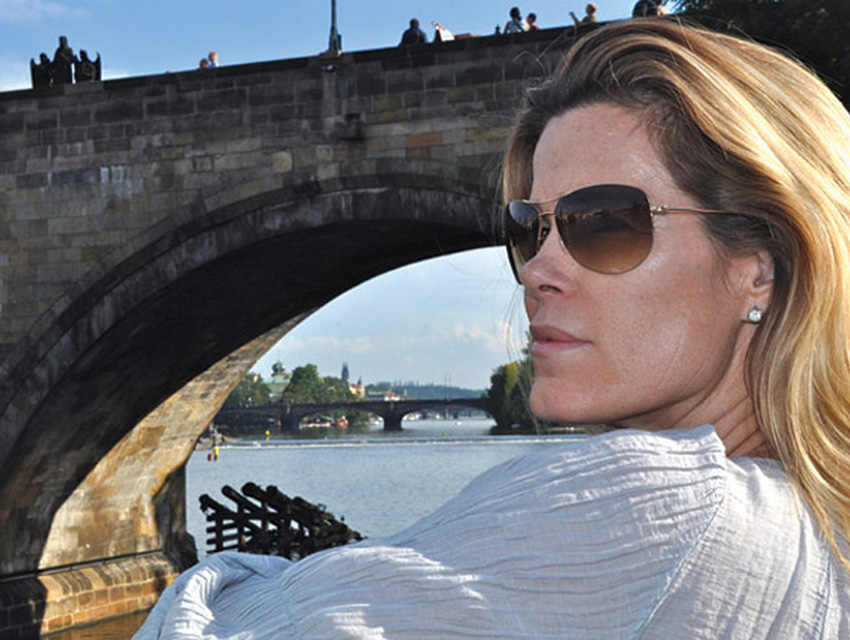 One minute you’re an anchorwoman in L.A. The next you’re unemployed. What to do? Why not rent out your house, pack up your bags (and your family), and travel  Ruta 40  in Argentina?  Or sell your cars to pay your way to  Machu  Picchu? Or ditch your Botox  injections  hippos in Africa? Whether you’re going camping in Montana, freezing your ass off  in Iceland, or hanging on tight while  leaping off a cliff in Croatia, you may well discover that the best part of you is present no matter how far you go.

I was fired from my job as the morning anchor at CBS2 on a “March Madness” Friday, immediately after a newscast featuring a story on how the number of vasectomies always increases before college basketball’s biggest weekend. After almost eight years of reporting on wildfires, traffic, and celebrity misbehavior, I was summoned by the news director to a conference room. He was, he said, “restructuring.”

“What does that mean?” I asked, though I suspected I wasn’t getting a promotion.

“It means today is your last day,” he answered, clutching a clipboard to his chest like a cartoon squirrel with a precious cache of nuts. My perfectly tweezed eyebrows tried to knit together in alarm, but the Botox that helped me stay competitive with the station’s younger talent kept my face unruffled.

Instead I flashed a bright morning anchor smile and stood up, towering over him in Prada heels, and wished him good luck, adding—in my mind only, I think, though I can’t be certain—“you little asshole.” Then a human resources manager named Alice, who happened to live down the street from me, escorted me out of the building. I’m not sure who was more mortified when she asked for my security card.

Being suddenly anchorless—cut adrift in a city that puts a high premium on success—I tried to get angry. I’d graduated from UCLA and worked hard for my master’s degree in broadcast journalism. I’d played by the rules, painting surfer-girl highlights into my dirty blond hair and making sure my butt never exceeded a size 2. I’d climbed the ladder of local news, turning tragedy into a storytelling art form as a field reporter. And when I finally earned a full-time seat at the anchor desk, I’d begun setting my alarm clock for 3 a.m. and popping Ambiens like Tic Tacs at night.

In the midst of this career frenzy, my husband, Ethan, and I had tried to start a family. Seven in vitro fertilizations and three miscarriages later—plus countless dashes from the news set to barf in the bathroom—my son Griffin was born premature and colicky. I often sat up holding him at night, afraid he would die if I didn’t.

With blow-dried hair and airbrushed makeup, I walked through life like a pretty, pampered zombie, missing Griffin’s first steps and first day of school. When Adrian, my second son, was born, carried by a surrogate mother because my body couldn’t handle this basic female function again, I was back at the anchor desk in less than three weeks. But instead of feeling indignant that CBS had not respected these sacrifices, I felt ashamed that I’d never had the courage to quit. Driving off the CBS lot for the last time, I put my head down and ignored the security guard’s friendly wave.

My family, however, was ecstatic when I joined the ranks of the unemployed. “Now maybe you won’t put your car keys in the fridge,” Ethan said. “Now maybe I get my wife back.” He didn’t mention that now neither of us had a job. My husband, a house flipper by trade, had been Mr. Mom ever since the real estate bubble burst in 2008.

“Does this mean you won’t leave in the darktime anymore?” Griffin asked. I’d been out the door before he woke up for all of his four-and-a-half years. “Yes, baby,” I replied, eyes stinging from the first treacherous tears as Adrian, who had just turned two, toddled over.

But ice cream wasn’t going to soothe the panic that was starting to bang around in my chest like a kid with a couple of pots and pans. I’d been gainfully employed since I began selling Burrito Supremes at Taco Bell at age 15, and the workaholic inside me wanted answers.

The Pelican Epiphany
As news of my firing spread via the L.A. Times and Variety, my agent called with a job offer from KNBC—a shot at redemption that tempted me to claw my way back up. Being the daughter of a Superwoman—a 1970s mother of three who wore groovy polyester pantsuits to her teaching job while earning her Ph.D.—that fight was in my blood. In 3rd grade I beat Robbie Baxter (a boy!) in the national Physical Fitness Test. In 8th grade I aced wood shop and shunned home ec. In 12th grade I set my goals (“Earn $100,000 before I’m 30!”) the way other girls listed the qualities they wanted in a husband (“Nice! Fun! Cute!”). But here I was, a 45-year-old mom suffering from mild career-related battle fatigue and moderate perimenopause. There was little fight left in me.

In an ironic coincidence, the day after I was fired we left for Mexico on a planned vacation. Sleeping late and relaxing should have been the first priorities, but every margarita made me feel more like a loser. Vacations, I discovered, were more fun when I had a job.

One morning misery nudged me out of bed at dawn, and I sneaked down to the beach, hoping the roll of the determined waves might spark some elegant insight. A flock of pelicans was dive-bombing the surf, as intent on nabbing a fish as I was on distilling the difference between what I thought I should do and what I really wanted, when I heard a voice, direct yet childlike.

“Do you know how brown pelicans die?” A young woman was clearly talking to me, so I shook my head. She was close enough that I could see a smattering of freckles across her nose, but her eyes were hidden behind dark sunglasses.

“They hit the water so hard when they fish,” she said, “that eventually they go blind.” She turned back to the ocean. “And then they starve to death.”

Yikes! I thought. They’re killing themselves, and they don’t even know it!

A bird plunged into the water on cue, coming up empty beaked, and my melodramatic metaphor about the hard-charging, self-destructive pelicans hit home. In that moment I realized that diving back into the troubled waters of my career—one that hadn’t been fulfilling for years—would certainly cause vision problems. What I needed was a new way to fish.

That night I shared this pelican epiphany with Ethan. I pitched the idea of leaving Los Angeles, which I saw as partly to blame for the rat-racing, beauty-worshipping, stress-driven life I’d created. The KNBC job offered me a direct route back into that life, one that would allow us to maintain full-time help, the Bloomingdale’s credit card, and the kids’ expensive school. But taking the job now would be the psychological equivalent of a pelican’s slow suicide. A low-budget quest to find a new way of living, I insisted, would lead to happiness.

“Sounds like an expensive midlife crisis,” Ethan said, being as cautious as I was being impulsive.

“It’s a midlife adventure!” I argued. “We’ll rent out the house and sell our cars to pay for it.” Ethan’s green eyes still looked doubtful. My germaphobe husband loves to travel, but not when hot water and soap aren’t readily available. “And I’ll homeschool the kids!”

Now he looked horrified. “You can’t run away from your problems, Suzanne,” he said, but I could see he understood that this opportunity to change might never come again.

“I know,” I sighed, “but in this case running feels right.”

Ethan thought for a moment, considering whether to take this leap of faith, and then smiled. “Then let’s run, baby!” he said, and I hugged him, feeling his strong, unfrazzled heartbeat beneath his blue Triumph T-shirt. “Let’s run.”