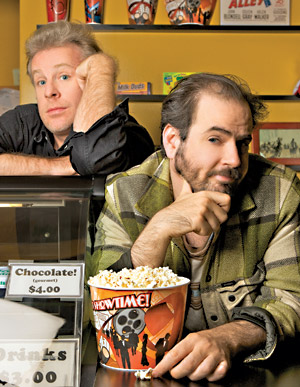 The clock is pushing eleven at the Silent Movie Theatre on Fairfax Avenue. The credits have rolled for Putney Swope, the chaotic 1969 send-up of black power and the advertising industry directed by Robert Downey Sr. Time for Hadrian Belove and Tom Fitzgerald, cocreators of the Cinefamily revival program, to retake the stage and introduce Pound, a seldom-screened and borderline-unwatchable film that’s remembered now, if at all, as the motion picture debut of Robert Downey Jr. and is tonight’s second feature. Though the director’s five-year-old son portrays a puppy and appears for less than 30 seconds, he still says something obscene about the male anatomy.

In a battered black hat with a narrow brim, his cheeks covered with a five o’clock shadow, Belove squints at what’s left of the crowd, most of it clustered in the easy-clean couches he’s deployed across the first three rows. “Downey had written Pound as a play in the early ’60s,” Belove says. “It was one of his first pieces. So when he got his first big chance to make a studio film because Putney was a hit, this was the thing he pulled out—‘My dream project.’? Tom, do you want to say a few words?”

“I don’t know where to start,” Fitzgerald says, cracking a smile.

Since the advent of the videotape, the L.A. revival and repertory house has tended to be a tumbledown venue that screens Casablanca or The Godfather every other week for audiences willing to put up with brittle prints, blown speakers, and seats whose loose springs drill into the spine. Over the past decade the nonprofit American Cinematheque at the Egyptian and Aero theaters and the UCLA Film & Television Archive screening series have filled the void with an academic sobriety (though, to be fair, idiosyncrasies do slip in). Cinefamily, which debuted in November 2007, is a revival program as transformative and delirious as filmmaking itself. “I think we’re way beyond ‘There are 100 great films, and let’s keep showing them,’?” Fitzgerald says. “?‘Here comes Annie Hall! Here comes Breakfast at Tiffany’s!’ Dare I say it—this theater is the only one implementing that different kind of mentality, of discovery.”

In the late 1990s, Fitzgerald bought and sold obscure movies on the gray market. Belove, who owned a freewheeling West L.A. video store called Cinefile, was one of his customers. When Belove took over programming at the Silent Movie Theatre, which had barely subsisted on a regimen of Charlie Chaplin and Buster Keaton, he brought in Fitzgerald to collaborate.

Cinefamily’s schedule includes high-minded retrospectives: Truffaut’s Antoine Doinel cycle, Warren Beatty’s work in the ’60s, the samurai films of Tatsuya Nakadai. It even shows silents on Wednesdays, providing some continuity with the theater’s former life. But it is the Saturday-night “holyfuckingshit” series that best showcases the Cinefamily sensibility. Under this banner of profanity and surprise, Belove and Fitzgerald have explored such themes as “When Animals Attack!,” “Funkadelic Fairy Tales,” and “Evil Children—Mondo Kinder-Carnage!”

The down-market offerings make for inspired and comic film commentary, which is published in the Cinefamily monthly calendar and brochure. Here’s an excerpt from the synopsis of Starcrash, a 1978 Italian Star Wars rip-off that was shown as part of Cinefamily’s “Space Junk” series last November: “Amidst oversaturated acid-trip pâpier-maché sets, Hammer Studios starlet Caroline Munro stumbles through a sparkling array of gonzo intergalactic set pieces and cut-rate genre logic (‘Scan it with our computer waves!’).”

Belove and Fitzgerald spend as much time choreographing the electronic mood music and video montages that precede the night’s feature as they do coming up with counterintuitive film series. Social engineers as much as programmers, they have cultivated an audience of familiar faces through a membership program that allows unlimited visits over a month for about the price of two first-run-movie tickets and a small popcorn. About 200 have joined. On the patio the partners occasionally serve barbecue and pour free beer.

“I’m looking to convert people who are not hard-core filmgoers into filmgoers,” Belove says, “rather than fight over this small, hard group of cinema ghouls, those of us who’ve been haunting these theaters in our trench coats with our notepads. Here even the cinema ghouls take off their trench coats, and the next thing you know, they’re just having a good time like everybody else.”