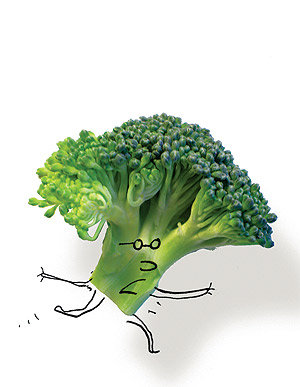 About two years ago I became the Dine editor of Los Angeles magazine. I went from patronizing nice restaurants mostly when my folks were paying to going out four or five nights a week, feasting on veal sweetbreads one evening, lasagna and butterscotch budino the next. Don’t get me wrong—this is a dream job, but a typical week’s menu does take a toll on your body. I’m not talking about weight gain; a four-mile jog in the morning keeps my belt on a steady notch. There are more sinister things lurking in rich food than calories: Now my skin breaks out, I have trouble sleeping, and I often wake up nauseated. This seems a fair price to pay for frequenting the best bistros and burger joints in the city; it’s just that I worry about the cumulative effects of this gastronomic indulgence.

Two years ago my friend Helena went on a raw food regimen. She had taken a hard look at her family’s history—one riddled with cancer and other illnesses—and hoped to break the cycle. A raw, or “living food,” diet, she told me, is based on the principle that heating food above around 115 degrees kills off the cells, enzymes, and other animate tidbits that raw foodists believe nourish the body. The diet also tends to be vegan: no meat, fish, dairy, eggs, or honey. Over the next year I saw Helena transform. Her already-petite frame shed 20 pounds. Her skin turned youthful and dewy, her eyes brightened, and this normally reserved girl became an outgoing beam of light. I watched bewildered as she happily munched apples and carrot sticks at her Las Vegas bachelorette party (I needed a cocktail to get through the lobby).

I don’t believe in dieting. My grandfather, who lived to a rowdy 98, swore by the creed “everything in moderation,” whether it was hot fudge sundaes or booze. In college I dabbled in calorie counting, a practice that stirred some obsessive-compulsive tendencies and landed me on antidepressants for a year. Nonetheless, I was fascinated with the idea that eating uncooked food could somehow change your life. That, and the dull pains in my liver, made me give it a try.

For me—a gal who doesn’t deny herself so much as a third slice of pizza—a week of raw food might as well have been a decade. The day before I began my adventure in uncooking, I spent more than $200 at Whole Foods stocking up on cold-pressed olive oil, raw tamari sauce, and raw almond butter as well as several fridges’ worth of produce and pounds of nuts. That night at a party I gorged on cupcakes and margaritas, the result of which was waking up on day one with a hangover. I was off to a good start.

Helena lent me some “cookbooks” and outlined a meal plan. Breakfast was a smoothie with strawberries, bananas, lettuce, water, and ice. Not exactly a Lucky Boy burrito, but tasty enough. For lunch I met Helena at Cru, a raw food restaurant in my neighborhood, where she gave me her best pregame pep talk over a beet salad, garlic kale, and a Hawaiian “pizza.” The cashew “cheese” on the pizza was satisfyingly fattening; the kale leaves were springy and rustic. I sipped an agave-sweetened herbal tonic, felt my hangover subside, and decided I could do this.

On day two it hit me. First the caffeine-withdrawal headaches (you’d have thought I’d been living with a bag of French roast on an IV drip), then flulike pangs throughout my body. Oddly, I wasn’t craving cooked foods, probably because of the massive quantities I was taking in: fruit smoothies, mega salads, entire avocados, rich seed pastes, nut butters. I could eat as much as I wanted, so long as it was raw. After a lovely dinner of zucchini ribbon “pasta” with raw marinara sauce, I went to bed…and promptly got up. The next five hours are not something I wish to discuss in detail. The concept of detoxification had always seemed a medical myth to me, but as I lay on the couch at 4 a.m. wrapped in blankets, I wondered whether this was indeed penance for the roughly 400 fat- and toxin-filled meals I had consumed during the last two years.

Most raw foodists quickly abandon any sort of formal meal structure in favor of a grazing approach, and now I know why. I’ve never spent more time in the kitchen. Sunflower seeds need to be soaked overnight and then pureed to replicate a creamy “tuna” salad. Kale should be massaged with oil to make it tender. As the week went on I noticed my taste buds changing. Foods that were delicious at the beginning of the week suddenly seemed too salty, and using even a bit of uncooked garlic now overwhelmed me. I slipped into a funk, partly because of the continuing effects of the detox (Helena had warned me) but also because of my emotional ties to food. I love food. I love cooking. I love dreaming about what to make, where to dine, and what to order. I get paid to spend at least eight hours a day immersed in the larger culture of eating. Without that, I found myself questioning who I was and what exactly I had dedicated my life to.

On day seven I awoke at 6 a.m. (without an alarm clock, no less) feeling refreshed and lively. I stepped on the scale to find that I had lost four pounds. I whipped up another breakfast smoothie—the one part of the diet I’ve since incorporated into my daily routine—packed a zesty avocado wrap for lunch, and went to work feeling light, energetic, positive, clean. I finally sensed what Helena must have been experiencing. This isn’t something I’m ever going to adopt as a lifestyle—sorry, Helena, I still think you’re crazy—but a week spent noshing on raw veggies seems a much more reasonable way to cleanse the system than glasses of water with cayenne and maple syrup. Did the knowledge that I was headed that night to the Langham Huntington to try chef Michael Voltaggio’s outrageous menu have anything to do with this newfound optimism? Perhaps. I skipped his seasonal vegetable plate; the duck and lamb weren’t so lucky.

Where to Go Veg Out

Leaf Cuisine
The walls are the same color as most of the food, but that’s a good thing. Enjoy collard green wraps, hefty salads, and nongreen breakfast items like raw cinnamon rolls and oatmeal. » 11938 W. Washington Blvd., Culver City, 310-390-6005.