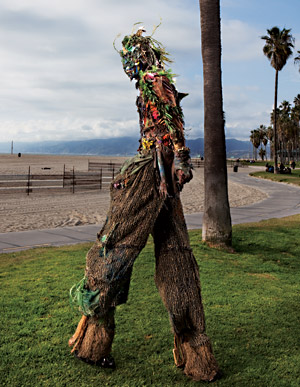 Some Angelenos don’t wait for Hollywood to discover them. Their fame is self-generated and, in a city of narcissists, hard won. Other characters express their passions in public with such missionary zeal, they make our own bashfulness all the more apparent. Music, environmentalism, and the benefits of shaking your hips drive the street personalities who brighten the schlep of our daily commute. For those about to rock public space, we salute you. » The éminence grise of boardwalk performers is inline-skate-dancing, electric-guitar-playing Harry Perry. Thirty-six years after he first hit the beach, the practicing Sikh is still waiting for his big rock and roll break. Why? “To be a great guitarist you need to play in excess of eight, ten hours a day.” Fantasy: For Live Nation to put out his record and book him on tour. “When I was onstage in Wisconsin once and 30,000 people were cheering, I felt the g-force. I want that.” Peanut gallery:  “People in Venice take my picture. In West Hollywood they’re more into the music.” » For 30 years drivers passing the Silver Lake Reservoir have seen a bare-chested pedestrian, face buried in a newspaper, oblivious to all but the fine print before him. Long walks are a routine from childhood that continued after Marc Abrams set up a medical practice in the San Fernando Valley. Although he’s now retired, he still makes daily 20-mile treks. Why? “I get fresh air, exercise, and sun.” Media diet: “I read the New York Times, L.A. Times, Wall Street Journal, Daily News, and USA Today. Plus about 20 magazines a month, mostly about history and classical music.” Peanut gallery: “Sometimes people say, ‘You must walk because you have a heart condition.’ If I had a heart condition, I’d be dead.” » Jean Hooper, whose name coincidentally matches her favorite pastime, isn’t shy about her regimen: twirling for up to two hours several days a week outside her condominium on busy Venice Boulevard. If she isn’t waving to motorists, it’s because she’s too caught up in the show tunes playing on her headphones. Hooper brought hula hoops (even the ancient Greeks loved them) into fitness classes at L.A. schools nine years ago, then kept on hooping after she returned to work as a hairstylist. Secret weapon: “I use a Wave Hoop by Maui Toys. It’s got water in it. Those Wham-O hoops with air in them? I am not able to do those at all.” Peanut gallery: “I get gifts—pieces of fruit, a calendar, a baby hat, a jar of beads. One guy said he just wanted to give me money. I was actually in need of food at the time.” » It’s in the blood, says Dennis Woodruff of his V8-fueled showmanship. That Woodruff uses his Crown Victoria to publicize his latest movie production seems a natural offshoot for the self-proclaimed grandson of S.H. Woodruff, cobuilder of the Hollywood sign, who used motor vehicles to advertise his Hollywoodland development. Why? “It evolved out of being a frustrated actor. I don’t want to be like Angelyne and spend $10,000 on a billboard. I thought, ‘Why don’t I use my car to advertise myself?’ When that didn’t work, I started to write, direct, and produce films that I could star in.” Peanut gallery: “I told Quentin Tarantino that I didn’t know if my first movie would be any good. He said, ‘It doesn’t matter. You’ll learn from it and make another one.’ ” » He looks weathered enough that Venice Beach, his haunt, could have developed around him. But Lionel Powell has been strutting his eight-foot, six-inch frame (including stilts) for barely more than a year here. Clad in face paint, shrubbery, and pants that resemble moss, he hits the boardwalk in character most afternoons. Powell comes from a mythical place, he tells people, when not high-fiving them, posing for pictures, and dancing. Switching roles:  Sometimes Powell changes from his foliage into a white winged costume. Peanut gallery: Tourists have been known to cry out in fright when he emerges from a bush.