Home Uncategorized The Man With the Golden Touch 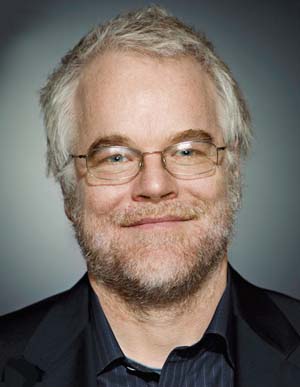 Did you see Julie Christie in Away from Her?
I made sure to watch it the night before the photo shoot, and she’s wonderful in it. Meeting her was great. I’ve grown up watching her, and to finally meet her… We laughed a lot. I’m awful with photo shoots. She was wonderfully disarming.

Your character, Gust, in Charlie Wilson’s War, is disarming, too. Did you come up with his look—the black hair, the pinkie rings, the gum?
I wish I’d gotten a chance to meet him—I think we’d have hit it off. The little bit I got of him, which wasn’t much because he was a CIA agent, was from photos and from the book. There was a bit of video of him hanging out with his friends in his hometown, and I took up communication with his son Greg, which was helpful. He was of Greek working class—not an Ivy League guy—and very proud of his heritage. I’m very Irish, and I knew there were some specific things I had to do.

What was that set like?
I had a ball, I really did. I don’t always feel that way. Sometimes work is work, and that’s not a bad thing. But Mike Nichols, Tom Hanks, Julia Roberts, and Amy Adams are very fun people to hang out with. They know how to run the day and do good work and still have a good time.

You often say you’re difficult to work with, but you’ve been in three of Paul Thomas Anderson’s movies, worked with Mike Nichols twice, and costarred with Meryl Streep in The Seagull in Central Park and now in Doubt. You can’t be all that annoying.
Well, I don’t think I’m an easy guy to work with sometimes. Ultimately I’m a good guy, though. At the end of the day, I don’t make it personal. My appreciation and respect for whomever I’m working with is clear. So, more times than not, I walk out of there on good terms with the directors or actors. I rarely if ever cross over into a place where any damage happens. It’s more that I’m diffi cult because I’m trying to get it right and I’m frustrated.

Your character in Before the Devil Knows You’re Dead initially seems like pure evil, but a single line about his childhood reveals a chink in the armor.
Yes, you get the idea that he was not a loved boy and that the other children were paid more attention, probably in an extreme manner. He’s not a murderer. It’s really a story about circumstances coming together and how they can turn a person into a killer.

When you’re playing nasty characters, do you have to find a way to like them?
Judging your characters is really an error. If you’re reading the script and you don’t get the part they want you to play—if you don’t like the person or you’re judging them all over the place—don’t play that part. Somehow you have to get behind the character, get in his shoes, advocate for him. You have to play that person, and that person thinks the decisions he makes are to better the situation. Somehow you have to understand him.

The professor you play in The Savages is lovable.
Some people love him, some people don’t. It’s a great lesson: People’s opinions about characters come from what they know or what they care to let themselves know or understand. It’s the same for actors. We read the material, and if we can’t seem to let ourselves know, or can’t open ourselves up enough to know, or aren’t advocating or understanding the character, even as awful as they might be, we don’t take the part.

What’s the last movie you went to a theater to see?
I just don’t see that many movies anymore. I go to plays more because I have a lot of friends who are in plays and there’s an immediacy to that. You can’t see a play once it’s closed, but I know I can get to the film later. I have two kids now, and I’m working a lot, so it’s harder. But I took my son to see Ratatouille.

Does having kids change your approach to acting?
It’s not about you so much anymore, so you’re not sitting there thinking it’s just you and your work and your girlfriend. So you pick jobs you want to do, people you want to work with, and you try to do the best you can, but the whole time you’re thinking, “When can I spend time with my kids?”

Has your son seen you in any movies?
He’s glimpsed me in posters, and he’s seen something on the TV at his aunt’s house—we don’t have a TV at our house. I don’t have a lot of kid movies to show him. When he gets a little older, maybe Twister. He understands me more as a person in the theater than in films because he comes with me to the theater when I direct.

Do you watch your movies?
It’s part of the process. I want to know what I did. I want to know if it worked and if it was any good. I learn from it. I’ll watch and go, “That sucks” or “That scene’s good.” Even in films that might be getting a lot of praise, I’ll watch totally differently. Someone will say, “How did you like your work in the film?” I’ll go, “Eh.”

What made you want to be an actor?
My mom used to take me to the theater when I was a kid, community theater in Rochester. I loved going—it’s still my most favorite thing to do, go see a play. I never thought, “I’m going to be an actor.” I just thought, “God, I’m never not going to go to the theater, it’s such a great thing.” And then in high school I got involved in it because I wasn’t involved in sports anymore.

Because you were injured?
I had a head and neck injury when I was a wrestler. When I was a junior or senior, it clicked in that I might want to study acting in college. I just thought, “Wow, I want to ride my bike to the theater and that will be happiness.” And it is. I became an actor so I could ride my bike to the theater, leave it at the door, and do a play. So people can have the same experience I had when I was 12 and saw All My Sons. That’s still why I’m an actor.

You bounce from off -Broadway plays to big-budget movies. Do you make a concerted effort to mix it up?
I’m not that conscious of it. In blanket terms, I get sick of myself. I get burnt out on something, like anybody. You’ve just been in a run of a play for four months and think, “I’m probably not going to want to do a play for a while.” Or you do a film and you have a couple kids and think, “Maybe I need not to do a film.” Your feelings ebb and flow, but it’s not specific like, “I gotta get me a role as a drug addict.”

You often play characters who are socially apart, who are uncomfortable to watch, like Allen in Happiness.
I think everyone has the capability of making everyone else in the room uncomfortable. Everyone has the capability of being socially apart. Being human means you’re really alone. It’s never easy for anyone, even the people who seem to have an ease with it. Ultimately, in the great roles, what’s being revealed is a person’s struggle, and that struggle will reveal the part that makes someone uncomfortable and apart from anyone else. I’ve never come across a character who doesn’t have those traits in some way.

When you won your Oscar for Capote, were you delirious?
I had a few moments of real panic. You don’t get any more nervous than that, and it’s televised every minute. You’re literally grasping for the next thought and you know you’re going to forget and it’s just survival. You walk off and think, “Oh, fuck me, what did I just do? Oh, my God.” You’re freakin’ out. It’s not like, “Oh, I won an Oscar!” It’s “Oh, my God! All those people!” In that moment the stakes are so high for pure humiliation.

Did winning change things for you?
That it happened. I can’t unhappen it. I hope that makes sense. Now you have won that thing. You can’t go back. Your anonymity gets lost more and more. Ultimately, and this is the good thing, it helps you get films made. If it raises your awareness in any way, it gives you a little more leverage.

Is it weird to be in the hardware store and have someone you don’t know say, “Hey, Phil!”?
No, that’s been happening for some time now, and it’s part of my life. When I’m with my son, it can be a little awkward. People will see you and have tunnel vision and not notice that you’re talking to someone. You might be walking across the street holding your son’s hand and they’re talking to you, and your son is like, “What the hell is going on? Some stranger is talking to my father.” But mostly it’s just, “Hey, man, what’s up?”