Home Dining The Life of Pie 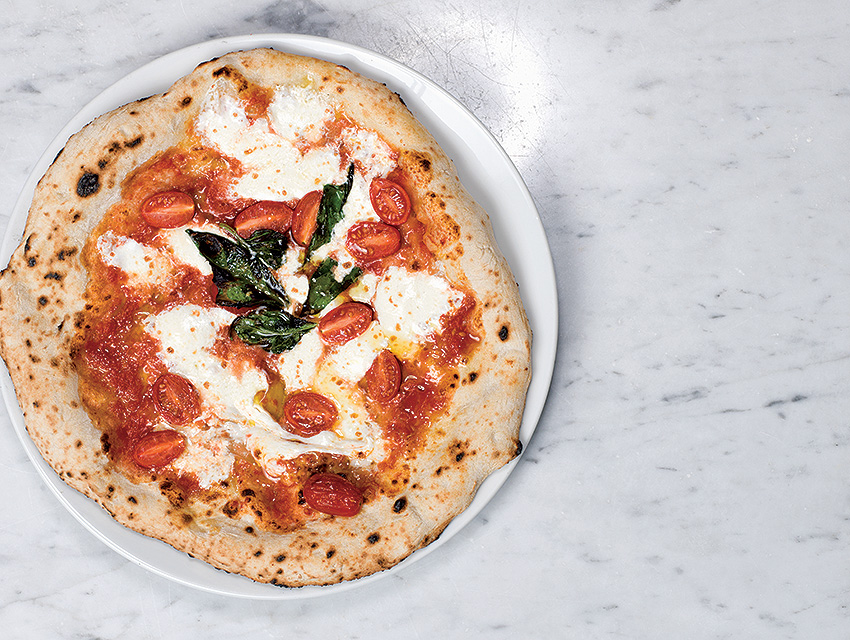 The story goes that the one true pizza comes from Naples. It has a fat, coiled crust gently flecked with char and is distinctly wet in the middle. The ingredients are as simple as they are delicious—the finest flour, high-quality plum tomatoes, real mozzarella, grated Parmesan, fresh basil leaves. The pie of pies is elastic, not crispy, sparing in its use of cheese, and wood-fired for 60 to 90 seconds. It is 11 inches in diameter and served uncut on a white porcelain plate. To eat it, fold the whole thing once, twice, three, or perhaps eight times—al portafoglio, “wallet style”—and devour.

This covenant was handed down to the Italian people at the foot of Mount Vesuvius—if not from on high, then by an enterprising 18th-century Neapolitan pushcart vendor who determined that New World tomatoes were not, in fact, poisonous, as was popularly believed. In the 300 years since, styles evolved, Hawaiian pineapple barbecued chicken pizza appeared, and artificial cheese somehow got stuffed into industrial crusts. But the original pizza, vera pizza Napoletana, endures.

Each pie begins the same way. “Fingertips, fingertips,” Peppe Miele says, standing alongside me. At 59, he is tall and thickset, with a high forehead and a close-cropped mustache. Miele is what you might call a close talker, and he can be imposing when he’s next to you. He flattens out an imaginary dough ball as I bear down on an actual one. Gooey stalactites hang from my hands. “Don’t overwork it. You’re overworking it,” he says, and sprinkles flour in my direction. The flour comes from Naples. Almost every ingredient does—even the water I used to dissolve the yeast.

I take a breath and press the mound into a disk. With a circular motion, I spoon out sauce I made by crushing and straining peeled tomatoes. I scatter slices of mozzarella di bufala around the circle. I add a few basil leaves. I drizzle extra virgin olive oil from a traditional copper dispenser, again in a spiral motion—“a reverse six from the center moving out,” as Miele instructs. He’s wearing a purple button-down shirt under a blue sport jacket and has the sort of European dash Americans appreciate but can’t often match. Like all great teachers, he makes you crave success. I grab a long-handled wooden paddle, add a dusting of flour, transfer the garnished pizza onto the peel, and slide my masterpiece into an oven heated precisely to 905 degrees Fahrenheit. Perfetto!

“OK, no, no,” Miele says, peering into the flames. Apparently I pushed when I should have pulled, and a hairline crinkle has rendered my pizza kaput. The sauce is leaking and burning. With a stainless steel peel and a touch of swagger, Miele skims it out and scraps it, and I’m back to punching dough.

I have come to Miele’s hidden-away Marina del Rey pizza school with a hunger that’s both real and cosmic. As a student in his Professional Pizzaiolo Training Course, I am here to immerse myself in the age-old techniques of Neapolitan pie making with a man said to be the foremost authority outside Italy.

A longtime L.A. restaurateur, Miele in 1992 joined the Associazione Verace Pizza Napoletana, a Naples-based governing body—yes, for pizza—that trains, certifies, and regulates chefs looking to display the VPN’s red, white, and green seal of approval. For 20 years his trattoria, Antica Pizza, which closed in 2011, was the only place in L.A. to bear the seal. But that was before the recent renaissance of Neapolitan pizza. Around Culver City alone this past summer, four Neapolitan-style joints—the renovated Ugo Café and neighborhood newcomers Settebello, WildCraft, and Blaze—installed fire-breathing hearths that turn out delicately blistered pizzas in slightly over a minute. There are currently more than 300 VPN-certified pizzerias in 25 countries, including roughly 70 in the United States. In all of L.A., only Ugo and Settebello (there’s a location in Pasadena as well) have gone the distance.

As head of the VPN’s North American delegation, Miele is equal parts brand protector, international trade booster, and pizza policeman. He and his five-person team have consulted in almost every new Neapolitan pizza operation in town (and in many across the United States, Mexico, and Canada). The acidity of the dough (pH 0.14), the temperature of the cooked tomatoes (167 to 176 degrees), the shape of the spatula (triangular), the handle of the spatula (beech or acacia wood)—all are bound by arcane musts spelled out by the VPN.