Home Uncategorized The Lady & The Desk 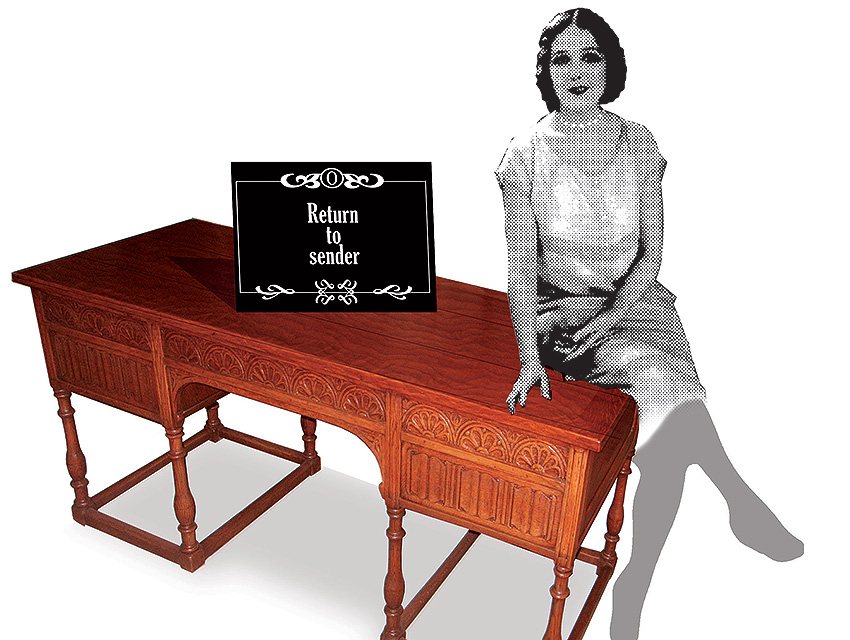 One dayin the mid-1960s, Herbert Tanney glanced into the waiting room of his busy medical practice in Beverly Hills to see a thin, distinguished gentleman arrive. The patient, a referral from a vacationing doctor, was Blake Edwards, the writer-director of Pink Panther fame. Tanney’s diagnostic acuity and warm manner resonated with Edwards. Following that visit, Edwards sent over a number of celebrity friends, including his wife, Julie Andrews, and Tanney’s patient files soon read like an L.A. studio directory.

The erudite and witty internist became a fixture at Industry dinner parties, accompanied by his wife, Helene, also a physician. At one point Edwards offered his doctor a role in the film Darling Lili, which he was directing with Andrews and Rock Hudson. Tanney was given the part of a violin-wielding Gypsy. As a child he had played in the New York Metropolitan Museum of Art Youth Orchestra. He performed so adroitly before the cameras that Edwards dubbed him “One-Take Tanney.”

Tanney grew close to Edwards and Andrews, along with James Garner, Dudley Moore, and Bo and John Derek. Once, in the pre-credit card era, he invited Andrews to lunch only to realize that his entire cash holdings consisted of a ten-dollar bill. He quickly ordered a cottage cheese plate and tea for both. Andrews guessed his predicament and offered to pay. Tanney replied, “Do you think I’m a gigolo?” Andrews howled.

A new medical campus was sprouting in Century City, a gleaming “city within a city” that was home to the Shubert Theatre, the ABC Entertainment Center, and the Century Plaza Hotel. Tanney led an exodus of doctors from the staid environs of Roxbury and Camden to suites in the Century Plaza Towers. With the assistance of Edwards’s set designers, he chose a Formica-topped, chrome-legged desk for his consultation room. A horrified Fred Jordan, a patient and head of the Producers Studio, insisted that “a supremely more elegant desk worthy of a preeminent clinician to the stars” was imperative.

His studio possessed just such a treasure, Jordan said, and he suggested a swap. Accustomed to Industry hyperbole, Tanney forgot about the exchange. He arrived at his office the next day to find Jordan’s workmen had dropped off a covered hulk. Tanney removed the padding to uncover an ornate six-foot-wide writing desk made of golden oak.

A note from Jordan recounted its pedigree. In 1919, four giants of the silent film era—Douglas Fairbanks, D.W. Griffith, Charlie Chaplin, and Mary Pickford—founded United Artists studio. The desk was a present to Pickford from actor and fellow Canadian Doug-lass Dumbrille. The filmdom provenance was just one of its many charms. Tanney was smitten with the expansive writing surface and by the carvings, which evoked a Renaissance library. He was not, however, above a touch of humor, writing Jordan that he expected a thank-you for taking such “an elephantine monstrosity off your hands.”

The desk had been the subject of speculation among film buffs for decades, and Tanney learned that it had been moved around 1920 from United Artists to Pickfair, the estate that Fairbanks had built as a wedding present for Pickford. As much as he enjoyed all the fuss, Tanney never felt as if he owned the desk; he was, he said, merely its steward.

After raising five daughters, Tanney and his wife divorced in 1974. Within four years the doctor had remarried a woman 20 years his junior: Donna, a high school teacher. He introduced his bride to the swirl of celebrity dinner parties and private screenings at the homes of his Industry friends. Older wives, other than Andrews, were cool to her. On one occasion Donna told Henry Mancini that as a Kansas teenager she’d danced alone with a broom to his “Moon River.” Mancini pronounced the story “charmingly Holly Golightful.” Otherwise, Donna, a shy woman, found the socializing unnerving. An exception was when the couple visited Bo and John Derek’s ranch in the Santa Ynez Valley. Donna loved the sylvan beauty and quiet as much as her husband did.

On a hot October morning in 1985, Tanney looked out the window of his office and saw smoke rising near Pepperdine University, not far from his Malibu property. Alarmed, he called home. The lines were dead. He raced from his office to the blaze area, talking his way through the police barricades. He found his wife in the living room watching TV, unaware that the fire had topped the ridge and was bearing down on the house. They grabbed important papers and pictures, and she slid his violin across the floor to him as they bolted out the door. Hours later their home was a charred shell.

Tanney was planning to rebuild in Malibu when Bo Derek called to tell him of a site that would be perfect for a family: 20 rolling acres with a view of the Santa Ynez Mountains. The close brush with death during the fire changed the Tanneys’ decision not to have children. They purchased the site and set about building their dream house. Tanney notified patients that he was moving his practice to Solvang. Garner refused to be left behind: It had taken him 15 years to get used to Tanney’s probing and sticking, he said, and he was not about to subject his body to another physician.

The Pickford desk’s span proved too massive for the doctor’s new suite, and the piece wound up in the family room at the house, where his wife co-opted it for school projects. One evening he watched her grading papers as he played Elgar’s Salut d’Amour at his music stand. She looked up and smiled. In that moment Tanney knew that while he’d been the recipient, the desk really belonged to Donna, its elegance complementing her beauty. The desk had found its “new Mary.”

Over the years Tanney’s new practice flourished. Despite the 120 miles between Solvang and L.A., many of the Hollywood regulars followed him, making day trips to visit the doctor. Donna gave birth to two daughters, who went with them on weeks-long trips to Switzerland, where she, Tanney, and the girls were given parts in Edwards’s Pink Panther sequels.

In 2007, Tanney announced his retirement. Garner affectionately said his farewells in a letter, adding, “Now where am I going to get my dope?” Tanney looked forward to practicing daily on the violin. Most important, his marriage needed attention. Donna had long been the dutiful factotum in the couple’s vibrant social world, in which he was the centerpiece. In his happiness and self-absorption he had been oblivious to her discontent at being relegated to a minor role. While he was hospitalized for a medical procedure, she changed the locks and obtained a legal order barring him from entering the home. She then filed for divorce.

Allowed a visit to recover his clothing and personal items, Tanney claimed the Pickford desk. He hoped to reconcile with Donna and believed that if she argued to keep the desk, it would be a sign that affection remained. Though she winced, she agreed to his taking it. He ruefully placed the desk in storage. The one-room cottage he was renting in Santa Ynez was monastic compared with his former home. It barely accommodated his books, film memorabilia, stamp collection, PC, and music stand. He forgot about the desk until he happened to catch a PBS segment on Mary Pickford. Fairbanks and Pickford were deeply in love, but their marriage foundered. Tanney was riveted. Was his own magnificent home on the hill his doomed Pickfair? Had the desk carried some marital hex?

He thought back on his involvement in films—19 roles in all—the marquee practice, the dinner parties, the global travel. They had provided a glamorous life, though one more geared to his passions than his wife’s. He no longer entertained the idea that his marriage could be saved; the divorce was proceeding without the civility he wished. Still, he believed that for a time he and Donna had found paradise. The Pickford desk was a symbol of that.

Tanney was seized by the idea of restoring it. Over the years a cleaning woman had regularly sloshed the desk legs and stretchers with an indiscriminate mop. The Pickford desk had been Pine-Soled. He was about to turn 78, and the timing seemed ordained. He retrieved the desk from storage and hired a craftsman to bring back its splendor. On the eve of his birthday he invited over a few friends to his garage and unveiled his “gift.” Their elation at its recaptured beauty mirrored his own. But they were even more astounded at what he outlined next.

After he had played an Elgar composition—“exquisitely,” he said—the burnished desk would be transported in a truck. Tanney would accompany it. They’d wend their way along the familiar oak-studded road up the steep hill to the home now flagged with a FOR SALE sign. Tanney would remain in the truck. The restorer and his assistant would heft the desk to the front door. They would ring the bell. And then, on his birthday, Tanney would present the Pickford desk to his wife.

Friends who called Tanney after his gesture of love were astonished to hear that Donna had received the desk with joy. Within a year Tanney had moved to an assisted-living facility in Pacific Beach, near two of his grown daughters, a worsening heart condition having affected his health. More than once Donna would make the nearly five-hour drive from Santa Ynez to visit her ailing spouse. The relationship rekindled by the desk grew into a quiet reconciliation. They dropped the divorce proceedings. Donna was with Tanney on June 28 of this year, just hours before he died of congestive heart failure at the age of 80.

Ned Welsh is a freelance writer who lives in Santa Ynez. This is his first piece for Los Angeles.