Home Books The Iconoclast Next Door 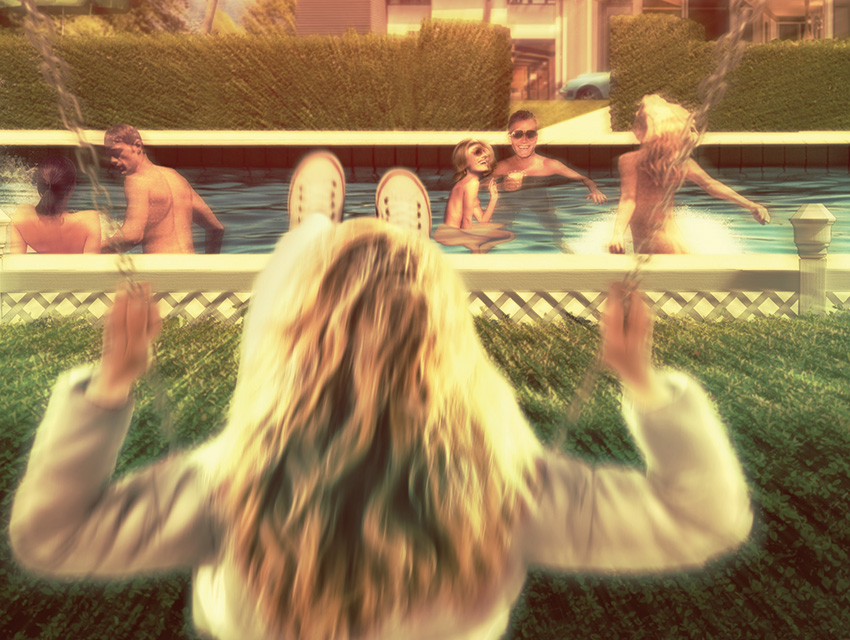 Behind a tangle of bushes in the backyard of my childhood home in Pacific Palisades sat a swing set with a reputation. Once it had been purple with pink stripes, but so close to the ocean, the salt air had turned it a rusty shade of mauve. Nonetheless the decrepit plaything lured kids from all over the neighborhood. The reason? The naked people in the pool next door.

They were the houseguests of Henry Miller, the author of the semiautobiographical novels Tropic of Cancer and Tropic of Capricorn. Mr. Miller (as I knew him) was renowned in the literary world for artfully melding character study, social criticism, philosophical reflection, explicit language, and sex. As children, we didn’t know any of that. All we knew was that on a bright and clear day, people would sunbathe nude in his backyard. Which is where our weather-beaten swing set came in. If you settled into one of the cold metal seats and pumped your legs hard, you could soar above the fence line and catch a glimpse of them. Occasionally we’d see Mr. Miller himself in the water—for the record, he was never naked and, according to his son, Tony, he didn’t exactly swim.

“He’d like to hang on to the edge and go hand over hand around and around the pool,” Tony says.

My dad tells the story of how, before deciding to buy our house in 1967, he knocked on Mr. Miller’s door. When the novelist answered, my father explained that he wanted to make sure the noise level wouldn’t be too much for a young family living next door. Mr. Miller—then 75—listened politely, assured my father there would be no problem, and shook his hand.

Years later, after my father and Mr. Miller had discovered a mutual love of Ping-Pong, they were whacking the little white ball back and forth one afternoon when Mr. Miller told him he was glad we’d bought the house. My dad remembers him saying, “Before you moved in, some idiot came to the door and…”

“I knew the ‘idiot’ to whom he was referring was me,” my dad says, but he never told Henry Miller.

Pacific Palisades has long been the stuff of Tim Burton’s fever dreams. White picket fences, manicured lawns—a child’s paradise. Every day I walked home from school with the other neighborhood kids. Some days we’d cut through a wild canyon; other times we’d stop at the park. No one had to be home until dinner, and we rarely were.

To some it might appear odd that the iconoclastic Henry Miller, who’d so famously documented his less-than-pure life in the Paris slums, lived in such a seemingly conservative suburban neighborhood. But Pacific Palisades was never your typical bedroom community. Back in the early 1900s, the Palisades had been the site of one of L.A.’s first movie studios. It was also home to a renowned Methodist reverend hell-bent (so to speak) on building a religious community there. That was just one of the neighborhood’s fundamental contradictions: straitlaced and bohemian, with a heavy dose of surf culture.

For generations the Palisades seemed to have drawn as many counterculture rebels as conservatives. Christopher Isherwood, the English writer, and the actor-turned-politician Ronald Reagan both called the Palisades home at the same time. Exiled German playwright Bertolt Brecht resided there, as did the novelist Raymond Chandler; creepily enough, during World War II Nazi sympathizers started constructing a complex in the neighborhood (it was never finished). Walter Matthau and his free-spirited wife, Carol, lived down the street from us. Many believed Mrs. Matthau to be Truman Capote’s inspiration for Holly Golightly in Breakfast at Tiffany’s. Some Saturdays my friends and I would knock on our famous neighbors’ doors, intent on getting autographs. Matthau, Adam West, and even Bugs Bunny himself, Mel Blanc, always happily obliged.

And then there was Mr. Miller, who’d moved to the Palisades in the early ’60s to be closer to his kids, Tony and Valentine, who lived there with his third ex-wife, Janina Lepska. At the time Mr. Miller relocated from Big Sur to the Palisades, most of his books were prohibited from being sold in the United States. Then in the mid-’60s, the U.S. Supreme Court lifted the ban. It was a victory for free speech and the Miller family. The author—who’d made little from printings of his works abroad—became financially comfortable for the first time in his life, which enabled him to buy the house on Ocampo Drive.

Tony remembers the place as a refuge. I recently asked him to lunch—we hadn’t seen each other in close to four decades—and we were sitting in a restaurant near the bike path in Santa Monica. Tony is 67 now; for years he worked at Ventanas Inn in Big Sur. “We loved that house,” he says of their home on Ocampo Drive. “It was the safest house I’d ever been in, a real home where you didn’t have fear that you were going to have to leave it or didn’t have money to pay for it.” It was, he told me, “our fortress of solitude.”

Back then there was an almost constant parade of admirers who visited the Millers’ fortress of solitude, including Steve McQueen, Bob Dylan, and Joan Baez. My mom met the expatriate British novelist and poet Lawrence Durrell next door, and my dad was introduced to Buckminster Fuller, the architect and author, over Ping-Pong. Then there were the nonfamous acolytes who would ring our doorbell and ask us if we knew Mr. Miller, and if so, what was he like? One time a French family traveled from Paris just to see where he lived. They camped in the local park for a week or so.

One particular visitor stands out in Tony’s memory: Pablo Picasso’s son. “Picasso had kicked him off the property in Spain, and he’d made it to the U.S.,” Tony says. “I open the door, and there’s this guy sitting there with a bicycle and a backpack. Said his name was Claude. He came in, and he and Dad talked for hours.”

Sometimes after breakfast you could see Mr. Miller—dressed in his terry-cloth bathrobe, his bald head catching the light—sitting in his front bay window, typing on an Underwood typewriter. Neighbors would spot him around the neighborhood. “He used to ride on his bike with his little cap on, doffing it to the ladies as he passed them,” says my dad. “He was a gentlemanly sort of individual. Not the type of person you would think of in reading his books.”

According to Tony, my parents were the only neighbors he remembers his father interacting with. My dad, a lawyer, was the one Mr. Miller summoned for table tennis—and the one he called whenever he locked himself out of the house (my father, a lifelong athlete, was nimble enough to climb a ladder to the Millers’ second-floor balcony). My dad was also the only person on the block who’d seen Mr. Miller’s front room, where the walls were covered with the autographs and doodles of his famous friends. My dad described the indoor graffiti as things you might write on someone’s cast. Some of the signatures did come from famous people, says Tony, but mostly “my dad would be the one who wrote on it. Like Muhammad Ali was never there,” he says, referring to a quote attributed to the boxer that was written on one wall. Apparently Mr. Miller liked something Ali had said, so he scribbled it there.

The first time my mom learned about the kids peeking over our fence, she was in the dairy aisle of the supermarket. There, in front of the half-and-half, one of my friend’s mothers revealed the real reason for our swing set’s popularity. While this disapproving parent found our peeping scandalous, my mother found it amusing.

“I didn’t think it was hurting anything,” she told me recently. “I was amazed that I had no idea. But it never bothered me.”

My parents seemed to be the picture of suburban life. My mother, whom some compared to June Cleaver, was always put together: hair done, makeup applied, even if she was home all day. She had dinner on the table when the streetlights came on, just like the other mothers on the block. My dad commuted to his downtown firm every day via Olympic Boulevard (the 10 didn’t yet exist). Despite appearances, they were also quirky. They spent a good amount of time at the racetrack and surrounded themselves with a collection of characters with monikers like “the Wall,” “the Weasel,” and “the Hat.” In the Palisades they fit right in.

My parents kept copies of Tropic of Cancer and Tropic of Capricorn high up on a shelf and out of my reach. They also owned Big Sur and the Oranges of Hieronymus Bosch and The Colossus of Maroussi. A few of the books were inscribed with messages from Mr. Miller—heartfelt notes that expressed how much he valued my parents as neighbors and, on one occasion, how sorry he was about the times his wife would run into the metal fence with her car. “Instead of steering a car, she would aim it,” says my dad, remembering how she’d often scrape the fence between our driveways.

When I was 11, I announced to my mother that my next grown-up book would be one of Mr. Miller’s. This put her in a tough position. She didn’t want me coming across any of his notoriously explicit passages too soon. She worried they might color my view of the polite old gentleman who bought my Girl Scout cookies. Quick on her feet, she came up with the perfect response: I’d probably not enjoy Mr. Miller’s books, she said, because they had a lot of math in them.

Tony Miller remembers hearing his friends talk about reading passages of his father’s books under the covers with a flashlight. He believes that taking them in out of context, one salacious paragraph at a time, does not do them justice. Tony has great respect for his father, as both a writer and a human being. He was, Tony says simply, tearing up, the kindest, gentlest person he’s ever known.

I finally read Tropic of Cancer in my early twenties. I was glad I’d waited. I wasn’t shocked—I expected it to be filled with sex—but I had a hard time reconciling the struggling writer protagonist with the septuagenarian I grew up with next door. It took a few more years of living before I understood that we all have different chapters in our lives. The Henry Miller I knew was in the final chapters of his.