Home Uncategorized The Front Yard Is The New Back 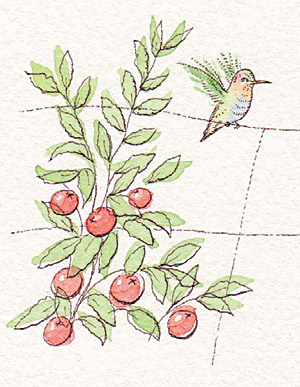 A woodsy fragrance—what the cedars of Lebanon must have smelled like—drifts into my living room. I realize it’s coming from the mulch in my new vegetable garden. Like others I was swept up in the if-Michelle-Obama-can-wield-a-shovel fever, but I never imagined that my quest for independence would emit such lovely scents. The mulch came free, too—from Griffith Park, chips and shreds and trimmings from L.A.’s streets and playgrounds, dispensed to anyone willing to bring a bag.

Because my backyard has long been populated by dogs, which have enthusiastically used it for plane spotting, squirrel baiting, and digging to China, any vegetable cultivation there was confined to pots. If I wanted to grow my own—and in this age of trucked-in, tasteless store produce and rising farmers’ market prices I was more than motivated to do so—there was nowhere to go but out front, where the pedestrians roamed. The best choice in my case was a wide triangle of garden screened from the public by a mature ceanothus on one side and a 60-year-old boxwood hedge on the other. The gardener cleared the crabby grass, and I sent a soil sample for testing, expecting a dulcet discussion on acids and alkalines. Instead I got a skull-and-crossbones sock to the gut: “The production of leafy greens, root crops is not recommended” in this soil. My dirt had a 42 parts per million lead count. While it was lower than the 93 in Michelle’s Washington garden (a lead level that drew unwelcome attention from Mother Jones magazine), I was going to follow Europe’s cues and not plant in it.

Silver Lake Farms’ Tara Kolla has been an urban grower for six years. She is familiar with city veggie crises. Rather than replace all the soil, we mapped out one large raised bed in full sun, where the dirt would be substituted by an organic mix of all the things plants love. The gardener, however, was blanching at the cost of the redwood to frame it. “Treated wood is cheaper,” he offered, sweetly oblivious to the cost of organic gardening. “Redwood,” said Kolla. He blinked. “Redwood,” said Kolla. Two nights later he called, reeling at the $100 price. “Redwood,” I said.

Strategically placed whiskey barrels—to take advantage of partial shade—and a long planter box along the dining room wall (made by an acquaintance of Kolla’s and a steal at $39) supplied the rest of the growing space. Kolla’s husband, Beat Frutiger, when he isn’t art directing films, helps her install irrigation systems: Modigliani-like lines (in the beds) and circles (in the barrels) of slender plastic tubing. It was my biggest single expense, at $1,000, but compensated for my slacker watering habits.

The Bermuda Onion Triangle, as I was now calling it, needed only babies, my impatience vaulting me past the play-God-with-seeds stage. In one week of shopping I went from the sublime (tender organic seedlings propagated behind a 1911 Craftsman by a 29-year-old Berkeley grad) to the extreme (muscular plants in dizzying rows watched over by weathered attendants at the giant San Gabriel Nursery).

As my veggies nestled in their beds, the city overheated. I watered extra by hand and suffered at every wilting leaf. They needed…“an umbrella—just stick one in the ground,” counseled Kolla. I pictured the looks my ratty black model would get and envisioned a hipper fashion statement, say, Chinese paper parasols. Or a London Fog bumbershoot. I regularly stole peeks out the window, looked forward to before- and after-work checkups when I circled the beds and envied them their tranquil outdoor lifestyle. I made a Mediterranean stir-fry of chard, golden raisins, garlic, paprika, and white wine vinegar. With the spinach I crafted a casserole with rice, nutmeg, mint, and oregano and topped with cheese. Every night I had salads. The vegetables were so fresh and easy to procure that I was eating more of them. One night a friend called, panicked. He was cooking for revered chef Gino Angelini and needed fresh lemongrass. The stuff in the markets was like straw. Could he have some of mine? (Yes.)

Kolla returned a month later with a snack for my garden: composted horse manure from an Altadena source that she gets so cheaply ($10 a truckload) that she gives it to me for free. We plotted where to plant the winter vegetables: cool-weather tomatoes like the Siberia, cauliflower, broccoli, pumpkin, onions, potatoes, and more lettuces. I passed on brussels sprouts, which I consider the devil’s handiwork. I was eager to show Kolla my find, a “tea bag” filled with worm castings and cocoons from which one steeps a bucketful of brew. I bought it for a dollar at the Santa Barbara Farmers Market. I was intrigued by the address, which shows the Santa Barbara Worm Farm in one of the priciest parts of Montecito, a wiggle from Oprah’s $51 million estate. I called owner Sandy Lejeune. He had been selling the worm compost solely to landscapers until last year, when he began bagging it for hobbyists like me.

I asked Kolla whether the brew would help fight off the aphids, which had been attempting to colonize the chard. She was hopeful. I invited her over for a tea party.

What the Neighbors See

Six steps that spell out how one organic garden took root in urban L.A.

Firm Beds
Redwood planks from Anawalt Lumber, held in place by metal braces, frame the 4-by-12-foot bed. The 9-by-2-foot planter was custom-made for Tara Kolla of Silver Lake Farms, and the half barrels were purchased at Home Depot. Kolla lined the containers by stapling Visqueen construction-grade plastic sheeting to the inside walls and base, then punched holes in the plastic at the bottom and added a layer of gravel for drainage.

Happy Soil
Kolla devised this formula: 40 percent organic potting soil, 40 percent composted horse manure, 10 percent “play sand” from Home Depot, and 10 percent worm castings (we used Gardner and Bloome Worm-Gro). A handful of Dr. Earth #5 fertilizer was mixed in per foot of growing area. A month later Kolla returned with more composted horse manure for topping off the bed and containers, which had settled somewhat over the weeks.

Be a Drip
A pressure regulator (essential to preventing blowouts) with a built-in filter was attached to an existing sprinkler valve, and PVC extensions were run to each planting area from an existing underground pipe. Quarter-inch drip lines with six-inch spacing from dripworks.com were laid in rows six inches apart in the raised bed and planter box and in circles with similar spacing in the barrels. A DiG timer controls watering (ten minutes once a day during warm periods).

Sun Dialing
Light-loving vegetables and fruits were put in the raised bed, which gets morning and afternoon sun. Plants that do well with partial morning sun were put in the two barrels shaded by a large ceanothus. The remaining barrel and planter box were used for the veggies that like full morning sun and bright light in the afternoon. To prevent transplant shock, the soil was watered just before planting; watering was then done by hand with a shower wand for the first five days.

More TLC
Heat-stressed plants were shaded in the first week with a $10 paper parasol from Chinatown. OSH carries a triangle-shaped “sail” of sun netting that was a design plus but a cost downer at nearly $50. But OSH did yield a charming, affordable tall metal trellis for the zucchetta and scalloped wire flower-bed edging for the cucumber support. Diatomaceous earth was sprinkled along the outside of the raised bed to keep out ants, which colonize aphids.

Ground Control
Free mulch from the Griffith Park Composting Facility, which shreds tree and shrub trimmings from city street and park maintenance, was spread on dirt pathways to keep down weeds (the facility, about a mile from Travel Town, can be reached at 323-913-4166). Drought-tolerant ornamentals such as sunflowers, penstemons, and alyssum were planted near the bed to attract bees and other beneficial insects—as well as to lend the garden a dash of color.