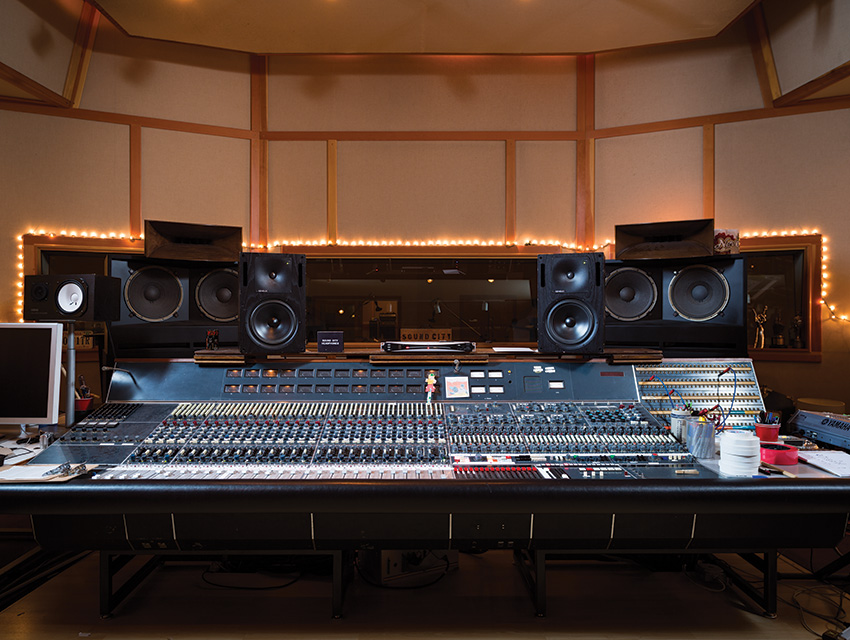 When Nirvana came down to L.A. to record Nevermind in 1991, nobody knew who we were, so our budget was pretty small. We picked a recording studio in Van Nuys called Sound City because it was cheap—and because it had a Neve 8028 sound board. Rupert Neve is an English electronics engineer—he’s still alive and in his eighties—and his handmade, hand-wired analog recording consoles from the 1970s were famous for giving music a warm sound that was good for rock and roll.

Sound City Studios was in a warehouse complex near the Budweiser Brewery, and the owner, Tom Skeeter, hadn’t done any decorating since they opened in 1969. I think they rented the same couch for 25 years—they didn’t even bother to buy it. Everyone knew Sound City was a shithole, but that board brought out the best and the worst in musicians. A Neve can enhance the sound of an instrument to make it more powerful, but it is what it is. It can’t make a bad band sound better. There are no shortcuts or digital manipulations. When Tom Petty recorded Damn the Torpedoes, the band played “Refugee” more than 100 times because they wanted the perfect take. It had to be real.

In the early ’90s, Sound City nearly closed because producers and rock stars didn’t want to come out to the Valley, so it stayed every great musician’s best-kept secret. You’d walk down the hallway, look at the records and think, Neil Young’s After the Gold Rush was made here? Rick Springfield’s Working Class Dog and Cheap Trick’s Heaven Tonight—are you serious?

Nirvana spent maybe 16 days there—we recorded and left. Six months later Nevermind was number one and we were selling millions of records. Then everybody wanted that noisy sound, and Rage Against the Machine and Weezer recorded there.

I remember coming back to Sound City and seeing that they’d put Nevermind ’s gold record on the wall. I had offered to buy the console before, so when it did come time to sell the board, they picked me to have it. It’s one of a kind, so it was either going with me or to the Rock and Roll Hall of Fame. It hadn’t been moved in 40 years, but I unplugged it, put it on a truck, moved it six miles to my studio in Northridge, plugged it in, and it works just fine.

I initially wanted to do a 12-minute Web piece on Sound City, but there were too many people and the stories were great, so I made a documentary called Sound City: Real to Reel. This is where Lindsey Buckingham and Stevie Nicks met Mick Fleetwood. They passed each other in the hallway, and Mick had heard a song they recorded. Two weeks later, when his guitar player quit, Mick asked someone about Buckingham as a replacement. He was told, “If you take him, you have to take his girlfriend, too.”

People don’t understand there’s a whole life and depth behind every song on the radio, whether it’s Queen’s “Bohemian Rhapsody” or Justin Bieber’s “Baby.” But it was these people with that piece of equipment who changed the world.
—As told to Nancy Miller

5 Reasons Why You Should Care About This Giant Heap of Metal:

1. Producers can’t cheat with it
No Pro Tools, Auto-Tune, or cherry-picking bits of several songs to craft one flawless gem. Mess up on the Neve and you either start over or live with imperfection.

2. It’s the only one like it on Earth
There are four Neve 8028 consoles in existence. This particular model was custom made for Sound City in 1973 for a whopping $72,000.

3. The musicians you love all love it
Trent Reznor, Josh Homme, Tom Petty, Neil Young, and John Fogerty are a few big names who pay tribute to the Neve in Grohl’s film. Some even took a pen to the board.

4. It’s got serious mojo
The first song recorded on it was a tune performed by Stevie Nicks.

5. It was built for rock and roll
The owner of the studio ordered it, hoping for Beatles-level runaway success.

Cheap Trick
Heaven Tonight
(1978)
Many consider this to be their best studio work, thanks to the polish on “Surrender.”

Nirvana
Nevermind
(1991)
The surprise hit sold more than 30 million copies and ushered the studio into a 1990s renaissance.

Nine Inch Nails
With Teeth
(2005)
With segments recorded here, Trent Reznor showcased his mastery of mixing digital with the traditional.