Home Crime William Bratton Is the Most Famous Cop in America 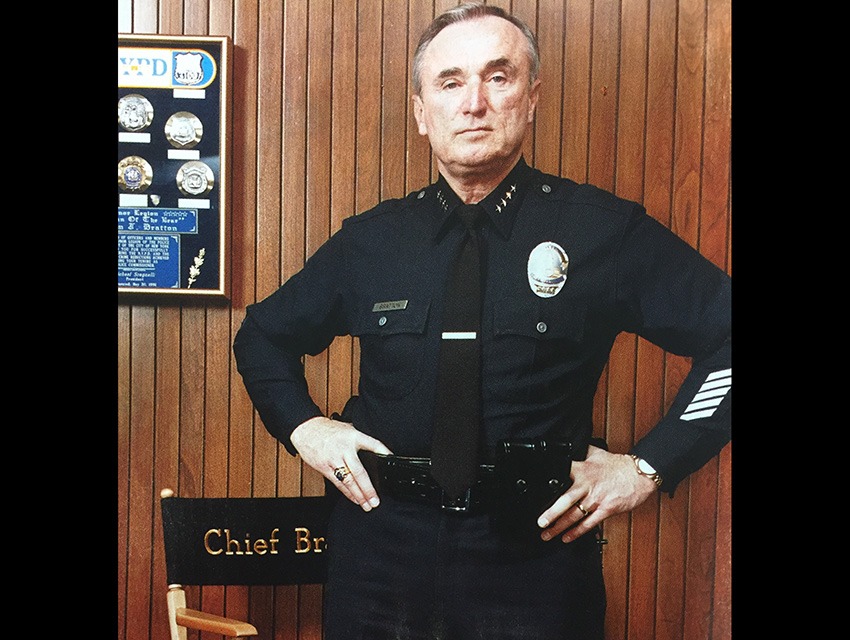 And so, in the city of Los Angeles, crime went down.

“In the last year, we’ve seen a police department that has come back into the streets,” proclaimed Police Chief William J. Bratton. “It’s been ten tough years. Now they’re back seeking the stature they had in the ’70s and ’80s. Next year, I’m confident it will be back.”

And the people applauded.

That is, the several dozen folks who turned out one recent evening at the First Presbyterian Church in Hollywood for a town hall meeting with the chief. He has been holding these meetings throughout the city to hammer home his messages about making L.A. safe and how he’ll need more money to do it—much more—trying to stir up some civic emotion. But this night, anyway; the smartly uniformed officers roaming the room seemed to outnumber the citizens.

After 16 months, Bratton is still getting the feel for his new job. The LAPD is his sixth department. A native of Boston, he headed the Massachusetts Bay Transportation Authority Police, the Boston Metropolitan District Commission Police, the New York City Transit Police, the Boston PD, and the NYPD. He is 56. In none of his previous top jobs did he stay longer than three and three-quarter years. “My claim to fame is fining departments,” he told me in 1997 when he was considering applying for the LAPD chief’s job that ultimately went to Bernard Parks. “You guys are a very big challenge out there.”

Bratton figured he knew the department well. He had applied for the chief’s job following the departure of Daryl Gates in 1992—only to pull out when he realized the LAPD, on the heels of Rodney King and the riots, was looking for an African American chief. In 1997, he thought again about applying but did not. More recently he was appointed as one of the monitors to oversee the LAPD’s progress in complying with a federal consent decree mandating reform. Even so, the new chief was in for a bumpy landing. He has complained repeatedly that a force of 9,300 sworn officers is shockingly inadequate to protect a city of 3.8 million people spread across 469 square miles. But the LAPD has always been undersized—lean and mean, they like to say—so why did Bratton act as if this were news to him?

Sitting at the large conference table in his office downtown on the sixth floor of Parker Center, the LAPD’s headquarters, he says, “Until you actually live in Los Angeles, move around and get a sense of how big this place is, you don’t fully appreciate how small the department is. Normally you talk about New York having four cops for every one we have here on a per capita basis, but based on square miles New York has six times as many So as you drill down it gets worse and worse.”

As a result, he says, “the LAPD functions like a fire department. You run from fire to fire and you suppress them. But the ability to sustain that suppression becomes very difficult because you have to move on to the next incident.”

That, as Bratton would learn, was only the beginning.

In a way, the Chief is like the city he has come to rescue—nuanced and hard to decipher. He is not a physically imposing man—medium height, fit, sallow complexion, his face revealing little. Unlike some people of power who can make a room come alive simply by entering it, Bratton seems to slip in unnoticed. A reporter can spend an hour with him and come away with all questions fully answered—indeed, he never seems caught off-guard, or to hesitate, or to pause to collect his thoughts—yet record no memorable gestures or anecdotes, or feel any sense of connection with him. Charm and humor are rarely on public display, although one senior officer notes, “Every once in a while he comes up with a good one-liner.” It is only when he stands before his officers or a large group that Bratton’s commanding presence resonates. “He reminds me of Patton,” one friend says.

The department Bratton inherited was, by most accounts, a rudder less ship. Hollywood captain Mike Downing, a 22-year veteran of the LAPD, says, “For the last decade, we operated according to CCP—Control, Contain, and Punish. The idea was to control the thoughts and opinions of the cops, contain them from practicing the art of policing, and punish them not only for malicious acts but for minor mistakes—mental errors.” Under the leadership of Willie Williams and then Parks, officers complained they felt frustrated not only by the street violence they were unable to quell but, worse, by the puppet-like strings that stymied them from within the department. Many felt lost. “It was like having two substitute teachers, Detective Jeff Godown says. Morale was so bad that the department bled 900 cops to retirement and other jobs in 2000 and 2001, and few new recruits could be dredged up.

There was also the persistent stench from the Rampart scandal, which erupted in 1999, when Officer Rafael Perez, seeking leniency for stealing cocaine from an evidence locker, told authorities of Rampart officers trafficking in narcotics, framing and beating civilians, and other corrupt practices. Distrustful that the full story would ever emerge, the Justice Department stepped in and sued the LAPD for engaging in a pattern or practice of excessive force, false arrests, and unreasonable searches and seizures. The city denied the allegations but, rather than face costly litigation, entered into a civil rights consent decree. With the feds eyeballing his every step, and several hundred officers involved in rejiggering policies and procedures, Bratton has until this June to satisfy 140 provisions. (At last report he had complied with 62.)

And oh yeah. Two months after he was sworn in, Los Angeles was crowned the murder capital of the country for 2002, with 658 homicides.

Few on the force knew much about Bratton except that he was the New York guy who in 27 months almost magically made crime disappear from the nation’s largest and most violent city. He was brash, cocky, and smart, a man who liked to see his name in print—to the fury of Mayor Rudolph Giuliani, who thought only his name should appear in print and who required all policing strategies to be announced through city hall.

Having endured that, dealing with Mayor James Hahn and his laid-back Paradise on the Pacific probably seemed to Bratton like early retirement. But L.A. can be deceptive. Few outsiders have ever succeeded in negotiating the city’s subtle political machinations. “We chew people up and spit ’em out, and we don’t like outsiders in this town,” says former city councilman and now assemblyman Mark Ridley-Thomas. “I’ve seen so many get hurt—in education, the Department of Water and Power, the MTA, and finally in the police department.”

The Takeaways From Mark Ridley-Thomas’ Indictment and Suspension