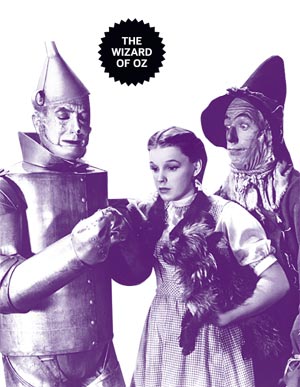 The first movie I fell in love with: A black-and-white Betty Boop cartoon that my mother took me to see in the mid-1930s. Until then I had no idea what a motion picture was. I was hooked.

The movie I will watch again and again: Jules and Jim. It’s mercurial. I always find something new in the relationships, even in the lyrical moment when Jeanne Moreau sings “The Whirlpool.”

The movie star I will see in anything: Fred Astaire. He was a marvelous actor as well as a remarkably effective singer. But he could also do something no one else in the world could do so well and express the widest range of emotions in the doing of it. As opposed to Adam Sandler.

The movie that stops me in my tracks when I’m channel surfing: High Fidelity. It has Nick Hornby’s wonderful words, John Cusack’s perfect performance, and a special sense of tenderness that’s completely at variance with the subject matter and the record store setting.

The movie that made me want to be a critic: There wasn’t a single movie. I was one of those lonely kids who went to Saturday matinees at the Teaneck Theater in suburban New Jersey. I didn’t care what was on the screen—MGM musicals, Don Winslow serials, Abbott and Costello’s Buck Privates, Olivier’s Henry V, and Bob Hope road movies. There’s also something else. My father was a steel salesman, but he had thwarted showbiz ambitions. He’d bring home the bulldog edition of The New York Daily News and have wonderfully vivid conversations with my mother about the movie reviews.

The first movie I fell in love with:  The African Queen. It came out in 1951, when I was six. It was such an adventure, so exotic, and I’d never seen a character like Humphrey Bogart, this grizzled good guy/bad guy. I couldn’t get over that scene where they pull the leeches off him.

The movie I will watch again and again: The Third Man. I first saw it as a kid on TV, and it never loses its magic. There’s the great script by Graham Greene, the noir vision of Vienna after the war, and an iconic performance by Orson Welles.

The movie star I will see in anything: Marlon Brando. He’s electric. He leaps off the screen. Even when he’s being ridiculous, you can’t keep your eyes off him.

The movie that stops me in my tracks when I’m channel surfing: The Lady Eve. It’s got Henry Fonda, Barbara Stanwyck, and one perfect scene after another.

The movie that made me want to be a critic: The 400 Blows. I had an assignment in my French class at Beverly Hills High to talk about the film in French—which was not easy. François Truffaut made me see movies in a new way.

The first movie I fell in love with: If I tell you the truth, it’ll sound absurd, but my parents were bohemians, and as a consequence my favorite movies at age eight were François Truffaut’s Jules and Jim and Orphée, by Jean Cocteau. I was not taken to any Disney movies.

The movie I will watch again and again: The Wizard of Oz. It’s not just an aesthetic object—it’s also a childhood object. It’s like an old blanket. I appreciate its sense of melancholy and loss. It’s profound.

The movie star I will see in anything: I have a rotation of favorites from the classical Hollywood star system. For instance, I adore Marilyn Monroe, even after she has been chewed up and spit out so many times. Contemporary actors are more difficult. There’s not the long cultivation of a personality. That said, I’m always interested in what Nicole Kidman does.

The movie that stops me in my tracks when I’m channel surfing: The Godfather. The movie profoundly critiques the costs of capitalism. Its opening line is “I believe in America.” It is also just a staggering object to behold.

The first movie I fell in love with: The Wizard of Oz. Because my uncle was the president of the L. Frank Baum Society, I’d already been inundated with Oz-iana. He had all these leather-bound Oz first editions. I saw the movie at age seven at the Howard Theater in Chicago, and I realized what my uncle was so excited about.

The movie I will watch again and again: Lawrence of Arabia. I saw it in 70mm when it came out and again in 1970. After that I guaranteed myself I’d watch it every seven years, and I have. The movie forced me to be a grown-up moviegoer. It embodied what I hoped movies could do—and still do.

The movie star I will see in anything: Françoise Dorléac, Catherine Deneuve’s sister. I was mad for her like I’ve never been mad for any other actress. She was in The Soft Skin and The Young Girls of Rochefort. Then she died in a car wreck. She had an electric personality and incredible looks.

The movie that stops me in my tracks when I’m channel surfing: The Big Sleep. It’s everything that’s great about the old studio system: the dialogue, the scenes, the director—Howard Hawks. And it’s L.A. at its juiciest and seamiest.

The movie that made me want to be a critic: There was one week in August 1968 when I saw the following movies—2001: A Space Odyssey, Petulia, Belle de Jour, Targets, Rosemary’s Baby, and The Thomas Crown Affair. I still think it’s the best week I’ve ever had seeing movies. 2001 had such an impact on me that I felt compelled to write down my impressions. A month later, as a college freshman, I wrote my first film review for The Stanford Daily.

The first movie I fell in love with: Old Yeller. It’s sad but not pandering. I watched it again recently with my daughter, and she had the same reaction. It’s tough-minded about the relationship between humans and animals without being cynical.

The movie I will watch again and again: The Rules of the Game. Each time you find new meanings for the word “civilization.” And it has one of the most elegant screenplays ever written, by Jean Renoir and Carl Koch.

The movie star I will see in anything: David Strathairn. I think he’s versatile and sexy—and he has a straightforward acting style.

The movie that stops me in my tracks when I’m channel surfing: Ordinary People. As cheesy as it is, it appeals to the guilty child in me. There’s a scene in the movie where Donald Sutherland says to Timothy Hutton—and I’m paraphrasing here—“I didn’t pay you much attention because I didn’t have to worry about you. You worried too much about yourself.” I was that child.

The movie that made me want to be a critic: Who Framed Roger Rabbit. I saw it just before I left my teaching job at the University of Washington to come to the L.A. Weekly as a film critic. It is so witty and full of Hollywood élan. It made me happy about the choice I’d made.

The first movie I fell in love with: Walt Disney’s Lady and the Tramp. It was the first movie I remember seeing in a theater—Brandt’s Sutter Theater on Sutter Avenue in Brooklyn. I was nine. I’d heard about movies, but I didn’t realize how much fun they could be.

The movie I will watch again and again: The Earrings of Madame de…, directed by Max Ophüls. It’s a great romantic story combined with some of the most dazzling camera work in film history.

The movie star I will see in anything: Clint Eastwood. He has the kind of screen presence that reminds me of the stars of the past.

The movie that stops me in my tracks when I’m channel surfing: The Godfather, parts I and II. These are the classic films where you say, “I’ll just watch a few minutes,” and you find yourself watching until the end.

The movie that made me want to be a critic: