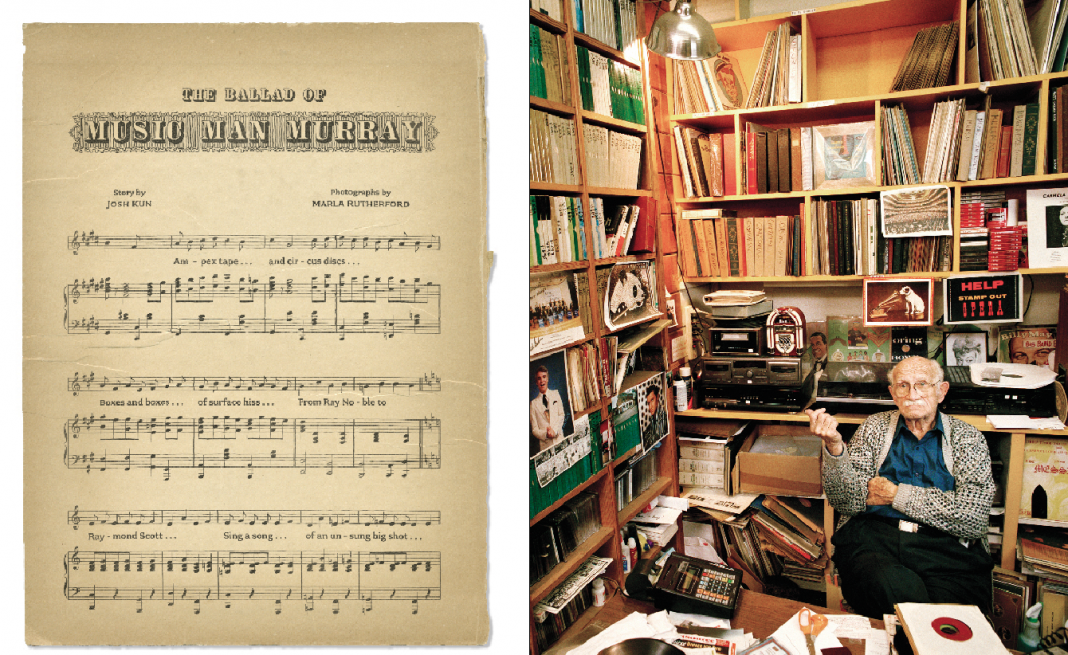 The wrinkled notes are stuck together with uneven strips of masking tape. Most are on different sizes of standard white paper, a few scribbled on scraps of faded pink. All are worn and handled. Technically, they are purchase receipts, but for Murray Gershenz, whose shaky handwriting (not the ink of a new laser printer or even an old adding machine) is all over them, they are clues to a mystery he is still trying to comprehend after nearly half a century of selling records to strangers.

He peels the receipts off one by one. A man in Houston bought the Tel Aviv String Quintet playing Brahms. Boise, Idaho, wanted Scott Joplin’s collected rags. Harry Owens and His Royal Hawaiians went to Mentor, Ohio; a Bill Bryant jazz album was sent to Cicero, New York, and Bobby Beers’s Cruising down the River, released in 1959 on the Liberty label, was shipped to South Korea.

“There is no pattern for it,” says Gershenz, fiddling with the cell phone he keeps clipped to his thin leather belt. “South Korea and Bobby Beers? You figure that one out. Is that preposterous? What makes people want what they want?”

Gershenz is 85, with a stout frame and thick, coarse fingers. Though his walk is more like a wobble, there is a spring in his step when he gets up from his squeaking chair to show off a photo of Jimmy Durante in Dumbo. He has the worn and gentle face of a veteran comic—an expressive forehead unencumbered by a hairline, twitchy lips that he puckers into punctuation marks, and eyes that work hard to make punch lines funnier than they are.

His cluttered desk is a miniature city of piles: towers of seven-inch 45 rpm records waiting for pickup from a regular customer, stacks of business cards (“Murray Gershenz: Big Shot”), assorted 12-inch LPs needing to be organized, and small mounds of stray index cards that are Gershenz’s primary means of keeping track of a music collection that consists of more than 300,000 titles. His daughter spends most days at the computer converting it all into a digital database, but so far only 11,000 are online (today she’s at work on the Ted Lewis Orchestra’s 1928-1932 and Patrick Gleeson’s “Star Wars”: Selections from the Film Performed on the World’s Most Advanced Synthesizer).

The rest are documented only on Gershenz’s index cards, which he keeps filed alphabetically in an old oak card catalog. It, too, is surrounded by piles. The piles are everywhere, crowding every inch of the wood-paneled front office of Gershenz’s store, Music Man Murray, a two-story audio warehouse hidden away on a washed-out industrial stretch of Exposition Boulevard. If record stores have become the endangered species of the digital age, then Music Man Murray is a dinosaur that has miraculously escaped extinction.

Beyond these doors, songs are measured in megabytes and stored by the thousands on hard drives smaller than a single 45 rpm disc. But here are CDs and cassettes, 78s and LPs, and above Gershenz’s desk, a wall lined with nothing but boxes of reel-to-reel tapes, each labeled with codes to remind him of the machines they were recorded on: V for “Viking,” RO for “Roberts,” and TAS for “Taped on Ampex in Stereo.”

That’s just his office. If you want to know what the future of music will not look like, take a tour of the store’s vaults, which begins with a moldy box overflowing with early-20th-century Edison cylinders that can only be played on their original cylinder machines. All are for sale, but the box has stayed full for years. Across the aisle are crates stuffed with jazz, classical, and opera LPs, and teetering up above are rows of vintage Victrola players and ’50s hi-fi units. Shelves are lined with binders full of 78s, each labeled in thick black marker on their spines, which are wrapped in silver electrical tape: vocal, shore, dinah, v-discs. In the back of the room, Gershenz has a bookcase dedicated to back issues of Phonolog, once the music industry’s version of a weekly books-in-print catalog.