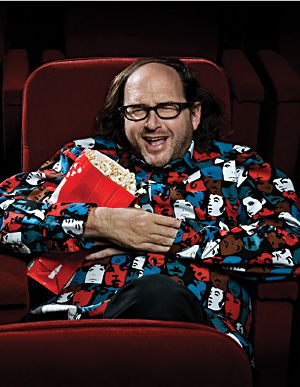 A year ago, after the Academy nominated No Country for Old Men as the best film of 2007, a lot of people were left wondering, “Well, OK—but what was the 59th best film of the year? Or the 136th? Or the 289th?” For anyone keeping tabs—and in Los Angeles the only person apparently doing so is a 46-year-old screenwriter, director, and obsessive named Daniel Waters—those winners, respectively, were The Darjeeling Limited, I Am Legend, and The Number 23, the last of which starred Jim Carrey. If you recall the film, things kept creepily adding up to the number 23. Not so, however, on Waters’s list, where the cinematic charms of Romance & Cigarettes landed it safely at—you guessed it—the number 23, beating out by a hair Michael Clayton, the 24th best film of 2007, according to Waters.

THAT TUESDAY AFTERNOON, as Jim Leon steered his red Nissan Maxima into his windswept Lancaster neighborhood, he sighed in relief. No government vehicles were parked in front of his beige clapboard-and-flagstone house. Which meant there was no bad news from Iraq, where his 20-year-old son, Marine Corps corporal Christopher Leon, was serving in Ramadi, one of the country’s most violent cities. During the four months since Chris deployed, this had become Jim’s ritual. Because his job as a lab technician at Quest Diagnostics in Tarzana required him to be at work by 6:30 a.m., he always arrived home early. If anything was wrong, he would at least find out before his wife, Kathi, who kept normal business hours in the billing office of an Antelope Valley urologist.

In all, Waters watched and rated 310 films that year—311, if you count a five-minute short by director Alexander Payne, in Paris, je t’aime, that Waters called a “Once in a Blue Moon Masterpiece.” This placed it 17 slots ahead of No Country for Old Men. Waters has been rigorously watching and ranking films since, as a teenager living in South Bend, Indiana, he picked National Lampoon’s Animal House as the best film of 1978. “Totally embarrassing now,” says Waters, who is pale and as tall as an NBA player, his lanky brown hair tucked behind thick-framed rectangular glasses. “Especially when you realize that Days of Heaven came out the same year.” His viewing habits are not exhaustive; some films pass through the cineplex without Waters’s attention. For instance, he avoids like the plague sequels of movies he hated, meaning you didn’t catch him watching Big Momma’s House 2. Still, as the numbers for 2008 are being crunched, Waters is once again on track to calibrate nearly 300 film releases. Already, a few winners and losers stand out. Charlie Kaufman’s Synecdoche, New York has handily swept Waters’s annual “Blue Moon Masterpiece” category, while the teen flick College—even allowing for its tag line “Best. Weekend. Ever.”—is Waters’s worst-ranked movie. “Just grueling,” he says with a grimace. “I’d sooner watch a family member die before seeing that again.”

Waters’s filmgoing habits are astounding for any number of reasons, the first being that the screenwriter, who lives in Hollywood in the house Orson Welles died in, does not drive. He rides the bus. “I’m lucky in that I’m in a perfect-storm bus neighborhood,” he says. He will see a new movie in just about any theater by a bus line, though the Directors Guild remains his favorite (“Great projector, great sound, no stadium seating”), and the Beverly Center is his last-ditch choice (“It’s worse than even the Fairfax Three”). Anyone who sees more than 300 movies a year would seem to have time on their hands, but Waters has worked steadily since he moved to L.A. in the late ’80s. Films he has either written or directed are rated best to worst—by Waters—as follows: Heathers, Sex and Death 101, Batman Returns, Demolition Man, Happy Campers, Hudson Hawk, and last, The Adventures of Ford Fairlane. Like a lot of moviegoers, Waters relies on a 1-to-10 rating system when classifying what he sees, though he takes the practice a step further by systematically describing a 9, like The Dark Knight, as “Truly Excellent,” or a 3, like Star Wars: The Clone Wars, as “Painfully Mediocre.”

Waters employs multiple criteria when rating films, most too complex and personal to easily explain. Here, though, are a few rules of thumb. He is a firm supporter of the sleep tax: “If I fall asleep more than five minutes in a movie, then it’s bound to be painful.” He subscribes to the adage that an audience will forgive a film’s first 15 minutes but never the last 15: “That’s why I thought The Heartbreak Kid, with Ben Stiller, which is insufferable, was better than Color Me Kubrick, with John Malkovich—it had a great last 15 minutes.” He’s allergic to perfection: “Wall-E is a perfect film, like a perfect girl. But I ranked Speed Racer higher because it’s a spectacular mess, like a date whom you have amazing sex with because she’s just as messed up as you are.”