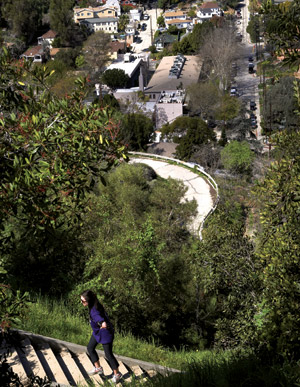 This section of Echo Park used to be so loaded with Left-brained folks like Woody Guthrie and Nation editor Carey McWilliams that it was called Red Hill. To follow in their footsteps, walk north on Echo Park Avenue and make a right on Avalon Street, which leads to a steep, narrow set of steps laden with switchbacks. At the top walk to Avon Street and turn left. Then go left again onto Park Drive, with its views of Elysian Park and downtown. Walk a block to Ewing Street and make a left, then a right on Avon Street. On the other side of a rise you’ll find the mighty Baxter Steps—the area’s tallest—on your right. Once you’ve conquered them and recovered from the view, go left onto Park again, which changes to Avon Park Terrace and descends. Go left onto Avon, then right onto Baxter Street. The second left will put you back on Echo Park.