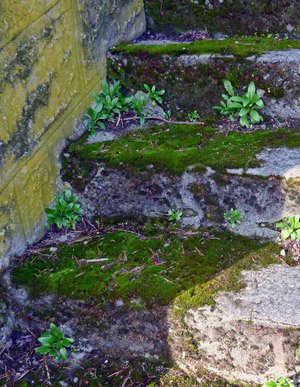 |»In the early 1900s, the top of Mount Washington had a massive hotel, reached by a funicular railway. Walk uphill from Marmion Way and Avenue 43 to the stairs. The road ahead follows the funicular’s former path. At the peak is the hotel—home to the Self-Realization Fellowship since 1925.

»In 1932, Stan Laurel and Oliver Hardy were filmed carrying a piano up several flights of stairs off Vendome Street, just south of Sunset Boulevard in Silver Lake. Now the climb is known as “The Music Box Steps,” in honor of the short movie they made.

»Happy Valley near El Sereno is lined with stairways. For photo-worthy views of downtown, climb the Pyrites Street Steps from Tourmaline Street to West Rose Hill, then walk up to the peak.

»Angels Flight, the funicular across from downtown’s Grand Central Market, is defunct for now, but you can ascend the adjacent staircase on Bunker Hill to the California Plaza water garden.

»The Pacific Palisades canyon below Sullivan Fire Road once contained a private compound for local Nazis. Now part of the park system, its 512-step staircase, though not built for the public, is the city’s largest.