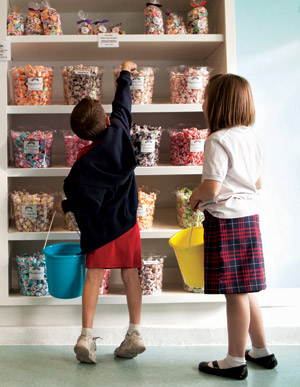 Framed by the San Gabriel and the Verdugo mountains, Montrose could almost pass for isolated, if downtown L.A.’s jagged skyline weren’t visible in the middle distance. La Crescenta and outer Glendale blur the edges of the neighborhood, so set the GPS for where Ocean View Boulevard crosses Honolulu Avenue, a long, gently curving stretch lined with tidy rows of independent businesses. This is Eisenhower suburbia, a place where you can find not one but two vacuum repair shops within a couple blocks of each other. Visit on a Sunday for the Harvest Market, when vendors set up stalls to hawk produce and crafts. For breakfast, try getting a table at City Hall Coffee Shop, a no-nonsense diner with pennant-splattered walls and a legion of fans. If you’ve got little ones in tow, load up afterward on bribes at the Montrose Candy Company and walk down to Once Upon a Time, billed as the oldest children’s bookstore in the United States. Across the street, Andersen’s Pet Shop is clean and perky and bound to have something you’ll want to bring home (dog treats? bird feeder? live crickets?). Billy’s Boardshop injects a smidgen of rebelliousness into the mix with its supply of planks on which to propel yourself over pavement, snow, and sea. The deco building nearby houses the Montrose Bowl (alas, it’s limited to private parties). Come nightfall, the cool kids on the block are Three Drunken Goats (think tapas) and the Fat Dog, a gastro pub. Or skip south of the main drag to Bashan, where chef Nadav Bashan (a Providence alum) is especially skilled with seafood. For lunch, though, keep things simple with burgers at the faux-’50s Rocky Cola Café, Texas-style brisket at Zeke’s Smokehouse, or maybe Vietnamese noodles at Pho 22. A short distance away on Verdugo Road, the German delicatessen Schreiner’s Fine Sausages can outfit you with all the smoked meats, jerky, knockwurst, and blood tongue your meat tooth desires. Whatever you do, hold off on dessert until you make your way back to the other side of Ocean View. Paradis makes its ice cream (using milk to keep fat in check) and sorbet daily (see sidebar). Still have time to spare? Take a longer route home; less than two miles away in La Cañada you can wander the camellia forest, ogle the Japanese teahouse, and ride the dinky train at Descanso Gardens. Morten Thorup: Why I Love it Here The Atmosphere
When my wife and I decided we wanted to open Paradis, we saw hundreds of places. We live downtown, and our neighbor told us about Montrose. We drove up here and just fell in love. It reminded us a little of the town we’re from in Denmark—the trees, the streetlamps, and everybody walking.

The Pace
It’s a pedestrian-friendly street. We like to talk to people about the ice cream so they know what they’re getting. We couldn’t do that if they were rushing in and out of their cars.

The Traditions
There’s always something going on: the Christmas parade, Halloween, Oktoberfest.

The Geography
Some people say Montrose feels isolated, but I don’t think it does. People come from all over  L.A. to be here.