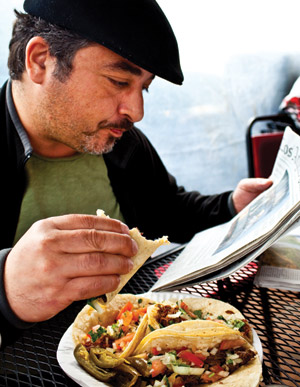 Nestled against stately Griffith Park (see sidebar) and studded with tour de force residential architecture, Los Feliz has attracted generations of musicians, artists, and writers without ever descending into a long period of urban grit usually so essential for establishing a bohemian L.A. enclave. In the early ’90s, Beck sang for his lattes at the bygone Onyx coffeehouse and Vince Vaughn honed his Swingers persona at the Derby. Today the neighborhood’s commercial stretches are almost uniformly upmarket. Start out on Hillhurst Avenue, where you can sample a shrimp and lobster omelette or curried tofu Benedict at the Alcove Café or a wild boar and Parmesan frittata at Little Dom’s. Drift south to Hollywood Boulevard. Just after the bend you’ll find the gift emporium Soap Plant/Wacko, which is also home to the kitschy La Luz De Jesus Gallery. A few doors down you can flip through the LPs at Vacation Vinyl before proceeding to Uncle Jer’s for its artisan jewelry and shawls. Retrace your steps on Hollywood to the Barnsdall Art Park and take a  tour of Hollyhock House, Frank Lloyd Wright’s earliest expression of the Southern California lifestyle. After a quick bite at Yuca’s taco stand (carne asada is the signature dish), stroll east from Hillhurst over the Franklin Avenue Bridge, also known as “the Shakespeare Bridge” for its vaguely Elizabethan turrets. From there you can explore the neighborhood of quaint cottages and Spanish homes. Flip through the selection at Skylight Books, or take in an afternoon movie at the Vista, a single-screen theater from 1923 that recalls Egypt circa King Tut. At Umami Burger, wash down your Stilton burger with a stout beer float. You’ll find a broader menu at Vermont, where it’s not hard to linger over Muscovy duck or blackened mahimahi. For counterintuitive entertainment, the bill at the Steve Allen Theater might be a variety hour, a Mamet play, or a live dating game. Nightlife is booming here. The Agave Tequila House y Cantina is a relative newcomer. Two classic bars that rarely disappoint are the hole-in-the-wall Tiki Ti  near the Vista and the Dresden on Vermont, where lounge singers Marty and Elayne are still at it after 28 years. Urban Cowpokes
To satisfy young hankerings for the Wild West, head to Travel Town and ride a tiny train, then mount a gentle steed at the pony rides.

What a Gas
Hit the Griffith Observatory to find out all you need to know about our galaxy. Free admission means you can return again and again once you realize you’ve forgotten 90 percent of what you’ve learned.

Tasty Shack
Grab some vegan chili or a blueberry oat scone at the Trails Café, the only park concession stand in the country vying for a James Beard Award.

Git Along
Spend a quality hour at the Autry National Center, a museum that chronicles the history of our western frontier with so much acuity and so little bombast, you’d never know it was launched by the greatest of the singing cowboys.