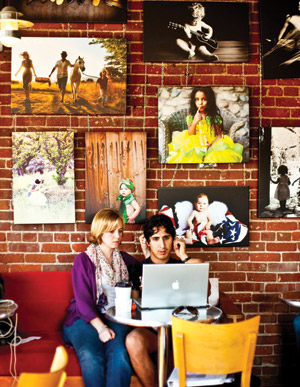 The prospect of more square feet for your buck has driven hipsters (and their hipster babies) to Eagle Rock, a sleepy hamlet of hilly streets and old homes that is sandwiched between Glendale and Pasadena. Founded in 1911, Eagle Rock became part of L.A. only after the need for water forced it to incorporate years later. There’s still an air of independence here, where new boutiques, French cafés, and wine bars have coalesced gracefully with the car repair shops and burger joints that line Colorado and Eagle Rock boulevards. Start your morning with brunch at Auntie Em’s Kitchen (Bobby Flay did a throwdown with its cupcakes) or Camilo’s (famed for the bread pudding French toast). Work off the calories with a stroll across the campus of Occidental College, which is so picturesque, it stands in as an idyllic university in movies and on TV (and, oh yeah, President Obama studied there). Eagle Rock has become a cheap foodie’s paradise. Take your pick of the döner kebabs and falafel at Spitz, the tacos and quesadillas at Señor Fish, the pulled-pork sandwich (or anything else on the menu) at The Oinkster, or the French dips and subs at Dave’s Chillin-N-Grillin and you won’t go wrong at lunch. Along Eagle Rock Boulevard, stop in at Twerps (cute kids’ boutique), Toros (ceramic goods are made in back), or IMIX (a bookstore with Latin American lit and cool art). Grab some caffeine to go at the local-hub coffeehouse, Swork, and then cruise down Hill Drive, which runs parallel to Colorado (just north) and offers a glance at Eagle Rock’s nicest homes. For dinner try the peppercorn steak at Cafe Beaujolais (those waiters aren’t faking the accent), the okra and onion rings at Larkin’s (in a converted bungalow), or the pizza pies at Casa Bianca, which has been in the neighborhood for 55 years (see sidebar). Want a nightcap? Go loud and young at the Black Boar, sophisticated and friendly at the Colorado Wine Company, or old school and unpredictable (there’s a raucous piano bar) at Colombo’s, where the bartenders pour one hell of a drink. R-E-S-P-E-C-T
The restaurant consistently wins honors (including from us) for having the finest pizza in L.A. The only other contender for delicious pies in recent years is Pizzeria Mozza, and on a per-ounce basis, its pies will set you back three times what Casa Bianca’s will.

Famous Fans
Jay Leno, David Hasselhoff, and at least 90 other, um, luminaries have waited in line, as the entryway encrusted with signed head shots dating from the early ’60s attests.

Retro Fit
The place has red-checked tablecloths, Naugahyde booths, and hanging lamps that would look at home above a poker table.

Straight Talk
You can gather realistic dialogue for your next screenplay by eavesdropping on the chatter of amped-up Occidental College jocks, moms on a night out, and food bloggers inching forward in line.

To Die For
The fried eggplant and handmade sausage toppings should be on your bucket list.