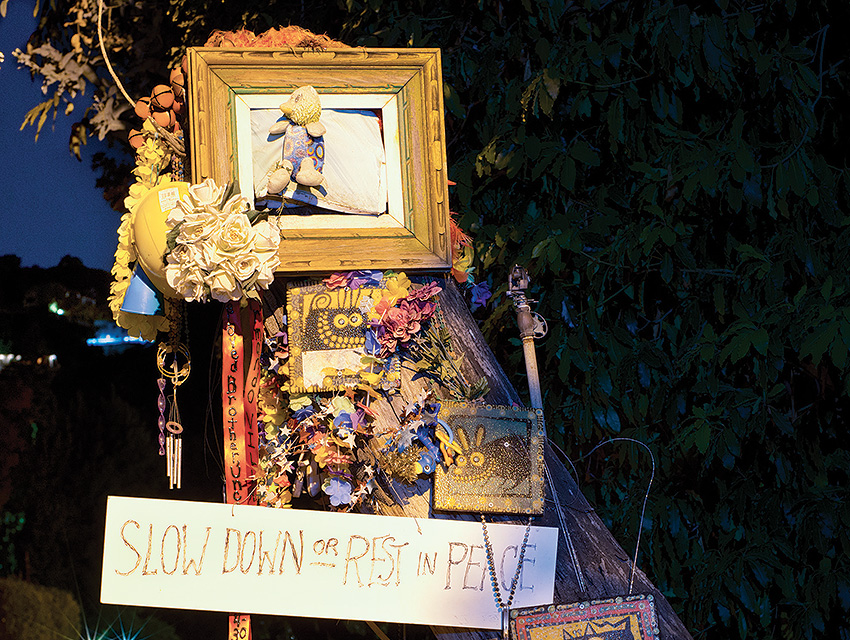 Share
Email
Facebook
Twitter
Pinterest
ReddIt
Sandy: Our neighbor told us our acacia tree out front would catch fire if someone threw a cigarette out of their car. We’d just seen a Japanese art exhibit that talked about how each piece of wood has its own spirit. So when we cut the tree down in 2005, we asked our gardener to leave a stump nine feet tall.

Ed: It started as an art piece. I am a sculptor and a photographer, and everything here in our home and yard relates to art.

Sandy: The first thing we put up were Sylvie Blum’s shoes. She’s a wonderful artist, and she was Helmut Newton’s muse. I told her I wanted a pair of her shoes, and she gave us a white pair. They are still up there, on the west side of the tree. Then the daughter of a neighbor made us a frame with a valentine in it. Then we went to a block party, and we met an artist named Glenn Fox. A few days later he comes to the gate and says, “How do you feel about black cats?”—just as our black cat walked by! So Glenn put cat paintings up on the tree. Then we put up Easter decorations. A friend said, “OK, where’s the matzo?” Someone had left all these wicker baskets at the tree, so we started stocking them with matzo. We do it all year-round now, so anyone who’s hungry in the neighborhood has something to eat. One day we stopped at a kid’s lemonade stand. “We’re the people with the tree,” I said. “Oh, the holiday tree,” the kid said. “On our way to school my mother and I put up a wreath.”  After that, we started putting up decorations from the 99 Cents Only Store for Halloween, Thanksgiving, New Year’s Eve. Then about four years ago we were walking down our driveway, and there’s a couple in a convertible. He looked very classy. She looked good: dangly earrings, a turban. The guy said, “Hey, we pass by here all the time when we take our Sunday drive. We want to know about the tree.” I said, “It’s an art tree. If you have anything you want to donate, leave it at the gate and we’ll put it up.” He said, “Well, this is my wife, Esther Williams.” That was phenomenal. When Michael Jackson died, Ed put up a drawing of him with a top hat and tears coming down his face. Then the tsunami hit Japan. I went and bought some big yellow poster boards, and I called my friend Yosh and asked him to come over. We put up a sign that Yosh wrote in Japanese and English: “Japan, Hang in there!” A few days later we see this Japanese girl in front of the tree, with somebody taking her picture. She said, “My parents back in Japan think Americans have no idea what’s going on. I wanted to show that the people in America care.” After that, many Japanese people stopped by. Then last October we began to hear a motorcycle go by—fast!—every afternoon at about the same time. He’d speed by one way on his purple Ducati, and then a few minutes later back the other way. Sometimes he’d go slowly if he was stuck behind a car, and we’d wave, and he’d wave back. He was a nice guy. He was just going too fast.

Ed: I would say, “That guy’s going to lose control and hurt himself.”

Sandy: So we called our neighborhood LAPD officer, Ralph Sanchez, and he came and parked in our driveway with the motor running. He chased the motorcycle twice but couldn’t catch him. Then on April 20 the motorcyclist was driving by our house again, and he lost control, hit a tree on the other side of the street, and died. Armando Villanueva. The day after the accident we went out to get the mail, and there was his whole family. They’d brought flowers. We put up a cross. About a month later there were fresh white flowers and red streamers with lettering that said, “Beloved Brother, Uncle and Love.” Villanueva’s girlfriend had put them up.

Ed: I made a big sign to put on the tree: “Slow Down or Rest in Peace.”

Sandy: Villanueva kind of threw us for a loop. Just the fact that we knew it was going to happen, and it happened. Since he died, we haven’t added much to the tree. I have a piece of his Ducati that I’m going to hang, but it hasn’t felt right. But now comes Halloween, and the kids in the neighborhood will be coming by and dropping stuff off. That’ll pull us out of it. Our tree is part of the community. It has a life of its own.

ALSO: See our November 2012 feature on local shrines, “Where the Sidewalk Ends.”