Home Crime Saint of the Hood 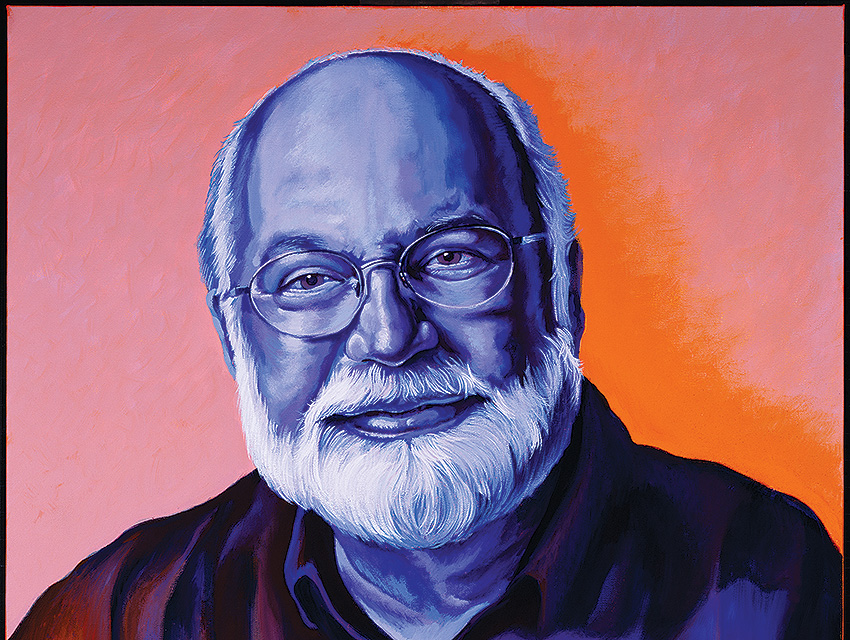 The walls of Father Gregory Boyle’s office at Homeboy Industries are encrusted with family photos. Somewhere there’s a snapshot of his 88-year-old mother, Kay, though she’s all but lost among the scores of young men with shaved heads and gang tattoos. The Jesuit priest has welcomed generations of these gang members like prodigal sons into Homeboy, which he launched 25 years ago and has built into the most successful gang rehabilitation and reentry program in the world. Many of the men pictured underwent months of paid job training and therapy and laser removal of those tattoos, emerging as wage earners and committed parents. Others slipped back onto the streets or are serving prison time, or are among the 186 murder victims whom Boyle has buried. Staring out from their snapshots, they bear witness on this late winter morning to a little boy who grins and dances before Boyle’s desk, his parents slumped nearby in plastic chairs.

“You tested dirty?” Boyle asks Roberto, the boy’s 23-year-old dad. His eyebrows rise up on his reddened forehead. “Again?” A gang member at 13, Roberto was locked up as a teen before serving a year in jail. He has three children. He used to work at the Homeboy gift store, selling Homeboy baby onesies, Homegirl sweatpants, and signature tortilla warmers and travel mugs. By testing positive for marijuana in a drug screening, Roberto violated one of the few Homeboy employment rules that resemble those of the outside world—and was let go. Yesterday he sent Boyle a text message bordering on despair. His mother is moving to a small apartment at the end of the month, and he’ll have to find a new place to live. He has no money, no job prospects.

“The THC,” Roberto says, trying to explain the test results. “It was at a low level, Padre.”

“How do you know it’s at a low level?” Boyle asks.

“Because Cesar told me.” Cesar Ulloa is one of the senior Homeboy staffers who administers the tests.

Latino, African American, or Asian American, in their teens or well into middle age, about 40 gang members crowd the lobby, awaiting an audience with the priest. Like a benign Don Corleone, Boyle spends his a.m. hours being hit up for favors—trainee jobs or emergency handouts, legal assistance, help with regaining custody of kids from the foster system. A few of the supplicants end up sobbing on his shoulder. It’s been this way since Homeboy moved from a Boyle Heights storefront six years ago to its postmodern headquarters at the center of Chinatown, two county jails within a mile’s reach.

The carved block letters on Boyle’s wood business card holder identify him as “G Dog.” Homies who’ve known him for years call him by that name or by “Father G” or simply “G.” To those who’ve met him more recently, he’s “Pops.” Boyle is 59 but looks at least a decade older. His beard is snow white and his bald dome ruddy. As a young, slender priest, he spent his nights pedaling around the region’s most violent housing projects on a Schwinn beach cruiser. Now his ride is a ten-year-old tan Toyota Corolla, he’s sedentary much of the day, and his frame is weighed down by a sizable paunch. Boyle sports the same shapeless, faded Tommy Bahama zip-up sweater he’s worn every day since the weather grew cold. He gives away the new clothes his mother and siblings buy him for Christmas. The plaques he receives at awards dinners and the knickknacks he gets from friends are regifted to homies. The exception is single malt scotch—that he keeps.

Boyle rises at 4:30 each morning in his room at a Jesuit-owned Craftsman bungalow in East L.A. for an hour of prayer and meditation. The rest of his waking hours belong to potential funders, to out-of-state gang intervention directors interested in Homeboy, to any homie who walks through the door. Weekends are for celebrating Mass and counseling detainees at youth probation camps, for baptisms, weddings, and quinceañeras, and for answering ex-gang members’ distress calls. Thursday is supposed to be his day off but rarely is. He spends at least a hundred days of the year away on speaking tours.

Those who love and depend on Boyle—from Homeboy’s senior staff members to directors of charitable foundations to his mother—have made scant progress persuading him to take better care of himself. They also worry about who could possibly replace him. In 2003, Boyle learned he had chronic lymphocytic leukemia. He was told that the prognosis for men in his age bracket meant another ten years to live. After four months of chemotherapy and four years of immunoglobulin infusions to boost his immune system, the priest’s cancer went into remission. His schedule resumed full force. Late last year a spot on Boyle’s nose tested positive for lymphocytosis, but his blood levels have remained favorable and his doctors advised that more chemo was unnecessary. “Honestly,” he says about his disease, “I don’t think about it even a little bit—ever.”

He does worry about Homeboy’s financial condition, which has drastically reduced the chances that a job applicant in the nonprofit’s weekly lottery will end up working there. Nonetheless, hope is what Roberto needs at this moment, and Boyle’s not about to withhold it from him—dirty drug results or no. Looking at the couple, Boyle brightens. “We don’t know if you tested ‘low,’ ” he tells Roberto. “Well, maybe it’s light! Maybe it appears light.”

“I had a whole month with not smoking, Pops,” Roberto says. “You know I’m trying real hard.”

Boyle grabs a pad and starts scribbling. “OK, being that it’s lighter, here’s what I’m going to do. I’m going to give you permission to go to the lottery this Friday.” He tears off the sheet and hands it to Roberto, then crouches at eye level with the boy, who laughs and reaches for the priest’s beard. “Yeah,” Boyle says, “Santa Claus! Santa Claus!”

“Son,” Boyle tells Roberto, “here’s the words I don’t like—‘I give up.’ So when you text me like you did yesterday and say, ‘I’m going to give up,’ I understand the stress. But you can’t give up because”—he gives the boy another jolly Saint Nick smile—“look at this guy.”