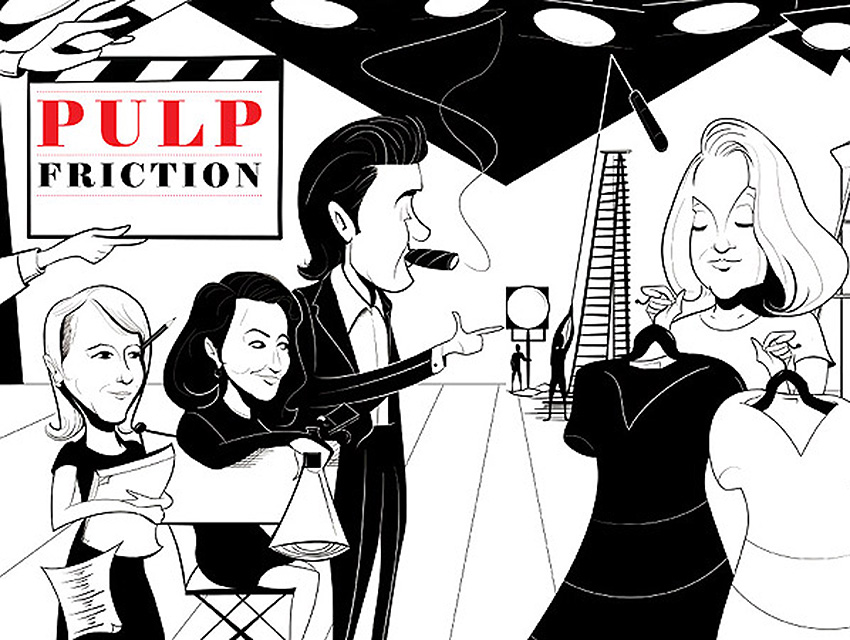 Remember how simple it used to be to stay informed? People in the entertainment business do. Every weekday morning Variety and The Hollywood Reporter—the trade papers that had been around since 1905 and 1930, respectively—would arrive, their glossy pages packed with the trends and tidbits that kept the industry on its toes. Box office would be tallied. Upcoming slates, both big screen and small, would be announced. If your pilot got picked up, the trades were where you trumpeted it. If your movie tanked or was put in turnaround, they were where your rivals found out about it. The duality of the journalistic landscape—just two trades, both battling for scoops—made for competition, yes, but also for a relative civility. Then everything changed. And I mean everything.

Have you ever seen a New York Times Pentagon correspondent publish a scathing indictment of the military reporter for, say, The Washington Post? No, you haven’t, but not just because it would be rude or unseemly. Journalists who compete on matters of importance don’t tend to call one another out in print because, ahem, it isn’t news. But these days in Hollywood, a quartet of trades—two in print and all four online—are fighting daily over advertising dollars and who got which story first.

There is name-calling and trash-talking. There are threats and ultimatums. Increasingly the journalists have become the story, and none more so than Nikki Finke, the founder of Deadline.com—the Web site that, for better or worse, upended the status quo.

Oh, he remembers, Nikki. How could he forget?

This is the story of how two once-thriving trade papers became the showbiz equivalent of Pravda and Izvestia, sclerotic mouthpieces for the studio party line: outdated, rigid, stuck in their ways. It is the story of the woman, Finke, who bested them, at least for a while, and who forced them to reinvent themselves. It is the story of how Finke’s site prompted a copycat site, TheWrap.com, and how that start-up’s founder, Sharon Waxman, tried to muscle her way into prominence. It is a story about an ongoing contest between dead-tree media and the kind that gets traffic. But at its core, this is a story about journalism in trouble. Because while it may seem difficult at first to ignore media outlets that regularly call one another pieces of crap, it gets easier day by day.

The news, if you can call it that, broke at 8 a.m. this past Labor Day. After months of speculation, an actress had been chosen to play lusty Anastasia Steele in Universal Pictures’ adaptation of the best-selling erotic thriller Fifty Shades of Grey. The casting of Dakota Johnson, the daughter of Don Johnson and Melanie Griffith, was the kind of scoop that the Big Four trades (Deadline, The Wrap, Variety, and The Hollywood Reporter, which goes by the acronym THR) would have killed for. But it was not to be, since the book’s writer, EL James, had just revealed the casting choice herself on Twitter.

Within moments everyone in today’s zero-attention-span media scrambled to post the news, hoping to get a bump in Web site traffic. Stories about casting—a form of journalistic name-dropping—have been a staple since Variety was founded. But today, because they are the biggest drivers of traffic, they dominate as never before. Given that James had alerted her more than 358,000 Twitter followers, you would think it impossible for any journalist to claim bragging rights on the Fifty Shades news break. Still, one did: Mike Fleming, Deadline’s veteran movie writer, who topped his story with the label “Exclusive.”

Jeff Sneider, a dogged 29-year-old reporter at The Wrap whose job is devoted to landing casting scoops, took James’s revelation especially hard. If anyone embodies the antic metabolism of the new entertainment journalism, it’s him. He’s been fired twice by Variety and accused of harassment by Finke. He makes a habit of oversharing on Twitter, where he once melodramatically tweeted, after losing a different scoop, that he was “gonna go drive my car into a tree. My blood will be on Hollywood’s hands”—an outburst that led to the second of his Variety departures.

A Boston native who evokes a digital-age Sammy Glick (as played by Seth Rogen), Sneider had grounds to be unhappy about the Fifty Shades disclosure. Days earlier he’d written a story saying Johnson had the part, only to have his editors refuse to post it, questioning his sourcing. Now that he’d been proved right, Sneider expressed his chagrin in 140 characters or less: “Should I write I FUCKING CALLED IT in sand on the beach?” More expressions of anguish followed, and they did not go unnoticed.

“Rather than worry about EXCLUSIVES or FIRSTS why not focus on the story??” one of Sneider’s 10,000 followers tweeted. Only it wasn’t some featherweight fanboy. It was Fifty Shades producer Dana Brunetti. “Your ridiculous desire to be 1st is annoying,” the producer wrote, adding, “If you knew, then why not have a IN DEPTH article ready to go?? Isn’t that what reporting and journalism is? Not FIRST!”

Janice Min and Richard Rushfield Team Up for Ankler Expansion