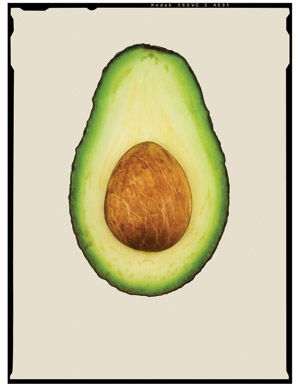 The orange and lemon lobbies might argue otherwise, but the avocado is L.A.’s fruit. As far back as the 1800s, Angelenos were intrigued by a “pear” coming in from Mexico that had a flavor like butter with a nutty bite and a light lick of honey. The skin—a reflective green that shone coppery purple with age—grated like pebbles, but the flesh was seductively smooth, holding the promise of a tropical trade wind. Before long, groves dotted L.A. soil, and by the 1920s, an avocado cooperative in La Habra was touting the fruit in ads in Vogue.

Today the avocado’s sovereign is the Hass, named for the postal carrier who, in 1926, planted a seedling in La Habra Heights that yielded a fruit tastier than the popular Fuerte. More important, the Hass, once picked, was unaffected by the rigors of refrigeration and handling. By the 1970s, the Hass dominated the global market; by the 1990s, the L.A. native owned it. Still, Southern California’s temperate climate encouraged hobbyists and scientists to forge ahead for new and better fruit. Avocado connoisseurs can recite the properties of the Reed, Pinkerton, Hellen, Mexicola, Gwen, Puebla, Nabal, Bacon, Zutano, and Jan Boyce, among the nearly 500 varieties in existence.

In California, the avocado is now a quarter-billion-dollar industry. The image makers at the state Avocado Commission are ever conscious of the fruit’s place in modern times. The 2007 “California Avocado Irresistible Challenge,” with an interactive game and a Prius as prize, evolved into last year’s “Hand Grown in California,” a reminder of what buying local means for jobs, carbon footprints, and eating quality. No matter the cultural message, the fruit will always be a source of mono- and polyunsaturated “good” fats, its high lutein content a boon for eyesight.

LA.’s first commercial avocado operation was planted at Henry Huntington’s San Marino estate in 1906. It’s not, of course, where you would go to see avocado farming today. For that you’d head to Fallbrook to the south or Carpinteria to the north, or Ventura County way. At the Berry-Horton ranch in Carpinteria, owned by the same family since Abraham Lincoln’s time, the land flows from a flat plain into the hills. The trees on the hillsides, only a few years old, sit like dark green hoopskirts. Around them is knee-high grass with a sprinkling of native flowers. Farm manager Carl Stucky has forgone the traditional weed clearance, primarily to prevent erosion and topsoil loss and partly to attract beneficial insects like ladybugs. The soil is not as rich as on the flats, where the trees are giants. Some are close to a half century old. In their midst looms a 50-horsepower wind machine. Freezing air is the grim reaper of avocado farming. Stucky likens the air’s movement to a river: It pools on the plain, held in place by a ceiling of warm air. To save the trees, the tilted blades of the wind machine pull down warmth from above. One freeze decimated crops in 1990, another in 2007. Numerous digital tools exist to warn the farmer of danger—killer freezes occur when there’s no moisture. But Stucky’s just as inclined to walk outside in the evening, running his hand across the grass to feel for wetness, letting his skin inform him of the air’s dryness.

Once conceived, avocados normally stay on the tree 12 to 16 months to foster the oil buildup that gives the fruit its flavor. State regulations require that avocados at harvest be at least 20.8 percent dry weight, a fi gure that correlates roughly to 8 percent oil. Late summer and early fall harvests can produce fruit with 20 percent oil. At the Berry-Horton ranch, Stucky will let a couple of the trees go unpicked until their fruit far exceeds that. He calls them the “estate reserve.” One night I went to his low, square farmhouse, awash in an electric glow while the rest of the place—tractors, fields, clusters of trees—was visible only by what light Orion and the Seven Sisters were throwing down from the sky. Waiting for me was a bag of 20 late-harvest avocados, fruit that had hung so long on the tree that it was more than 30 percent oil. Days later I peeled one and marveled at the unblemished flesh; only two pairs of hands had touched this avocado. The flavor was cashews dipped in cream—with an essence I suspected was rooted in a grassy Carpinteria field basking in a Pacific-lulled sun