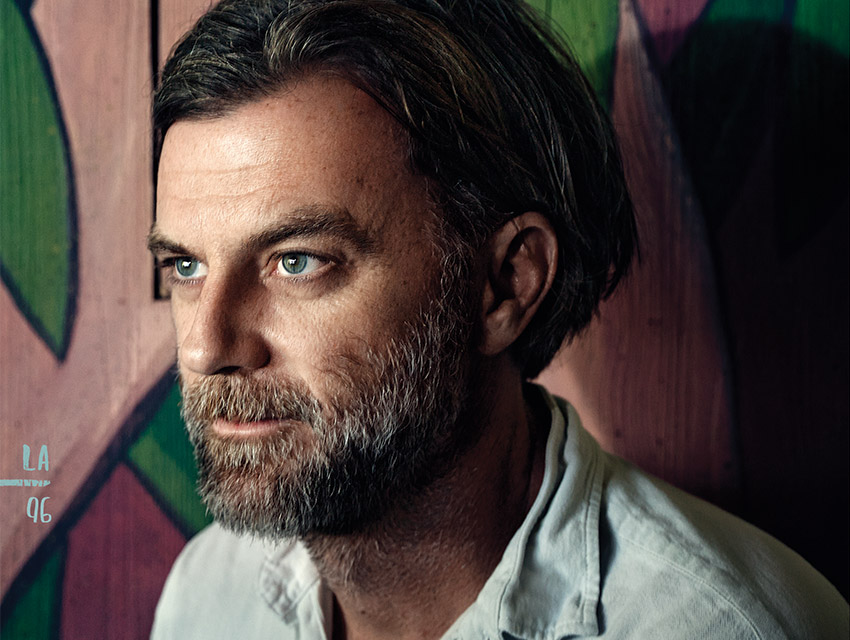 High in Trump Tower, in a suite overlooking Central Park, the best American director of his generation is on his knees. He’s not been driven low by the challenge of adapting Thomas Pynchon’s 2009 psychedelic novel, Inherent Vice, nor by despair at the response to the film. On the contrary, less than 24 hours ago he was in a Lincoln Center balcony box seat with a spotlight on him, triumphantly receiving the cheers of the New York Film Festival audience: “Saturday rain, bad news,” he quoted Pynchon from the stage moments before the premiere; but the rain cleared, and by the end the crowd was persuaded by the audacity of a movie more about vibe, zeitgeist, and non sequitur than storytelling convention.

Rather, Paul Thomas Anderson is on his knees, ready to light up as he tries to crack open the suite’s window that runs perilously from ceiling to floor. After graciously acceding to my request downstairs in the lobby for a place quieter than the park where he could smoke, he’s slightly fraught. “You’re sure you don’t mind?” he says, a still-unlit cigarette in hand. Personable and relentlessly considerate, though exhausted verging on haggard, Anderson is running on whatever fumes are available, including nicotine. At 44 he looks leaner and grayer since even last night. “Finished the movie a week ago,” he says of Inherent Vice’s two-and-a-half vertiginous hours of lysergic twists and turns, “and there were a million reasons not to do it, starting with, ‘This is too hard; I don’t want to screw this up.’ You know—insecurity,” a word that never comes up when anybody else talks about him.

Making challenging movies that are great more often than not may come to Anderson naturally. But now for the part that isn’t among the top 10, 100, or 1,000 reasons he does it: explaining himself.

“He’s so good.” Anderson is talking about Inherent Vice’s author, known for keeping a low, which is to say nonexistent, profile. The cigarette remains unsmoked; I’m not sure it ever got lit. “He finds that…line between making a point, and not making a point, and making you laugh in between—that’s just good writing.” Though by the end of the ’60s the sun would seem to have bleached all the dark out of whatever L.A. noir was left, Inherent Vice the movie, like the novel, opens with that most noir of setups: the entrance of the femme fatale, albeit in cutoffs and with no trace of lipstick, a sun-dappled flower goddess who frolicked through the reverie of just about any male in 1970 old enough to know what a libido was. In trouble, she reemerges out of the past to remind counterculture private eye “Doc” Sportello, played by Joaquin Phoenix, why he couldn’t forget her anyway before she vanishes again into a berserk narrative of scheming rich wives, depraved architects, coke-deranged dentists, police-sanctioned vigilantes, saxophone players who are government stoolies, prisons masquerading as swanky spas, brothels masquerading as dodgy real estate offices, and mysterious Chinese schooners masquerading as still more mysterious Chinese schooners.

Familiar hard-boiled motifs aside, Inherent Vice is a movie on its own terms, not unlike Stanley Kubrick’s Lolita or Philip Kaufman’s The Unbearable Lightness of Being, two other renditions of entirely different literary novels that seemed to defy translation. Anderson’s seventh and most riotous feature caps a body of work unmatched by any American filmmaker under 50. Of these seven at least two—1997’s Boogie Nights and 2007’s There Will Be Blood—vie for a place among the dozen best American movies of the past two decades; more than a few smart people would also argue for 1999’s Magnolia. Debate may rage over the others, but although any of Anderson’s films might reasonably be disliked by somebody of intelligence or taste, not one can be dismissed. Each is too singular. Each has been made for stakes too formidable, with an “unwavering adherence to [Anderson’s] specific standards along with a sacerdotal deference to the element of magical chance,” as put by avant-folk harpist and indie-music idol Joanna Newsom, who plays Doc’s steadfast right-hand woman. “He’s one of the only directors,” says Josh Brolin, Vice’s Cro-Magnon police detective, “Bigfoot” Bjornsen, “with a rare curiosity about why people tick the way they do.”

Anderson has created a Cinema of Outcasts, every picture concerned with the rites and desperations of clans not merely disenfranchised but scattered, beginning with the nocturnal Vegas strays of 1996’s Hard Eight and followed a year later by Boogie Nights, the predictably outrageous but also startlingly sweet, even innocent epic about the porn business. If Boogie Nights, Magnolia, and Punch-Drunk Love constitute a San Fernando Valley Trilogy—with their lonely people strung out across colorless coordinates marked “Sherman Way” and “Lankershim,” frantically scrambling to hang on to do-or-die dreams many would consider barely worth dreaming—subsequent pictures upped the ante as a triptych of California Madness, taking place in a debased past that made the suburbarama likes of the Valley possible. Turn-of-the-century There Will Be Blood leads to 2012’s postwar The Master, which leads to Inherent Vice’s anarchic-hippie End Days. Epitomizing this madness are money on the one hand and religion on the other, whether fundamental Christianity (Blood), nuclear-age cultism (The Master), or New Age mysticism co-opted and corrupted by the powerful (Inherent Vice). These outcasts are drawn to charismatic crackpots benign (Boogie Nights’ adult-film maestro, played by Burt Reynolds) and (in There Will Be Blood and The Master) ambiguous if not malevolent. Portrayed by Daniel Day-Lewis and the late Philip Seymour Hoffman, respectively, Blood  ’s wildcatter Daniel Plainview and Master  ’s sect leader Lancaster Dodd become more monstrous as they become more authoritative, until all they can feel, from even the very few for whom they care, is the threat of a world that wants to take them down.

Given the socially entropic nature of Pynchon’s story, the weak and powerful of Inherent Vice are outcasts alike. If anything, as embodied by Bigfoot, the powerful are at looser ends, with the filmmaker’s version of the cop more complexly crazy than the author’s. “There was a review of the novel,” says Anderson, “that said something like ‘Pynchon’s bat-shit compassion for America’s lost tribes’—that’s a nice line.” In Anderson’s movies these outcasts yearn feverishly to connect with other outcasts from the exile of their own psyches; children in particular, some still young and some overgrown, estranged or abandoned or abused, lurk in the shadows, until the shadows forsake them as well. If anyone touches Plainview’s heart, it’s the boy H.W., while the relationship between Dodd and his volatile disciple, Phoenix’s Freddie Quell, wavers between the paternal and the homoerotic. Bitterly at odds with his mother in Boogie Nights, Mark Wahlberg’s Dirk Diggler finds a new mother (as does Rollergirl, played by Heather Graham) in Julianne Moore’s Amber, who mourns the lost custody of her biological children. After taking John C. Reilly under his fatherly wing in Hard Eight, Philip Baker Hall seeks forgiveness for abusing his daughter in Magnolia, where William H. Macy’s former child game-show champion has been stranded in adulthood by parents who cheated him out of fortune, love, and self.

“Somebody would think I had this horrendous childhood,” jokes Anderson, a father of four, “but it’s funny how fast your mind goes dark if you’ve ever lost your kid in a department store for 30 seconds. When it comes to children, I…I just can’t see movies anymore where bad things happen to kids. You know, there should be a rule.” One of the few times in Inherent Vice that Doc emerges from a haze of weed to cast a moral judgment is when a small daughter has been deserted by her musician father, Coy (Owen Wilson), who may genuinely believe the girl is better off without him or may just be rationalizing his limited capacity for selflessness. Now, the sax player tells Doc, the daughter has the “little kid blues.” Anderson says, “Those three words were the reason to make the movie. Little Kid Blues. I remember reading and underlining that. No one deserves to go through life without seeing his daughter—you know, whatever mistake he’s made, whatever he’s into—but when Coy decides to extricate himself from this life, he just sits on the couch getting more fucked up, saying, ‘Well, I gotta do something, but let’s score one more time and then we’ll make it better.’ ”

Five days later and 3,000 miles away, the best American director of his generation holds his head in his hands. He isn’t despondent over the reviews that have been coming in since last weekend’s premiere; on the contrary, the notices are two-to-one good or better than good, with dissensions not so much negative as perplexed.

Sitting outdoors at Pat’s Grill in Topanga Canyon, with the passing autumn parade of professionals and artistes and bikers and aging hippies, he confronts a more daunting crisis: His oldest daughter’s ninth birthday is upon him. Intimidating as the pressures of a hotly anticipated film may be, any father knows that a nine-year-old’s birthday party is Defcon 1, and at the moment the filmmaker strategizes pretzels—where and how to secure them—while the interviewer across the table jabbers on about sociological subtexts of some movie that Anderson directed three children ago. The seventh of nine assorted full and half-siblings, Anderson lives with his kids and their mother, actress and Saturday Night Live alum Maya Rudolph, several towns over from where he was raised in Studio City, “that stretch of Ventura Boulevard still pretty close to how it was in the late ’40s,” he says. “There was always the feeling you lived in the Valley and not Los Angeles—the city was divided. Going to the doctor’s office, you went over the hill, as if to another city, another state entirely.”