Home Crime Of Sons and Guns 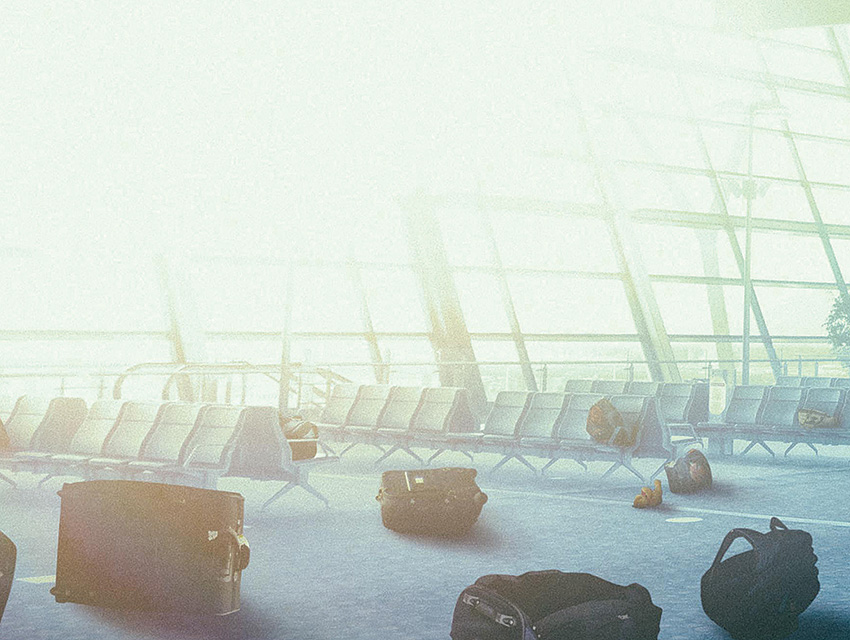 One: November 1. I had a feeling our 8:10 a.m. Virgin America flight would leave late that morning. If only it had left on time.

Two: We sat in the first two chairs at the bottom of the ramp leading from the TSA checkpoint. My 12-year-old son was relaxing to my left, playing a game on his phone as we waited by the gate. Soon we’d be en route to Philadelphia to visit his sister, a freshman in college.

Three: But we were in Terminal 3. And suddenly everything went out of order, and nothing added up. At first only a few passengers came tearing down the ramp from the TSA checkpoint at 9:25 a.m. My son and I glanced up, thinking they must be running late. And then a tidal wave of people came surging in our direction, suitcases in tow. For a moment I wondered whether an entire planeload was about to miss its connecting flight. No one thought to warn the rest of us waiting in our seats that we were in danger. When a group of women fled into the ladies’ room, shrieking, that’s when I knew: They weren’t running to something; they were running from something. An unthinkable security breach had occurred, and some unknown horror was headed toward us. Though I couldn’t hear gunshots over the din, I knew something was ready to manifest at any second. I jumped up and looked to my left for my son.

But the seat next to me was empty, and he was already gone. Time stopped as I remained rooted to my spot, scanning the crowd. In those frozen seconds it didn’t matter what hellish specter was about to appear. I was looking for only one small face, two animated hazel eyes, and a shock of auburn hair.

Then, just as quickly as he’d vanished, my son reappeared at my side. “Mom, we have to get out of here—now!” he yelled, pointing to the stairwell nearest the bottom of the ramp. The stairs were too close to the ramp where the gunman would appear, and I knew they held the potential for a stampede. And a place where a gunman could too easily pick off a large group of sitting ducks.

I took my son’s arm and warned him, “No matter what, don’t get separated from me.” I grabbed my purse and cell phone. To hell with our suitcases. I steered him away from the ramp—and away from the crush of people moving toward the stairs, his chosen escape route. I led him away from the ladies’ room, where women huddled, shaking. “We can’t panic,” I told him. “We need to listen to that still, small voice inside us telling us what to do.” I pulled him farther in, to the magazine stand near the windows. The shopkeeper ducked below her register, frantically dialing her phone. “What’s happening?” I demanded. “I don’t know, I don’t know!” she cried. A man called from an overhead stairwell, “Does anyone know how to get out of here?” We just stared at him.

We had zero idea whether what was advancing on us was a lone gunman or an orchestrated attempt to take over the airport. I called my husband on my cell phone. “Hey, something serious is going down at LAX. I need you to pray with us. And I need you to check CNN, to find out what’s going on.” My husband’s voice echoed what I’d been asking: “What’s happening?” I could only imagine the terror on his face as I told him I didn’t know.

My son began to tremble, pleading, “Mom, I just want to get out of here!” I told him, “It’s OK—if anything happens, we’ll duck behind this USA Today stand for cover.” And then—

Two shots rang out from the bottom of the ramp. Glass exploded. We dived for cover behind the newsstand. I kept the call connected to my husband so he would know what was happening to us, lowering the volume to avoid detection. “Don’t speak. Don’t move,” I whispered to my son. I shielded him as an eerie silence blanketed the terminal.

The gunman calmly strode around the gate area. He wore military khakis and what I later learned were five full 30-round magazines of ammunition—enough to terminate everyone in Terminal 3.

He stopped 40 feet away from us and yelled, “Fuck the TSA! ”

Three more rifle shots rang out, reverberating so loudly that my husband later said they sounded like explosions. I thought, “American. Antigovernment. At least I know what we’re dealing with now.” I still couldn’t tell if there was just one gunman or more.

Until you stare mortality in the face, you can’t know what you’re going to think. The heart pounds wildly. The mind races. I thought, “If I have to die, I know I’m going to heaven. But my son is too young to be robbed. He’s 12. Just 12.”

And then many voices shouting. For an achingly long minute it was difficult to discern whether the shouting emanated from more gunmen who had come to join their anti-TSA comrade or from LAPD officers. My son and I remained crouched, silently praying for God to keep us hidden.

At last I peered around the newsstand and glimpsed the police scrambling past in black uniforms. As we slowly stood up, one officer approached and asked if we were all right. We nodded and I reassured my shaken husband that we were safe. Then my son and I had the same question. We asked the police if they had checked the stairwell above us. Four officers crept upstairs. It wasn’t long before one yelled from the stairwell door that he’d found two injured people.

Ten: The news media reported that the entire incident took ten minutes from the time the gunman entered LAX until airport police apprehended him, shooting him once in the head, once in the leg. He took the life of a TSA agent named Gerardo Hernandez and wounded three others. A number of people also suffered injuries while fleeing the scene. I later checked with the Los Angeles Times, the LAPD, and the FBI to ask whether the two people found in the stairwell had been trampled, but no one could give me an answer.

So many of the witnesses said “it was surreal—just like a movie.” Perhaps that’s what the gunman thought, too. One more illustration of life imitating art. With the area secured, LAPD officers walked us up the ramp—which was littered like a minefield with abandoned suitcases, shoes, and cell phones—and past the shattered glass to the Tom Bradley International Terminal. Although the police quickly interviewed us all, it took the LAPD and the FBI seven hours to decide that most of the witnesses could leave.

Officers told us that no buses, cars, or taxis were allowed to use Century Boulevard to get to the airport. My son and I walked one mile from the Bradley terminal to the nearest street where cross traffic was permitted. Hundreds of people pulled their baggage along an empty Century Boulevard. Others hauled their bags toward the airport, hoping to catch a flight out. A friend picked us up at 5:01 p.m.

The gunman was only 23. The media reported that he was a loner. His family claimed he had no prior mental health issues. Still, I wondered whether his parents, teachers, community, and friends could have been more proactive. As I tried to make sense of it all, it hit me that the links in this chain stretch farther than that.

This young man apparently was hell-bent on seizing both vengeance and glory. How much media exposure is a gunman entitled to command? None, really. What if all gunmen were robbed of their 15 minutes of infamy after they let loose a blaze of gunfire? What if the press abided by a self-imposed moratorium on releasing a gunman’s name and photo? Perhaps we’d have less rampaging shooters. This link in the chain has another, related one: Often the news is a product of the entertainment media.

We have the artistic vision and technological sophistication to create powerful, magical films, TV programs, and video games that inspire, enlighten, educate, and bring hope. Yet we also produce a huge amount of extremely violent entertainment, particularly in the form of video games. The gaming community contends that there is no causal relationship between gaming and violence, but there’s no denying that continual exposure breeds desensitization. Creativity is a two-edged sword: We can forge light or darkness, and that dark edge can slip suddenly and cut deeply. Grand Theft Auto V raked in $1 billion worldwide in one weekend. At $60 per game, it is now in the hands of more than 13 million impressionable gamers. Just a fraction of gamers are alienated loners or are mentally ill, reveling in blood-spattered contests in which killing yields victory and mercy is mocked. But all it takes is one disturbed person. Add Bulletstorm and Call of Duty 2 (in which the shooter can join forces with terrorists to annihilate innocent civilians in an airport), and keep multiplying. This is how we train our sons. We know how much Grand Theft Auto V earned, but how much will it cost us?

Like many in L.A., I work in the media, in advertising. On some level all of us in the business—advertisers, movie studios, producers, game developers, film and TV writers—sense that we bear responsibility for crafting the real world we live in and for our ever-eroding sense of security. If anyone believes we enjoy some special immunity from the violence that the real world unleashes, they are mistaken. Just as my son and I were not immune. We are so smart, so clever, so technologically evolved, but are we simply devolving into a semiautomatic Wild West?

What happened at LAX on November 1 was so much more than a terrorist act; it was the latest in a series of defining events. One unstable individual shut down the world’s sixth-busiest airport for the day. He stranded thousands of passengers around the globe. He forced the City of Los Angeles to use precious resources to pay for police and emergency response. One man lost his life, and for a while at least, we all lost our sense of security.

Thirteen: The social fabric of Los Angeles is woven with party glitz, and every weekend extravagant bar mitzvahs commemorate a boy’s rite of passage into adulthood at age 13. Such celebrations are carefully planned and selected for a date convenient for family and friends. Years after those boys become men, it’s unlikely they will recall the exact date of their bar mitzvah. But my son and I will always remember his: 11/1/13—the day when love and responsibility overrode chaos and fear and he turned back toward the ramp to find me. Love trumped fear that day. Love trumped hate that day.

Sue McCullough is a media consultant and screenwriter. This is her first story for
Los Angeles magazine.