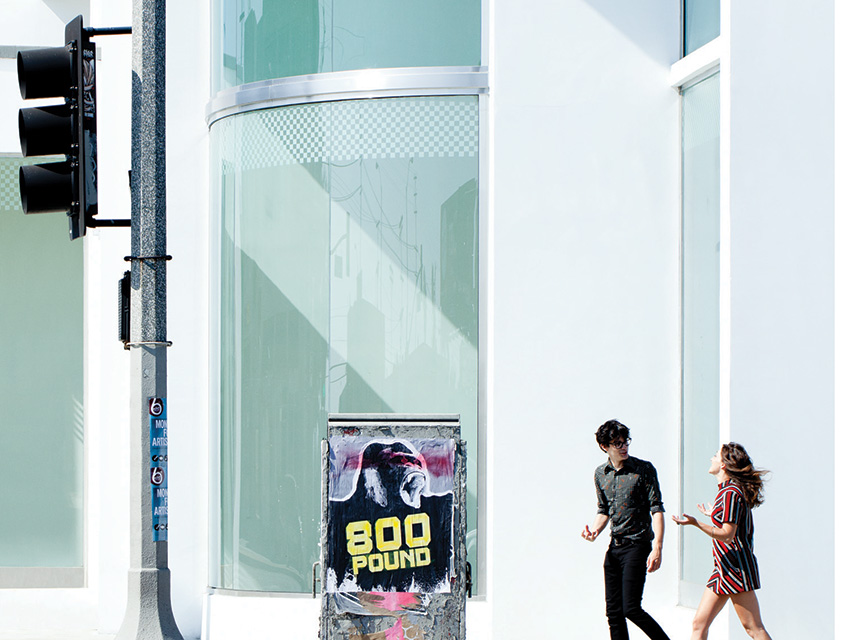 The concrete-coloredmetal boxes that house the controls for L.A.’s traffic signals are the wallflowers of the boulevard. Drab by design, the cabinets are meant to blend in. Yet they occupy prominent curbside real estate, which makes them the ideal canvas for the post-Shepard Fairey provocateurs who’ve been turning Los Angeles into a sprawling gallery of graphics. Rosie the Riveter as a tatted, Mohawk-ed punk; feral cats; sly slogans (“Your Favorite Artist Sucks”); a little girl in a gas mask—the images range from hilarious to grim, personal to political.

With pseudonyms like Destroy All Design, Free Humanity, Alec Monopoly, Septerhed, and Bankrupt Slut, the people behind the posters are known as wheatpasters for the water-based glue they use. They’re carrying on a tradition that dates probably before Toulouse-Lautrec’s time, and in L.A. to Robbie Conal, whose posters of presidents Bush and Reagan dotted the streets in the ’80s and ’90s. Though some are full-time artists, most are graphic designers who do street art in their off-hours. What drives them is what has always driven street artists: the unalloyed freedom and broad exposure that the cityscape allows. “There are no curators,” says Septerhed. “You don’t have to sit and wonder whether anyone likes your work or not. You put it out there and see what the world thinks.” (At least that was the case until MOCA mounted its huge retrospective Art in the Streets, which runs through August 8.)

Often conflated with taggers, wheatpasters see themselves as a breed apart. The city views them that way, too. Posting on traffic boxes is punishable by citation or arrest, but the Department of Transportation has neither the money for nor the interest in pursuing wheatpasters in the way it does taggers. “Where we can, we paint boxes over,” says Bruce Gillman, spokesperson for the department. (Wheatpasters refer to the cleanup crews as “the Buff.”) In fact, pretty much everyone seems to leave them alone. “It’s not like we’re a bunch of ninjas running around,” says Destroy All Design. “You’d be surprised at how during the day people see what we do and accept it as part of the norm.”

Photograph: A poster from the artist Destroy All Design at Fairfax and Melrose avenues