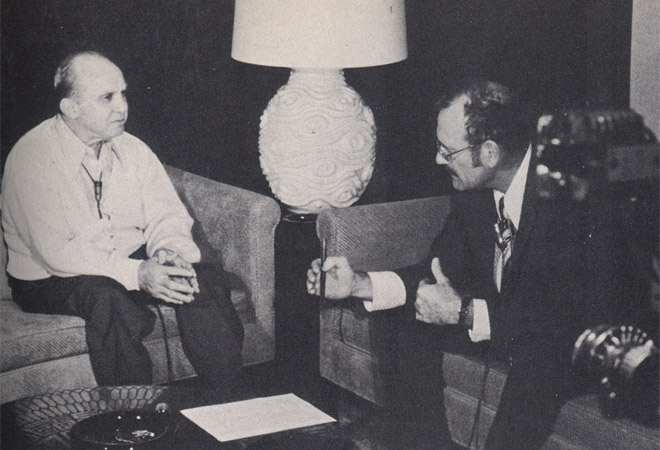 Bill Gilson, a KTTV reporter, is the only Los Angeles newsman to interview Mickey Cohen since his release from prison. The following report is based on his conversation with the former mobster last month.

Eleven years in federal prison have made a shambles out of the Mickey Cohen an earlier generation of Southern Californians knew and enjoyed during his more sinister salad days. The Mickey Cohen who came home to Los Angeles in January of this year is a physically broken man; reduced by the attack of a fellow inmate from a preening, prideful gangster to a graying, faltering cripple wearing borrowed clothes.

But being allowed to return to Los Angeles was “like being born again,” he says, after spending over a decade of his life in federal penitentiaries in California, Washington, Georgia and Missouri.

The face of the city has changed drastically since Cohen was imprisoned in 1961 for federal income tax evasion, and so have the people. Clothing styles are for another time and place than the era the once elegantly-dressed Cohen left behind, flanked by federal agents, his hands cuffed in front of him.

“They’re not for me, those clothes,” Cohen said of the brightly hued styles worn by today’s male. He looked down at the mis-matched sweater and trousers he had borrowed from his brother, Harry. “This is the first time I’ve worn the same clothes two days in a row. One of the things I was looking forward to was getting dressed when I got out. But I’ve just got to wait and get myself together and get my clothes.”

Cohen still has the fetish for cleanliness he had during his heyday as the reputed king of the Los Angeles gambling underworld.  He still washes his hands several times a day and repeatedly dry washes the curved handle of the gold-toned, tri-tipped cane he needs to lean on these days in order to move even haltingly.
Cohen said he knows ‘nothing about that crippling attack except what he was told later in court during the trial of a damage suit he brought against the federal government. (Although he won the suit, he claims he hasn’t yet seen a penny of the nearly $200,000 judgment.)

The lead-pipe armed assailant, according to Cohen, was known to prison authorities to be mentally out of step with other inmates at the Federal Correctional Institution at Atlanta, Ga. Cohen said he had never met the man before, nor to his knowledge had he ever seen him before.  Yet the inmate scaled a 12-foot wall in the exercise yard at the Atlanta prison, dropped to the floor of the compound in which Cohen was relaxing, and bludgeoned the Los Angeles mobster to the ground with a lead pipe.

Cohen’s skull was crushed. He was in a coma for several long weeks, a coma which prison medical authorities for a time believed would deepen into death.  When he finally emerged from unconsciousness he was partially paralyzed, in need of intensive medical care. And bewildered. “This is not to brag, but I was
considered one of the best-liked prisoners anywhere I was, either Alcatraz or Atlanta. Even the warden asked me, ‘Mickey, how in the hell can something like this happen to you? You’re one of the best liked guys in prison.’”

Cohen has not consciously surrendered to his infirmities. The high-pitched voice is still tough, his thinking process apparently not impaired by the injuries. But there is an unexpected turn to some of the concerns he expresses.

For instance, can anyone imagine a Mickey Cohen of the ‘40s or ‘50s talking about prison reform? Today he says he feels it is his “duty as an American” to make those thoughts known, “particularly with regards to the federal system,” which he says he feels “should set the pattern.”

Keying Cohen’s concern for reform is what he characterizes as the “unbelievable” problem of homosexuality in the federal prisons to which he was assigned.  Prison staff members, he said “are part and parcel of it … they go along with it, maybe they kinda feel it keeps the population calmer.”

Anyone sentenced to prison, asserts Cohen, needs “God’s help” to escape attack by what he describes as an organized homosexual element which is tacitly sanctioned at best or ignored at worst by prison authorities. “My morals, my standards in life,” declared Cohen, “have always been kind of strong, particularly against homosexuals of any kind. And I can’t see why the things I consider wrong, or things the general population considers wrong, shouldn’t be corrected.”

Cohen’s new freedom is on a medical parole from the Federal Medical Center at Springfield, Mo., to which he was transferred following the attack on him in Atlanta. The medical release recognizes his physical inabilities, and while it makes him answerable to a local federal authority, it places few restrictions on his travels or on the persons with whom he associates.

Cohen poked an emphatic hole in the air with the forefinger of his right hand when he recalled he had told the parole board  that it might as well lock him up again if it wanted him to “turn my back on the people I once knew.”

There is still a fire in Cohen when he talks about his flaps with Los Angeles police in the days before it took the Internal Revenue Service to sock it to him.
He was rousted so many times for unjailable, unprovable offenses that an official at the MacNeil Island Federal Prison in Washington state came to Cohen’s defense, claiming that Los Angeles police officials spent so much time chasing Cohen-whom he  characterized as a small –time hoodlum-that they let the big-time
crooks in Southern California literally get away with murder.

Who was responsible for those years?  ‘The big trouble was with former Police Chief William H. Parker,” said Cohen. “It was like he had a personal vendetta.” It was true the late Chief Parker didn’t like Cohen, nor the gambling element and the violence it incurred. Parker’s men nailed Cohen and his confederates at every opportunity, but more often than not failed to come up with sufficient evidence to take them to court.

Cohen knew as he recalled those long ago clashes that times have changed. Chief Parker is dead, victim of a heart attack in 1966. Mickey Cohen couldn’t even attend the funeral.

Now Mickey has returned as a curiosity piece in the city where his activities used to command front-page headlines. To an earlier generation that remembers him as the Mickey Cohen, he’s back, but he’ll never be the same.