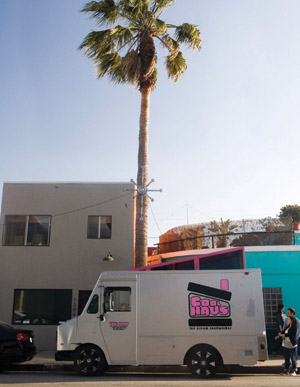 Bool BBQ’s truck has set up shop outside the E! Entertainment building along the Miracle Mile, and there’s a scrum of people eating and waiting to eat. A cyclist in a Giro d’Italia outfit waits his turn. So do two workers in Dockers and rumpled shirts. In the front, a woman in incredibly high suede heels places her order at the window, while the guy behind me snaps pictures of the scene with his iPhone. » Food trucks have become something of a motif—maybe mania is a better word—on the L.A. streetscape in the past year. Jamaican jerk, French crepes, Korean bibimbap, Southern chicken and waffles, samosas, dim sum, grilled cheese, old-school tacos, new-school tacos, pita pockets, buttermilk biscuits—suddenly you can get a couple hemispheres’ worth of cuisines from a galley kitchen on wheels. Clustered behind the UCLA Medical Center or along a dispiriting stretch near LACMA, the city’s fleet of brightly colored food trucks has inspired hungry flash mobs, spawning street life where there wasn’t any. In L.A., that’s a good thing. » Despite all the recent clamor, the city has had a long-term relationship with food trucks. Roach coaches have supplied construction sites for decades with greasy burgers and Mentos, a Klaxon signaling their arrival. It’s probably safe to say few people took mobile food seriously—or had any reason to—before taco trucks began plying neighborhoods with lengua and carne asada and cemitas, the sandwich roll from the Mexican state of Puebla. Docked in El Sereno and Highland Park and Boyle Heights, sporting modest names such as Gorditas Lupita’s and topped with gill-like vents, they’ve become woven into the city’s fabric. The food can be uneven from vendor to vendor, but standing streetside, eating a taco filled with stewed meats and cilantro has a way of making a person feel more connected to our disconnected metropolis.

A year and a half ago, Roy Choi, a former hotel cook, rolled onto the streets with a variation on the theme. The Kogi truck melded two cultures in one kimchi quesadilla. It wasn’t just how the fermented and spicy Korean cabbage ignited the Mexican standby; the layers of flavors felt like a compression of the city itself, and so did his truck, with its giant graffiti logo looking as if it had been lifted right off the concrete banks of the L.A. River. Announcing his arrival with a tweet rather than a horn blast, Choi was soon attracting lines of people hungry for something different. He was followed by droves of other itinerant kitchens—some of them original, others knockoffs, and most launched with the help of Road Stoves, a downtown operation that provides everything from the logo-wrapped vans to the insurance to the supplies.

Food trucks, the new ones at least, are not the modest enterprises that have anchored Latino neighborhoods for so long. You can find ones proffering artisanal soda pairings (Frysmith), recherché ingredients such as pimento-spiced Yakima salt (Vizzi), and eco-mindedness (the Green Truck with its grass-fed beef). At times, though, it’s as if they use the excuse of being mobile to take liberties that no restaurant could get away with: A worker goes from handling money to making meals in one truck; food sits out unrefrigerated in another; at a third, the cranky counterman refuses to turn down his music, even though customers can’t hear him speak. For now it’s a seller’s market, which means that the people waiting for their meal don’t always get what they want before the teeny kitchens run out of food. “We’re done,” the guy operating a Kogi truck (there are four now) announced to the queue one afternoon and began packing up. A little contrition—or something less cavalier—would have been swell. I suppose one has to expect some potholes along the road as Angelenos redefine their food scene.

Haitian and Jamaican trucks abound in Brooklyn, and Portland, Oregon, has a central square devoted to food carts. But I can’t help thinking that mobile gastronomy has reached a high point here, given the breadth—cultural and physical—L.A.’s fleets must cover. Food on wheels: What could be more natural for a city built around the automobile? Owners of brick-and-mortar restaurants complain about such mobility, maintaining that the trucks siphon off the lunch rush. They may be right, but to see a long line at one truck and none at another is to understand that competition between them is brutal. Outfitted with clattering utensils, the rolling restaurants draw on principles of convenience that have defined American street food since the first pickle was sold from a barrel. But being so attuned to notions of branding and social networking, they’re propelling a proud tradition out of the era of the sepia print and into the digital age.

Their food can be bloody good, too. That Bool BBQ taco al carbon was magnificent. The fiery slaw defined the meat, playing off the flavor of the grill with a combination of heat and acidity. Whether it was more Korean than Mexican, I couldn’t tell, but as I wiped my chin and pushed the paper napkin through the truck’s trash flap, the amalgam seemed completely of Los Angeles. By two o’clock the truck, along with the other three behind it, had brought in their garbage cans and lowered the blinds over the order window. The driver of one truck sat behind the wheel, a sandwich clenched in his hand, finally eating his own lunch. In a few minutes, they’d driven off, and the sidewalk was already back to being empty.