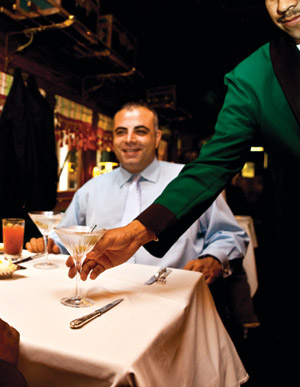 Raymond Chandler, the besotted prince of L.A. noir, is said to have once signed a contract during a three-martini lunch to write a screenplay. The contract stipulated that he could remain drunk while finishing The Blue Dahlia, and he did so inside of two weeks. Now that’s American efficiency. » Whatever happened to that time-honored ritual, the olive-spiked lunch trifecta? When I recently sat down in L.A.’s citadel of old-school capitalism and cholesterol, the Pacific Dining Car, and announced my desire to revive the custom, an attentive waiter named Daniel confided, “You are only the second three-martini lunch I’ve served here in 13 years.” » This was my plan: three gin doubles (the equivalent of a 12-ounce beer can of grain spirits), one wedge of iceberg lettuce smothered in Roquefort, and one 16-ounce rib eye with creamed spinach. I’d brought along an older acquaintance, whose longtime job running a large corporation made him an expert on the business lunch. “Up into the ’70s,” he said, half a martini down, “the managers making deals were hard-charging guys who’d come up through the ranks, and you’d see steaks and martinis at lunch any day of the week.”

Making deals? I could already feel an amphibian glaze coating my eyeballs as I nodded dumbly at the second drink and my cheeks were lighting up like Christmas trees. “You’re beginning to look drunk,” my friend observed as Daniel delivered a steak the size of a Fendi bag.

People have theorized that the three-martini lunch died because of the power breakfast. But my friend cited another reason: increasing competitiveness.

Back in the day, the boardrooms of American business were WASPs’ nests: Jews, women, blacks, and anyone who didn’t attend Choate were shut out. The lack of competition meant more time for elbow bending—time we can’t imagine wasting today. Juicy steaks and icy cocktails have been replaced by succulent BlackBerrys and refreshing Webinars.

Sometime into my third martini I noticed that the combination of dry-aged protein and nonstop gin was energizing both my mind and body. No longer was I blinking at the world like a blushing salamander. Now I felt like a Master of the Universe.

“Here’s a news flash,” my friend slurred, holding up his wristwatch. “You and I have been sitting here for four-and-a-half hours.” We’d argued politics, traded jokes, talked about women, and laughed until Tanqueray shot out our noses. “It’s this kind of camaraderie,” he said, “that’s really been lost with the three-martini lunch.”