Home Entertainment Industry Lunch: I Said Dressing on the Side 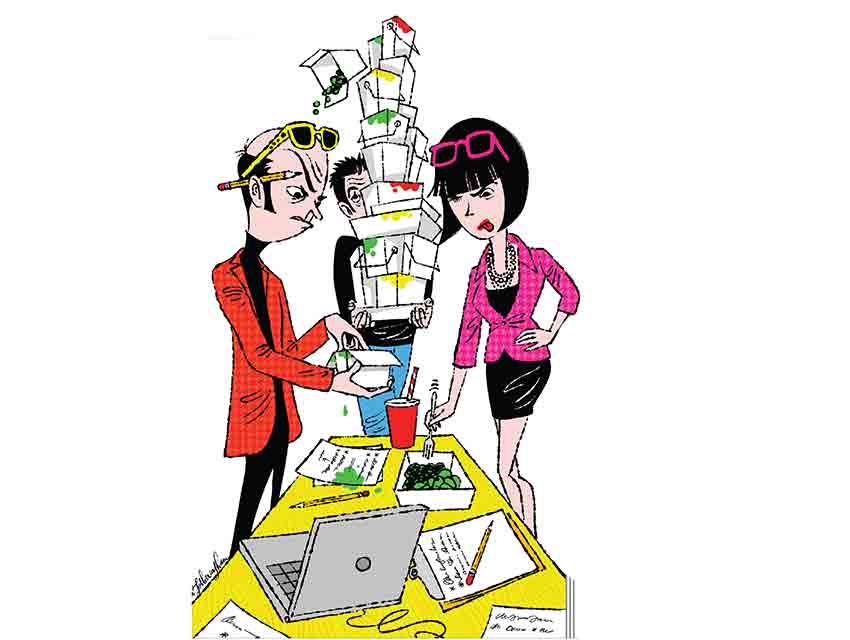 When you move to L.A. to work in Hollywood, there’s no clear path. But if you don’t get broken down and don’t give up, you’ll get there. That’s what being a production assistant is all about.

I’ve worked as a PA at DreamWorks and at Sony. Being a PA is very much like a hazing ritual. The goal is to get a reputation as someone who’s really hard-core and unflappable. But, oh, man, do you have every opportunity to be flapped. Especially when it comes to delivering lunch.

Lunch pickup is a job that PAs who work for TV shows typically do for the writers and producers. It is daily torture. It never gets better. It never gets easier. Imagine you are Indiana Jones going deep into some temple to capture the sacred stone and then running out of the temple past the huge rolling boulder and the poisonous spears. When you get back to the office and show the person who ordered the sacred stone what you’ve brought them, they’re, like, “Didn’t I have a side salad with that sacred stone?” That is daily lunch pickup, and I did it for nine months for a sitcom at Sony.

Here’s how it worked: First you’d take down orders, with all their specifications. No onions. Coleslaw instead of fries. Extra fries. You learned to pay attention, checking your roster to make sure you didn’t forget anyone. You’d fax the order in, to the Farm or Kate Mantilini or wherever. Then you’d get in your crappy car (all PAs have midsize crappy cars) and drive to Beverly Hills during the lunch rush. Parking was hell. You needed to park close because you had to get out fast before the food got too cold. You’d hear about it if it was cold. So you’d hit handicapped spaces or pull up to red curbs, putting your flashers on.

You’d go into the restaurant, hoping the food was ready. It never was. When it finally came out, you’d have to check the orders, which was complicated by the fact that because a lot of these places have gone green, you couldn’t see through the cartons. So you’d be dealing with four bags of crappy cardboard containers that some person in the kitchen had scrawled some hieroglyphic code on. You’d take each container out, cross-reference it with your list to make sure not only that everyone’s lunch was in there, but that it was correct. Messing up the order of anybody serious—like the producers—could get you fired.

After checking the orders, you’d get the lukewarm food back into the bags and head out to your car, which you hoped was still there. Then came the mad dash back to the office. You’d be calling your fellow PAs as you drove, or they’d be calling you to say, “Where are you?” To which you’d say, “Well, I’m picking up lunch!”

There’s something about those bags—they’re too big to fit snugly on your floorboards so they won’t fall over and yet just small enough to slide around in your backseat. Often it would be one hand on the wheel, one hand making sure the precious items in the front seat didn’t tip over. While you were frantically driving, there’d be a lot of slamming on the brakes. Stuff would spill. Sometimes whole dishes spilled onto the floor. The only chance for redemption was calling in and letting everyone know it had spilled, then delivering the rest of the food and going back. Or getting something from the studio restaurant, which nobody ever used. The commissary? I don’t think so!

When you got back to the office, there was the fun of seeing the expressions on people’s faces as they opened their preopened cardboard container and took a nice, hard look at their congealing food. Their faces said total nonsatisfaction. As in, “Well, I guess I can keep this down.” Then, comments: “I think this was supposed to be grilled.” In general, it was, “OK, I’m miserable now because of you. But it’s fine. I’ll get over it. Until tomorrow.”

PLUS: The Ice King
Our PA also dishes on how Jeffrey Katzenberg takes his meetings on the rocks

At DreamWorks Animation, they have free lunch. So as a PA there, you don’t have to pick up food. But you do have to get Jeffrey Katzenberg’s ice. At the campus in Glendale, there is an office. It is unmarked. And I think it’s guarded by some type of demon. In that office is a refrigerator. The refrigerator makes a specific kind of ice that Jeffrey likes, a cylindrical ice, with a hole in it. This refrigerator, which has its own office, makes ice. For Jeffrey. Only for Jeffrey. Jeffrey’s life is meetings. And the meetings are in different rooms. But this refrigerator office is not near any of them. It is the PA’s job to figure out exactly where Jeffrey is going to sit at each meeting and then to place, to his right, a certain type of glass filled to a very specific level with the special office ice. Next to the glass goes a little bottle of Diet Coke. Here’s the problem: Meetings are often pushed. Jeffrey’s earlier meeting is running long. So all of a sudden the perfect glass of ice has water in it. Now it’s a judgment call: Can I get this glass filled with fresh ice and be back here before the meeting starts? And you’re running down hallways, through buildings, with a glass of ice in your hand, and people see you and laugh and say, “You better hurry up! Jeffrey’s coming!”