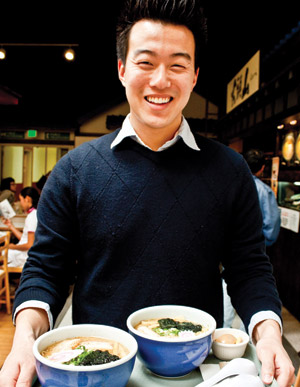 In L.A., similar hubs of top-notch ethnic cuisine have sprung up inside the malls of immigrant communities from Torrance to Koreatown. Grab a tray and dig in.

Mitsuwa Marketplace
Come lunchtime, this upscale mall (above) is host to what seems like the bulk of Torrance’s dense Japanese population. Around small wooden tables, locals slurp bouncy ramen in pork broth from Santouka and oyakodon (chicken, egg, and green onion simmered in a sweet sauce and served over rice) from Miyabi-Tei. To cool off, try an iced ma-tcha from the tea experts at Yamamo-toyama. Can’t tell udon from soba? The plastic models outside most stalls are a helpful visual aid. » 21515 S. Western Ave., Torrance, 310-782-0335

Koreatown Plaza
The windowless food court is stuck in the basement of this 1980s-era shopping center. But though atmosphere is lacking, crowds are not. The mostly Korean clientele (always a good sign) flocks here for fiery red broth with pieces of bone-in pork or hunks of spicy fish. Juicy pork cutlets from Tonkatsu House are breaded and fried and accompanied by shredded cabbage slathered with—what else?—Thousand Island dressing. » 928 S. Western Ave., L.A., 213-382-1234

Koreatown Galleria
Just blocks from Korea-town Plaza, the Galleria’s top-floor food court is spacious—and of this century—with large windows and a railing overlooking the shops. Skip the pricey Japanese spaghetti bolognese for a light lunch of yachae boribap from the Cham Cham Cham stall. A bowl of rice and barley is topped with a crisp romaine salad and a fried egg, a seemingly innocuous trio that becomes addictive once mixed together, especially when it’s with a little chili sauce.» 3250 W. Olympic Blvd., L.A., 323-733-6000

Mercado La Paloma
Once an abandoned warehouse, Mercado La Paloma opened in 2006 with hopes of revitalizing the neighborhood just south of downtown. Among the vendors at the squeaky-clean marketplace is newcomer Mo-Chica, whose Peruvian ceviche is the city’s brightest. Chichen Itza specializes in the flavors of the Yucatán, such as slow-cooked pork tacos and fat tamales that are baked until crispy. » 3655 S. Grand Ave., L.A., 213-748-1963