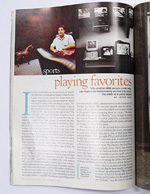 In the euphoria of the moment, as nearly 250,000 fans converged on Staples Center for the Lakers’ first victory parade in a dozen years, the urge to rhapsodize about championships yet unwon was hard to resist. Shaq promised a repeat. The mayor announced the birth of a dynasty. A sign in the crowd proclaimed THE NEW PHILLENNIUM STARTS NOW.

But what are the odds of that? The real odds, cold and calculated, of back-to-back Laker crowns?

Pete Korner knows the answer. He is the operations manager of Las Vegas Sports Consultants, the principal oddsmakers in Nevada’s legalized sports betting industry. L.A. boosters may have a lot riding on the next NBA season, which begins October 31, but Korner cares little whether the Lakers live up to their billing as the team of the ’00s or collapse into a posse of overpaid rappers. Uncertainty, probability, the law of averages—those are Korner’s loyalties, the formulas that reduce on-court excitement to a business of point spreads and future lines. “We trust our gut,” Korner says, “but it’s always with a knowledge of what the percentages are.”

Las Vegas Sports Consultants was founded in 1982 by Michael “Roxy” Roxborough, a former restaurant manager from Vancouver, B.C., who came to town in the ’70s to make it as a gambler. Launched at his kitchen table, with nothing but a pencil and calculator, the company grew into a state-licensed, Internet-powered gaming service that today supplies odds—plus news on trades, injuries and weather conditions-to almost every casino on the Strip. “Roxy came into it just as the town was shifting from the little independent joints to the major casinos,” says Bill Thompson, a gambling consultant who teaches public administration at the University of Nevada, Las Vegas. “He was very smooth and very professional, with a computer mentality, which was in such contrast to the good ol’ boys chomping their fat cigars.” Bookies still refer to his service as “Roxy’s,” even though he retired last year to Thailand. It is now owned by a subsidiary of SportsLine.com, which is affiliated with CBS Sports and trades on Nasdaq for about $18 a share.

The odds get made on the second floor of a concrete bunker in a business park carved from the desert, surrounded by palm trees, smoked glass and a view of McCarran International Airport. There are eight TVs, a wall of clocks set to foreign time zones and PCs on every desk. It could pass for a stockbroker’s office if not for one old-school concession: a collection of framed stills from The Hustler, the Paul Newman-Jackie Gleason pool-shark classic. Here, last summer, even before the NBA finals had concluded, Korner and the three other basketball oddsmakers on his staff—most of them, like him, middle-aged ex-jocks in khakis and golf shirts—began the process of setting the 2000-2001 futures. Nobody needed to wait for the Lakers to defeat Indiana to know which team deserved to be favored next year. But by how much? Compared to whom? At what price? “We’re trying to make it fair for the people who are betting and lucrative for the people who are booking,” says Korner, a Cal State Northridge cinematography major who was announcing sports scores for a Vegas tout line when Roxy, impressed by his phone voice, offered him a job 13 years ago.

First, a dose of reality: In only 18 of the NBA’s 54 years has a team successfully defended its title, which means that two of every three winners have failed to repeat. Last season’s defending champs, the San Antonio Spurs, began as 9-2 favorites but succumbed to injuries and took an early vacation. The year before, the Chicago Bulls were 3-1 favorites to win a fourth consecutive title, but then Michael Jordan retired and the odds mushroomed to 100-1. “Everyone in L.A. wants Showtime again,” says Korner, recalling the back-to-back Laker wins of ’87 and ’88. “But I don’t know. The motivation and desperation and everything that a team needs to get that second one—it’s hard.”

Determining the statistical probability of a Laker victory, however, is not really Korner’s job. He is paid to predict how the betting public will perceive the Lakers’ chances of winning—a question that sometimes has little to do with what takes place on the court. In 1999-2000, L.A. began the season at 5-1, which would have brought a nice payoff, except that even die-hard fans were reluctant to put their money where their mouths were. This time around, Lakermania will be at a full roar “They’re never going to be four-to-one or five-to-one again,” Korner says. “Maybe three-to-one, if they were any other champion. But with them being so close to Las Vegas, we know we’re going to see a lot of L.A. money. Nobody’s going to give you a break on the Lakers.” The trick is to spread the money across the field so that losing tickets always cover the cost of the winners—and the house makes a profit, no matter the result.

This is how it works: If he were to start the Lakers at, say, 3-1, Korner would add those numbers together (3+1=4), then divide into 100 (100/4=25). If his second choice were to be 6-1, he would follow the same process (6+1=7) and again divide (100/7=14.29). He would combine those sums (25+14.29=39.29), then continue adding to the tally while working his way through the league. After accounting for all 29 teams, the total should fall somewhere within the mysteriously ideal range of 143 and 155, a scale that has proven through the years to generate the most balanced volume of cash. “It’s just a formula we use, age-old percentages, created by some mathematician before I ever came around,” Korner says. If the total ends up being too high, then too many teams have low odds—a situation that favors the bookmaker but that might discourage bettors from risking their money. If the total comes out too low, then too many teams are listed as long shots—a tempting offer for bettors, but one that could prove catastrophic for the house.

In the end, Las Vegas Sports Consultants settled on an opening line of 5-2, meaning that a $10 bet on a winning Laker team would return a $25 profit. But that is only the start of the action. The company’s odds, which appear in more than 125 newspapers as “America’s Line,” are the equivalent of a manufacturer’s suggested retail price. Every casino, every bookie, is free to tinker with the numbers, raising or lowering them to reflect the actual amount of money wagered. “We’re trying to set a standard, but it really doesn’t have to be exact,” says Korner, a 41-year-old Bay Area native with the center-parted hair and crooked grin of a Dustin Hoffman. “The season is so long. Even if you make a small blunder, there’s a lot of things you can do as a sports book manager to even out your money.”

By August, two months after the opening line was released, most of the casinos were already compensating for early play on the Lakers. At Caesars Palace, the odds on L.A. were down to 9-5; at Imperial Palace, 7-5; at the Mirage, a flat 1-1. “If the Lakers were to win it today, we’d lose money,” says Robert Walker, the director of race and sports book operations of Mirage Resorts, which also handles bets for the MGM Grand, Bellagio, Treasure Island and New York New York. To lure away some of that cash, Walker had not only lowered odds on the Lakers but raised his line on almost every other NBA team, including some that came fairly close last year to derailing the champs. Fans will still generally bet the favorite. But professional handicappers are always hunting for a bargain, a competitive team such as Portland or San Antonio or Miami—at 6-1 or 8-1 or 10-1-undervalued to offset the glut of Laker money. “Our job is not to say who’s going to win,” Walker explains, “but to be in a position to make a profit regardless of the winner.”

As long as money continues to pour in on the Lakers, the casinos will do fine; there may be a lot of winning tickets to pay off, but the price—already low—will just get lower, and nobody will be taken by surprise. If your hometown allegiances should happen to favor the Clippers, though, the casinos will be even more delighted. Las Vegas Sports Consultants opened L.A.’s “other team” at 350-1. Within a few weeks, Imperial Palace was shopping them at 500-1. Granted, a $1,000 bet could be worth half a million dollars, a potential career breaker for a bookie. But Ed Salmons, the Imperial’s sports book manager, is willing to roll those dice.

“You could play the NBA season mathematically a billion times and there will never be a scenario where the Clippers win,” he says. “It is literally impossible.”