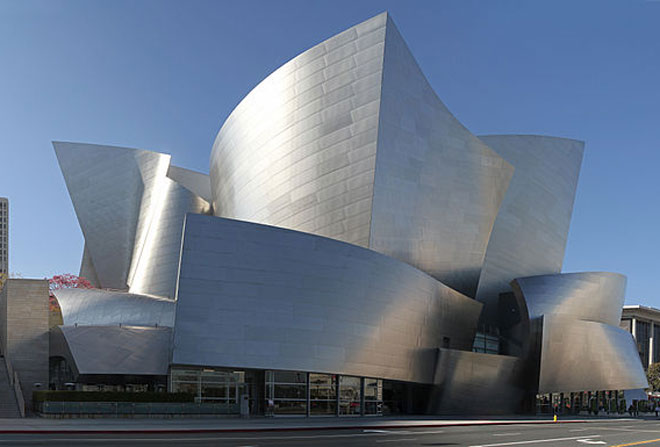 It’s safe to say that Frank Gehry has attended more interesting dinner parties than any other living architect. Take for instance the night in 1974 when Gehry was asked to dinner at the Malibu house of billionaire Norton Simon. Around the table that evening sat Simon’s wife, the actress Jennifer Jones, dressed in a sunny Halston outfit; Max Palevsky, a cofounder of the Intel Corporation and prominent Democratic fund-raiser who had recently helped place Tom Bradley in the mayor’s office; Dorothy “Buffy” Chandler, the iron-willed arts patron and wife of Los Angeles Times publisher Norman Chandler; and David Niven, the guest of honor, looking dapper as usual. At the time, Gehry says today, he was “considered the maverick, off-the-wall, doing chain-link fences and all that shit.” He was also an outsider to L.A.’s WASP establishment—a Jew from Toronto born Francis Goldberg who had changed his name while attending USC in part because he was told he couldn’t get into the campus’s architectural fraternity with a name like Goldberg. His best friends were artists like Larry Bell and Ed Moses, two other outsiders with whom he’d formed the band the Five Bags of Shit, and asking him to a dinner party that included the wife of the Times publisher and David Niven was a bit like having a Black Panther over for tea. He was exotic, but you certainly wouldn’t hand him the keys to the city’s arsenal.

Sally Kellerman had been invited over as Gehry’s date, but Simon seemed even more interested in bringing together the architect and Buffy Chandler. Famous for raising the $33.5 million it took to build the Los Angeles Music Center and the Dorothy Chandler Pavilion, Chandler had also stepped in to save the Hollywood Bowl in the 1950s, when the property was shuttered and the orchestra thrown out of work for being $200,000 in arrears. Not long before Simon’s dinner invitation, Gehry had completed a temporary remodeling of the Bowl’s acoustics—suspending or standing 60 giant cardboard “sono-tubes” like Greek pillars around the shell—but Simon was unsure if Chandler knew of the architect. Gehry’s reputation then rested mostly on smaller projects for idiosyncratic clients—a hay barn in San Juan Capistrano that was as much minimalist sculpture as it was shelter, a rhomboid-shaped, corrugated metal house in the Malibu hills for painter Ron Davis. The ongoing Hollywood Bowl redesign was Gehry’s first civic project in Los Angeles, and as of that night in 1974 it was just a bunch of cardboard. Chandler’s taste in architecture was as well known as her domineering personality. She had chosen the Music Center’s architect—Welton Becket, whose firm had designed the Capitol Records building, the Cinerama Dome, and Parker Center and whose own house sat just down the beach from that night’s gathering. But was Chandler aware of Gehry?

At the table Simon made a passing attempt at introductions. “You know, Buffy,” he said, “Frank is doing our house. We’re very proud of what he’s doing—it’s a lot of work.” Either Chandler was caught up listening to another conversation or she just didn’t hear; no glimmer of acknowledgment crossed the 73-year-old woman’s face. The talk drifted on until Simon made a second attempt. Once again, Chandler seemed not to hear her host. Before the vegetable course arrived, Simon made one final go at it, saying, “Buffy, Frank here is …”

“Norton, stop it,” Chandler snapped, ignoring the architect beside her and looking directly at her surprised host. “I know who Mr. Gehry is. I know what he has done. And I know what he is doing. I don’t like it. And I don’t want to discuss it anymore.”

Just then a server carrying the vegetable platter entered the dining room, stumbled, and showered the entire course on Gehry’s suit. As Kellerman tried to brush dinner off the architect’s lap, Max Palevsky—breaking an awkward—leaned over and politely asked, “So what other work have you done that I might know?”

“Well,” Gehry replied, “I did the Ron Davis house up the beach here.”

Palevsky stared back at the architect, then blurted, “That piece of shit?”

Buffy Chandler died on July 6, 1997. By the time of her death, she had long known that the Dorothy Chandler Pavilion, which she had worked so hard for and which was named in her honor, was being vacated by its orchestra for a new home designed just 24 years after the Music Center’s completion. What’s more, the new Walt Disney Concert Hall had been thought up by the man she last saw wearing the vegetable course.

The architect, however, was not alone in his task. Disney Hall is the invention of three organizations: Gehry Partners, the Los Angeles Philharmonic, and Nagata Acoustics, each of which is represented by its own figurehead. On the last day of June this year, inside the newly completed hall at the Los Angeles Philharmonic’s first private concert, it was impossible to miss them. They were everywhere: the Black Brigade.

Esa-Pekka Salonen is the brigade’s most steadfast member, lounging preconcert onstage dressed in a black T-shirt, black slacks, black shoes, black socks, and black belt. Even when relaxing, the Philharmonic conductor is always enveloped in black. Gehry, the brigade’s second member, sat beside former mayor Richard Riordan and was dressed in a black gym shirt and one of his many black Issey Miyake suits. Several years ago the architect designed a store for Miyake, and since then, black suits and shirts have arrived as regularly as checks in the mail for Gehry. The brigade’s third and final member, dressed in a black suit, black shirt, and black shoes, was Yasuhisa Toyota, the Japanese acoustician who has spent the last 14 years working on Disney Hall’s sound and is never, ever seen AWOL from a black getup.

The Music Center has made a calculated $274 million wager that the Black Brigade’s hall will be the best in the country. Gehry designed the space—his first concert hall—and Salonen will have to adapt the orchestra. But if Disney Hall is a failure, if it shows up lampooned in the national press as Philadelphia’s Kimmel Center did two years ago opening with poor acoustics, the blame will fall most heavily on the third member of the brigade, Toyota.

Toyota moved almost unnoticed through the crowd, the dark wisps of his sparse beard and thinning hair whirling around his head like a lazy dust devil, his quiet gaze drifting across the elements of the hall’s acoustic design. Overhead floated the ceiling’s 15 wood “pillows,” puffy, convex shapes of Douglas fir conceived by Toyota and the Tokyo-based firm Nagata Acoustics to reflect sound back to the orchestra and outward to the audience. Pressing against the outer border of the pillows, like two long, golden fish bellies, were the hall’s angled side ceilings, sitting at an almost 45-degree slant and meant to catch what skyward music the pillows missed. The room’s free-form walls were laced with warrens of fabric hidden behind latticework—compartments whose contents could be adjusted to help “tune” the hall should stray echoes be heard bouncing through the architecture. Dominating it all were the 51 fir pipes of the German-built organ, popping over the stage like the contents of a supersize fries order.

This feature was originally published in the October 2003 issue of Los Angeles magazine.