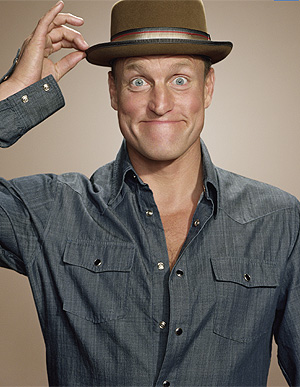 I can’t say. I have spent hours with Woody Harrelson, and I can tell you I’ve never met anyone as vague about his life. His vagueness is not deception. He’s not evading us. He is, in fact, one of the most genuine, affable actors you will ever meet. It’s just that Harrelson is pulled all over the map by ideas and theories that overwhelm and can leave him sounding vague. “Here’s the reason why raw food makes sense,” he says at Cru. As usual, he is dressed in casual hemp, his head shaved. “People talk about ‘Are you getting your proteins?’ or ‘Are you getting your carbs?’ Can you imagine horses or hippos sitting around asking, ‘Are you sure you’re getting enough vitamin B12?’ ”

“Uh, water?” asks a waiter in a wispy beard, who looks like Dave Grohl’s cousin.

“Well, what other kind of liquid refreshments do you have?” Harrelson drawls. When the waiter suggests a lemon-ginger shot with cayenne, Harrelson says, “Yeah, I might go for some of that.” His sentences, like Bill Clinton’s, begin on warm Southern asphalt before petering out in broken gravel. When he talks, he veers between closing his eyes in concentration to angling his gaze sideways, as if he has just spotted a glitch in the ether. “And how about this paysto ravioli with the kale salad—that also looks like the way to go here.”

We know his work from fi lms by Oliver Stone, Milos Forman, Spike Lee, Terrence Malick, and Robert Altman. (This month he shows up alongside Will Ferrell in the comedy Semi-Pro.) The compass of his thoughts, however, we know from his favorite books, which include Tom Wolfe’s The Electric Kool-Aid Acid Test, Noam Chomsky’s 9-11, Ayn Rand’s The Fountainhead, Bruce Lee’s Tao of Jeet Kune Do, and John Robbins’s The Food Revolution. As a whole, they are reading matter for a dreamy romantic, a political cynic, a heroic enthusiast cut adrift by society’s outward norms who prefers looking inward.

Books excite Harrelson. Recently he was reading about a prison escape and became so agitated that his feet began sweating and he was forced to take off his shoes. Robbins’s The Food Revolution moved him even more. Sometime after he realized that dairy is evil,

but before he discovered hot food is poison, Harrelson ate his last beef cut—“over at Jimmy Burrows’s house,” when the director’s wife made steaks. “What we don’t get from cooked food is enzymes,” Harrelson says. “They’re the life force of food, and they’re destroyed when anything gets heated above 118 degrees.”

Harrelson downs his lemoncayenne shot in three gulps. “Holy shit!” he gasps. He looks like a man who’s just had a runin with an enzyme. “Damn! Whoa! That’s a wake-up call.”

He found Cru while shooting Semi-Pro downtown. The movie follows a hard-luck basketball team as it stumbles through a season in the now-defunct American Basketball Association. Set in the gaudy ’70s— there’s more ABBA in Semi-Pro than ABA—the movie lets Ferrell pretty much run the court. Harrelson plays the straight man. “I think that’s cool,” he says. “You’ve got to look at it from the vantage point of the pass, of the assist being as important as the shot. Jerry Lewis had his Dean Martin.” It was Ferrell who coined Texas Acting Mafia, the honorifi c for Harrelson’s group of friends who include Matthew McConaughey, Luke and Owen Wilson, the Quaid brothers, and Tommy Lee Jones. “We’re all buddies—well, maybe not so much the Quaids. But the Wilsons— I consider them part of the family. We refer to ourselves as the Bickerson Brothers.”

Harrelson grew up in Houston, moved as a teenager with his mom to Ohio, learned that believing is the most important thing in life, and briefly considered preaching. “If you look up ‘Woodrow’ in the name book, it says ‘sentimental sermonizer,’ ” he says. Instead, at 23, he wound up as an understudy in Neil Simon’s Biloxi Blues, where he came to believe that the best thing to do was run off to Tijuana and marry the playwright’s daughter. (Turned out it wasn’t; they divorced ten months later.) In Cheers, Harrelson’s trusting nature brought the gullible Woody Boyd to life, and he went on to perform well in basketball and bowling movies like White Men Can’t Jump and Kingpin. But like John Travolta before him, Harrelson found himself cast against type in a Quentin Tarantino script, Natural Born Killers, which was immediately followed in 1996 by The People vs. Larry Flynt. Critics and audiences were kinder to Travolta than to Harrelson; the fi lms did not prove to be the step up he’d wanted. “For a while there,” he says, “I found myself thinking, ‘Jesus, what’s the importance of this profession?’ ”

Recently, sitting beside Owen Bickerson at 30,000 feet above the Pacifi c, Harrelson began preaching. “I went on for a half hour, I forget about what—some philosophical thing. But I asked Owen what he thought. He said, ‘I think we’re going to have to fi nd you a soapbox.’ ” In no particular order, Harrelson’s sermonizing runs from raw food to saving old-growth forests to legalizing hemp production to doing away with household cleansers and cell phones. “I won’t use a cell phone,” he says, “because I don’t want to radiate my mind and get a brain bleed.” He volunteers with the Surfrider Foundation, the Earth Island Institute, the Rainforest Action Network, and PETA. He is the personal hero of two-thirds of the diners that night at Cru, and each one tells him so. Despite their endorsements, Harrelson never gets grouped with George Clooney and Barbra Streisand and the Hollywood Left.

“I think I live just too far away from Hollywood to consider myself part of Hollywood,” he says. He resides in Maui, somewhere off the grid with his wife and three daughters, where he picks mangoes, eats coconuts, swims in the tropical waters, and reads voraciously. And he has been known to smoke some of the finest weed on God’s green earth .

Harrelson’s father died last year at a Supermax prison, convicted of the 1979 for-hire murder of a federal judge. It was from his father that he inherited a taste for the odds. “I do like to gamble,” Harrelson says, surveying the plates at Cru, now empty of raw vegetable curry, raw cashew ravioli, raw pomegranate chorizo. “You know, in Japan they say if you are born on your dad’s birthday, you are your dad—so it’s funny. I’ll gamble on anything. I’ll even gamble that you can’t hold this dinner in. I’ll put up $100 on one-to-five odds that you lose it.”

He stands up. The eff ects of raw food on the digestive system are notorious, and right there in Cru, Woody Harrelson accidentally farts.

Not that it mattered. No one had laid down odds on that .