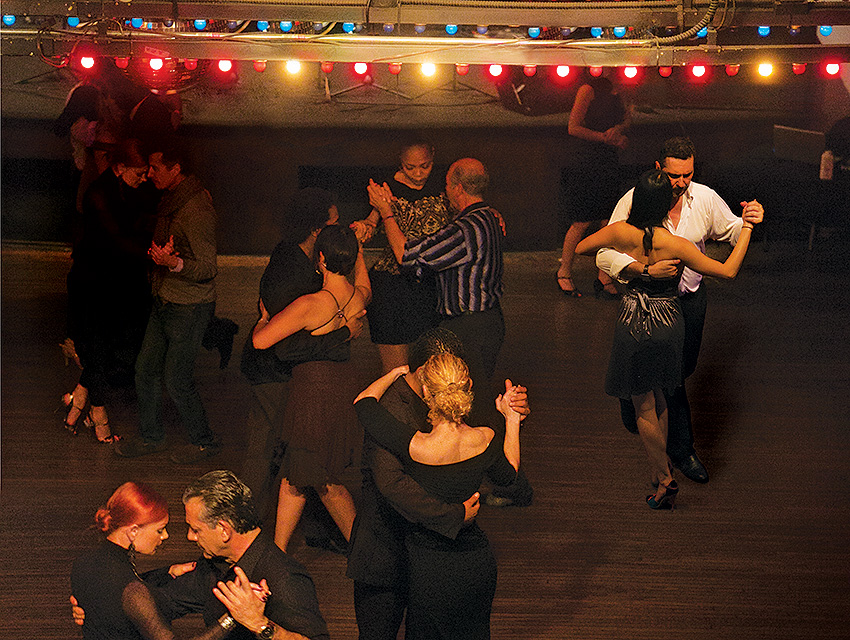 The quest for personal growth takes many forms in Los Angeles, but few have as lush a soundtrack as Argentine tango. Any night of the week, from minimall studios in Sherman Oaks to balmy promenades in Santa Monica, people of all ages and backgrounds seek perhaps the only kind of therapy that requires fabulous footwear. If you think the hugs at AA meetings are intimate, try the airtight embrace of the tango, which requires the kind of chest-to-chest intimacy seldom attempted outside one’s bedroom. Tango rejects the self-help rhetoric of relentless positivity and frantic self-improvement, instead inviting you to express the emotions in the music—good, bad, and whatever lies in between.

“People come to tango seeking connection, friends, passion, sensuality, but they don’t know the change it can bring,” says Makela Brizuela, a gregarious Argentine woman who hosts a spirited practica (practice dance) at the Electric Lodge in Venice on Monday nights. “Tango transforms their lives. Posture, confidence, self-esteem, everything.”

I discovered tango through actress Jamie Rose, who wrote a self-help book (see “Baby Steps,” opposite) in which she applies the wisdom of partner dancing to relationships. I met Jamie at a party, where I watched her captivate a roomful of people with a few impromptu tango moves. I immediately cornered and interrogated her. I have always wanted to partner-dance. My father was known at family weddings for his mean jitterbug. As a child, I loved to watch old musicals with him on late-night cable as I imagined myself inside the “moonlit” gazebos of studio back lots. I soon figured out that dancing in suburban New Jersey in the 1980s wasn’t much like Ginger Rogers and Fred Astaire gliding over a cruise ship deck in 1933. I logged countless hours at bar mitzvahs, stifling a yawn while rocking at arm’s length to Bonnie Tyler’s “Total Eclipse of the Heart” with a boy who would rather have been head banging to Motörhead. Even though I basically enjoyed myself, I felt frustrated that even the slow dancing of my generation seemed oddly disconnected. Apparently I’d been born in the wrong half of the 20th century. My secret fantasy, in which I dance cheek-to-cheek with a gallant partner, always seemed destined to remain only that: a fantasy.

But Jamie assured me that I had not been condemned to forever dance alone in a circle of halfhearted girlfriends. In Argentina, she told me, tango provides a vital physical lexicon for social interaction and often is the foundation on which people build new relationships—by mingling at parties and nightclubs. To learn how to tango, Jamie said, I wouldn’t have to renew my passport. I’d just have to be willing to step on a few toes.

The Argentine tango is a dance and musical genre spawned in the slums of late-19th-century Buenos Aires. Its influences include European and African traditions, since those Argentine neighborhoods were then absorbing Spanish, Italian, and other European immigrants, who in turn were joining settlers from other South American countries. Over a century the dance has evolved into several distinct styles, all of them built on improvisation. Tango is not a democracy—it has the strictest lead-follow dynamic of all partner dances. For the man, it requires absolute commitment and for the woman, profound levels of trust and surrender. Bottom line: It’s sexy as hell.

After meeting Jamie, I think for weeks about the need to inject a bit of mystery into my life. As a working mother of a young child, I’ve accepted that for the time being I have to put spiciness on the shelf in favor of meeting deadlines and cutting up oranges to take to soccer practice. But some days there just isn’t enough Wellbutrin or Kundalini yoga to make macaroni collages exciting. I’m yearning for something new and uniquely my own.

One morning, I drop off my son at preschool, then pull the car over and text Jamie: I want to dance. I’m intrigued by her claims that partner dancing lowers the levels for cortisol while raising the ones for oxytocin as it makes you feel more confident, balanced, and in shape. I tell all of this to my husband but fail to convince him that tango lessons would be a better use of his spare time than performing in his Rush cover band. So I’m relieved to learn that you don’t need to bring a partner to tango classes. In fact, most people show up solo.

My introduction to tango begins with the search for some proper stilettos. I visit the home studio of tango instructor Yolanda Rossi, where an alcove is lined floor to ceiling with gorgeous dancing shoes for sale—some tame, some flat-out slutty. Yolanda, an Argentine who has been teaching tango here for 20 years, lounges in leggings and a sequined T-shirt, reminiscing. Turns out that Juan Perón, the president of Argentina, had been a proponent of tango, so once he was overthrown in the 1955 coup, the military junta discouraged its practice. By the end of the decade, as rock and roll became more popular, tango lost its cachet. The current revival in Argentina dates from the early 1980s, when democratic rule was restored and the stage show Tango Argentino became a phenomenon. The spectacle toured the world and inspired a new generation of tangueros and tangueras.

Before the mid-’80s, one of the only places to do the tango in the L.A. area was at the Argentine Association of Los Angeles in Burbank, where you can still find a lively scene. But after Tango Argentino came through town, L.A. tango took off. Yolanda recalls a Bolivian restaurant in the Valley—Nora’s Place—whose tango parties began to attract lines around the block. On any given night, you might find one of L.A.’s most famous tango aficionados, Robert Duvall, dancing to a live trio with a famous blond singer on his arm. Yolanda can’t remember the singer’s name as she tells me this, until her daughter calls out from the other room, “Madonna!”

I’ve almost forgotten: I’m here for heels, not just a history lesson. I opt for relatively sensible nude open-toed shoes that add three-and-a-half inches to my five-foot-six frame. I consider buying a pair with less lift, but Yolanda convinces me otherwise. “You will have plenty of years to wear flat shoes when you’re an old lady,” she says.