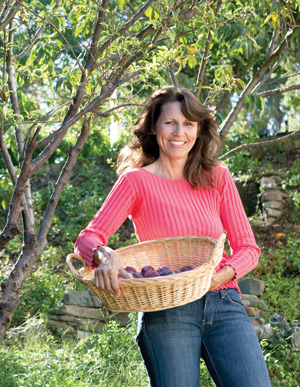 One can be forgiven a long pause when approaching Ellen Mercier’s Brentwood home. Are those 16 beautifully shaped and groomed trees along the wall not all citrus, a tree that normally looks like a moth-eaten scarecrow? Are any flaws in these lemon, orange, and grapefruit sculptures not perfectly camouflaged by the dark green hedge behind them? Is that hedge not a fruit-bearing machine of 40 or so strawberry guavas crafted into a screen?

When the former stockbroker moved to the 12,500-square-foot villa and its half acre of land in the late ’90s, there was no question of its destiny: fruit garden. “Ellen, a healthy environment and healthy food make a healthy mind,” said her father, Walter, which explained his obsession with organic gardening long before its coming-of-age. He had also been defined by the Great Depression, when he went from privileged son of New Yorkers to refugee on his uncle’s Massachusetts farm. He ultimately saw the bad fortune as good, replicating the farm—California style—as he raised his family in Northridge on a fireman’s wages.

Even though Ellen Mercier could now buy out Gelson’s on any given day, she is her father’s daughter. She hired landscape designer David Oberman to create the original blueprint that marries fine sight lines with nonstop food supply. Just as life had been with her parents and the two dozen children they fostered, Mercier’s current pleasures are simple and of the table. Take pizza night, when her son Brian, 25, and twins, Brent and Nick, 23, invite friends, and the young women are sent out to harvest lavender for plate-side bouquets as they drink lemonade from homegrown fruit. Or the holiday get-togethers, when her persimmons become a Christmas pudding and the New Year’s cocktail is her own fresh pomegranate juice mixed with tequila. She’s especially fond of the brisket with cooked apricots (Royals, from her high-producing tree); the cobbler of yellow peaches, sliced and frozen so they can be used throughout the year; the salad of pineapple guava flowers (part of the hedge) and blackberries; the low-cal sauce of plums (Weeping Santa Rosas) on pork; the candied zest from her beloved kumquats atop ice cream. The kumquat is so prolific that she shares its costly fruit (up to $10 a pound in the market) with a friend who makes marmalade. Mercier beams at the thought of it.

When the trek from garden to kitchen is a matter of steps, she’s perplexed that others don’t walk the walk. At her neighbors’ house, the lemons fall and rot. Time must be taken out of a busy lifestyle when a food-bearing tree goes in, Mercier warns, and a commitment made to no pesticides. Her hibiscus hedge is an elegant backdrop for the pomegranates, loquats, and Algerian tangerines (“the perfect balance of sweet and sour”). It is also a whitefly magnet, so she sprays the plants with liquid Tide to abort whitefly hatchings.

Mercier invests in careful trimming so that dead leaves and branches are removed and the fruit hangs in a museum-quality array when the lights come on at night. “If the plants are unattractive, it looks like a run-down orchard,” she says. “The way I look at my garden, I have a responsibility to see it the way my neighbor sees it.”

Sometimes she has a change of heart. This winter a low-producing pluot will come out. The strip of grass the boys played on will probably  become a mulberry grove like the one she saw in Lake Como.

Then there’s the rivalry. Brent’s college volleyball coach, Marv Dunphy, started it, or at least that’s the story. The Pepperdine coach was at the house for a pregame event, and Mercier saw him casing the yard. By his count, Dunphy said, he had more trees at his Malibu property. She had her suspicions. Her strawberry and pineapple guavas alone numbered 70, and she had 45 additional trees. The hedgelike guavas didn’t qualify, he said. Without them, his 50 had her beat. Dunphy—with an Olympic gold medal and four national championships—is a formidable competitor. But he doesn’t know whom he’s up against, this woman on a mission. See the newly purchased Hass avocado and Valencia orange in pots near the front gate? They’re just the beginning.

Persimmon
Diospyros Kaki
The tree is such a high producer that there’s enough to share—and a lot of takers, especially at $4 a fruit in the market. Mercier uses an antique mold to make a steamed pudding each Christmas.

Pineapple Guava
Feijoa Sellowiana
Surprisingly versatile for a modernist-looking tropical. Mercier puts the blossoms in salads, makes the pulp into a nectar, and uses a concentrated form of the juice as a sweetener in baking.

Hass Avocado
Persea Americana
Mercier’s favorite sandwich ingredient comes from this less-than-comely tree. She placed hers in front of a hedge of Carolina compacta cherries to help the awkward limbs blend into the background.

Kumquat
Fortunella Margarita
Another tree that keeps on giving. Though Mercier makes the fruit into a sauce for chicken and concocts a candied zest from the rind, she ends up inviting a kumquat-loving friend over to strip the prolific tree.

Eureka Lemon
Citrus Limon
A second freezer is kept stocked with ice trays of frozen lemonade so that there’s always a ready-to-make drink for guests. Mercier often incorporates the fruit in her table decorations.