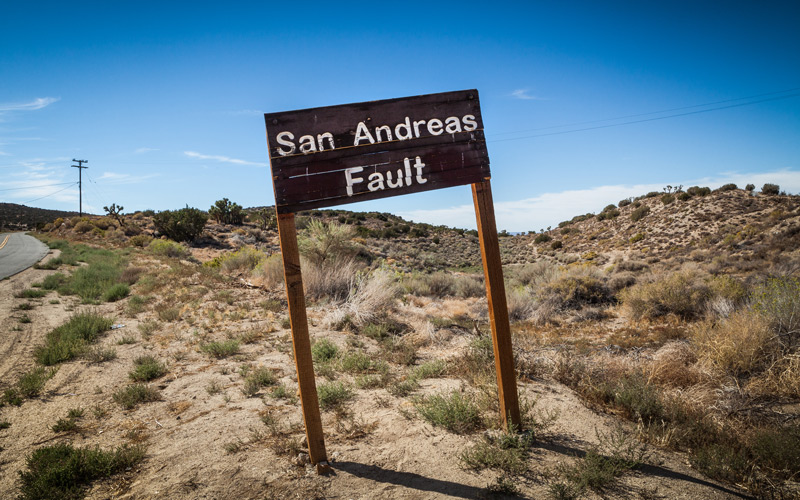 When is the next potentially damaging earthquake expected to occur in Southern California?
Anytime.

Why is the San Andreas Fault such a big deal?
Stretching 800 miles through the state, the San Andreas is the boundary between the Pacific and North American tectonic plates. As the plates move past each other (at the rate of about two inches a year), they stick together at certain points, causing energy to build up in these areas. Eventually that energy must be released—scientists liken it to finger snapping—and that’s when there’s an earthquake. Because of its size and location, the San Andreas accumulates roughly two-thirds of all the seismic energy building along the state’s fault lines.

Didn’t the San Francisco earthquake in 1906, the Loma Prieta in 1989, or even the Northridge in 1994 release some of that energy?
Northridge didn’t occur along the San Andreas (in fact, nobody even knew about the fault that caused the Northridge quake). The 1906 earthquake did, and Loma Prieta may have (experts disagree), but they happened too far north to help L.A. The San Andreas is divided into a northern section, beginning in Cape Mendocino, and a southern section, which begins about 120 miles north of Fort Tejon (where there was a large quake in 1857) and extends through the Coachella Valley (last large quake there: 330 years ago) to the Salton Sea.

What size do scientists expect the Big One to be?

So does a can of Dinty Moore stew and a bottle of water count as a preparedness kit?
With so much ground to cover, first responders may not get to you for a week or more. Set aside a gallon of water per person for each of those days (any available tap water will likely be contaminated), and fill your kit with medications, batteries, copies of important documents, and the like. Keep a kit in your car, at home, and at work.