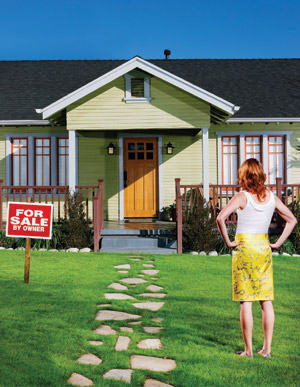 House hunting makes planning a wedding look easy. But last year, when property prices started to fall, my fiancé, Michael, and I saw a chance to do something we thought would take maybe a decade to achieve: buy a house in an upscale (or at least up-and-coming) neighborhood not far from our Mid City jobs. For years I’d been watching from my apartment window as the one- and two-bedroom bungalows around us sold for $700,000 and $800,000. But with the housing glut, it seemed that if we pulled together every penny we could, got a little help from our parents, went without cable TV, and gave up our spot in a rent-stabilized Silver Lake fourplex to live in a scrappier area, we just might be able to afford a home. A foreclosed home, that is. The hunt was on. I would have never guessed that the psychological highs and lows of real estate could dwarf those of committing to another person for life.

Early in my search I subscribed to an e-newsletter by Jenny Durling, a local Keller Williams Realtor. It showcased new listings and foreclosures from a multiple listing service, or MLS, database that matched my desired price (under $400,000) and location (anywhere from Silver Lake to Highland Park). In two months I saw only one place that had the right combination of price tag and move-in condition. (After watching Michael demolish our windowsill with a hammer to install an air conditioner, I knew we were not do-it-yourselfers.) It was a 1920s ranch house in Montecito Heights with a new kitchen, a reshingled roof, and fresh paint. The listing said “short sale.”

Since the sum of my real estate knowledge was limited to what I’d seen on HGTV’s House Hunters International, I thought a short sale meant the owners wanted to sell in a short amount of time. As Durling would later explain, it is the opposite. A short sale takes place when the seller owes more on the house than it is worth and tries to get the mortgage lender to accept an offer from a buyer for less. The process of getting bank approval can be long, with loads of paperwork, which discourages real estate agents and rules out buyers who need a place ASAP. I was the ideal short sale candidate, however, because unlike my wedding, my home purchase had no deadline.

When I arrived at the house, Durling was waiting, her blond bob bouncing as she strode across the lawn in heels. From the outside the place was as handsome as the pictures: a low-profile gray structure on a corner lot with palm trees and a firehouse red front door. Inside, though, wrinkles showed. That romantic fireplace in the living room? Not up to code. The bathroom—bright pink—had a host of disability rails and an elaborate cowboy scene etched into the glass shower door (which Michael insisted was a plus). The floor of the dining room was elevated two inches above the rest of the house, the shoddy work of some flipper five years before. Still, it was livable, the neighborhood was stocked with luxury SUVs, and the backyard had its own Meyer lemon tree. Sold.

Well, not quite. There was a time when you could snag a house with nothing but a pinkie swear to pay for it. Today you can’t write an offer unless you’ve been prequalified for a loan—which we hadn’t been. Durling recommended a broker who could tell us how much we could really afford. It wasn’t what we’d thought. The mortgage itself would be no problem, the monthly payment being just a touch more than our current rent. What we hadn’t taken into account was the $420 a month in property taxes, $60 a month in home owner’s insurance, and up to $155 a month in mortgage insurance (what the hell is mortgage insurance?). Add to that the $8,000 in closing costs, which the buyer pays on a foreclosure house or short sale, and we were in over our heads. We didn’t make an offer, leaving the citrus tree to somebody else. (To give you a sense of how not short a short sale can be, six months passed before the house was listed as sold.)

The wedding reared its needy head. Vendor deposits were coming due, and did you have any idea that it costs $6,000 to rent a portable kitchen? I wrote an e-mail to Durling: “Given our financial situation, I think we’re going to take a break from the house hunt until after the wedding.” I heard from her three minutes later. She hadn’t read my note. “I just popped into this house in Eagle Rock,” said Durling. “I think you should see it.” Weary from the roller coaster of a search, I reluctantly asked for the lockbox combination and hopped in the car.

When somebody says there’s a three-bedroom at $369,000 in Eagle Rock, you’d be right to picture a crack den or roomy camping tent. But to see granite countertops, stainless steel appliances, new floors, and a fenced-in, 8,000-square-foot backyard, I understood why the listing said “hurry”—despite the salmon stucco exterior.

So much for the hiatus. I dialed Durling from inside the house. “Let’s do it,” I said. The following Monday morning, Michael and I sat across from Durling at a shiny wood table in her office to write an offer. You may be hearing tales of homes going for $30,000, even $75,000 under the asking price. That may be so in the Inland Empire. It is not the case for abodes on the frontier of hip. We settled on $375,000 with 10 percent down—the bare minimum for a down payment today but all we could afford. I walked out of the office feeling confident. Six thousand above asking price seemed generous in this market.

For the next 24 hours I did exactly what everyone told me not to: started planning the landscaping motif. Succulents would be smashing. I looked into opening a wedding registry at Home Depot. I imagined gliding through the living room during dinner parties with a tray of canapés. I pictured my husband and me huddled by the fire for movie nights. I saw my future children celebrating birthdays with a bounce castle in the backyard. Then the phone rang.

“There are 20 bids,” Durling said. “Put in your best offer.” During a slow market, it’s common to see houses priced below their value to spur a bidding war. But when a house gets 20 bids its first day on the market, the “foreclosure crisis” can’t run too deep. We went up to $385,000, which was $16,000 above asking price. It was probably more than we could manage, but I had already mentally raised my kids in that house.

The property sold the following day for $438,000. That’s $69,000 above asking price. That same week we booked our honeymoon. Seven days in the Caribbean, I told myself, is almost as good as a home.

A month went by, during which I looked at, and passed on, a Spanish-style in Eagle Rock and a midcentury modern in Mount Washington (they were fixer-uppers). Then, trolling through the MLS, I stumbled on the blue Craftsman in Highland Park. There were only exterior pictures online, but Durling found an older set from when the house sold in 2007 for $605,000. The dining room’s original built-ins had been recently rehabbed, as had the wraparound porch, tile fireplace, and exposed rafters. It sat on a 7,800-square-foot lot with a view and included a detached two-car garage, a basement(!), and a terraced backyard. The clincher: It was within walking distance of the York, a gastropub I frequent for spicy cheddar burgers and hand-pulled cask ales. I told Durling I’d meet her there the next day.

You never know what awaits when you walk into a foreclosed home. Owners facing eviction sometimes strip a place down to its wiring. The lawn may have died after months of neglect. Squatters may have invaded. This particular house’s proximity to Occidental College made it an ideal location for a party. Or several parties. Or a nuclear holocaust. There were waist-high piles of trash, dirty jeans by the back door, and hundreds of empty bottles. But scrape aside the scum, and nothing had been damaged. The floors—where you could see them—gleamed, and the woodwork was pristine. The bedrooms were good-size, the bathroom featured original tile, and you could even spot some green in the yard.

Maybe it was the timing of driving up as the sun cast a waning glow on the house, or maybe it was the toxic mix of garbage fumes, but this place cast a spell on me. More than any other I had seen, this house wasn’t just good, it was mine. Michael felt the same way. It was love.

My least favorite episodes of House Hunters are the ones in which buyers view several properties but don’t buy any of them. So I wish I could say that I’m writing this from my Mount Washington home office. I wish I could complain about the agonizing 30-day escrow process and the termite inspections. I wish I could talk about the vegetable garden I’m planting and how impossible it is to tell the difference between cream and ivory paint. But I can’t. I’m writing this at the kitchen table of my Silver Lake apartment.

My friends were right. I couldn’t do a wedding and a house in the same year. It was a matter of money, though, not sanity. L.A.’s seller’s market may be in “crisis,” but prices are still out of reach, even for double-income middle-class households with no kids. Now that the search has been suspended—for the moment—I have a little extra change in my pocket. We upgraded our honeymoon suite to a beachfront bungalow. Still, I can’t help spending hours on the MLS Web site. And every day, it seems, another newspaper article or TV report predicts housing prices will continue to fall this year and next. Thank God, I say to myself, nervously twirling my engagement ring. It can only get worse.